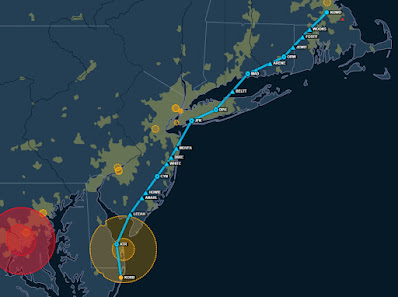 Mary and I have planned this trip a few times, only to have chosen the no-go due to weather or winds.  On our last attempt the weather was clear but headwinds were peaking just over fifty knots, it would not have been a fun ride in our Sundowner.

Once again we penciled in a plan to visit family in Boston and squeeze in a visit with our friends Mike B and his bride Kim. If you follow this blog you know Mike B is also a CFII known for torture sessions, working to keep me proficient.  It sounds crazy, but I really miss those workouts and flying with Mike.

The Weather Look Ahead 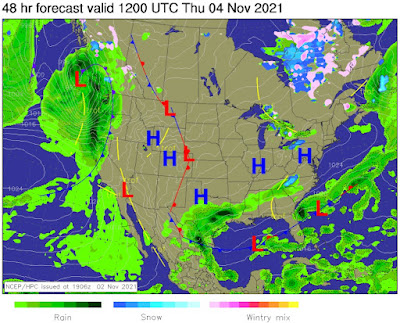 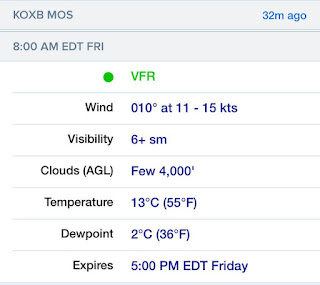 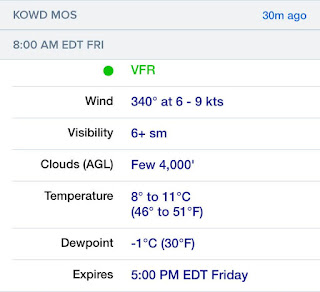 Mary and I took Ziva to the airport on Tuesday for some play time while I topped off the fuel in 3 Tango Charlie for our flight. I also broke out the moving blankets and plugged in the pre-heater since our temps overnight Thursday will be hovering around forty degrees.

I'll head over on Thursday to do my preflight and sump fuel so everything is completed and ready to go for Friday morning.

The presidential TFR will not go hot until 4pm today so we are good to fly our original flight plan. I will still pick up an IFR clearance for the trip north. I also made a quick call to 1-800-WX-BRIEF, a first for me since IFR training days to confirm the TFR times.

Winds favored runway three-two and once my run up was completed I called Patuxent for my clearance. No response. Not a problem, I picked up the clearance with Patuxent approach in the air.Pax handed me off to Dover and once across the Delaware Bay I was handed off to Atlantic City. AC cleared me direct Coyle VOR (CYN) then eventually handed me off to McGuire Approach. McGuire passed me off to Kennedy Approach. 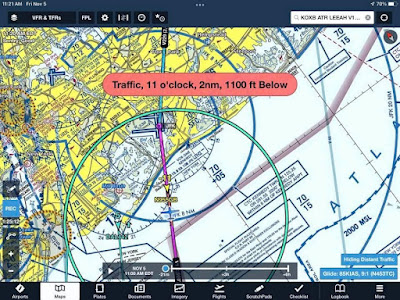 As we crossed the Lower Bay, closing in on JFK, Kennedy approach amended my route.

This route followed the north side of long island and had me cross the Long Island Sound to Bridgeport.

Once in Connecticut I was given direct Hartford (HFD)then destination. Since this was my first time at Norwood (KOWD) I have to say it was hard to spot. I was expecting a bigger airport. 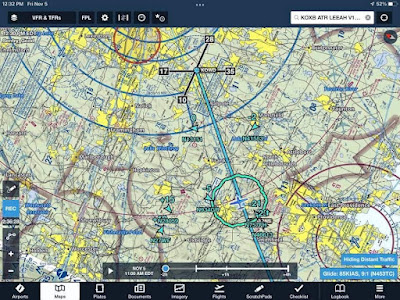 I was number two to land following a piper to  runway three-five. I made a nice landing and taxied clear on Delta, straight into the Flight Level FBO. I took on thirty gallons of fuel and secured the plane for her two night slumber in a heated hangar, to the tune of $100 a night. 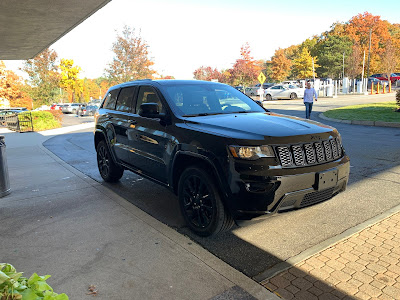 We secured our rental from Avis, located in the same building a few steps from the check in counter at the FBO.  Our ride is a new black Jeep Grand Cherokee, loaded. It was a nice ride.

It’s a good twenty minutes to the Marriott hotel in Newton, but we find our way along I95 north. After we checked in we schlepped the bags to the room.  Holy smokes! The room was at the far right end of the building, second room from the end, I thought I walked a mile.

No sooner we settled in my leg pain hit me.  I forgot to take an Advil this morning, not good. I got the chills and crawled into bed after downing two Advils. Mary covered me with both of our jackets along with the bathroom towels and my sweatshirt. It took forty minutes for the chills to stop and pain to subside.

We had arrived at the room around 2:30 and we were ready to head out the door by 4pm to visit with Mike and Kim. I brought my cane this trip, just in case. Glad I did.

Thanks to the map option on my phone we had directions locked in for Mike and Kim. We could take I95 or follow local roads through town, we decided on the local views. The time difference was just a few minutes. 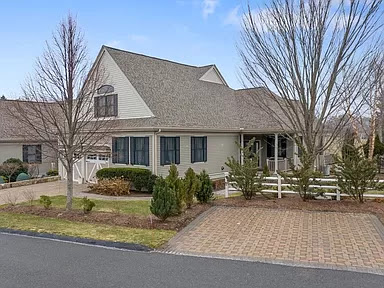 This was our first visit to their new home, it was absolutely beautiful. It has been quite a while since we have been together but as it is with friends we seemed to pick right up where we previously left off. We sat and chatted, enjoyed a magnificent dinner and awesome deserts. 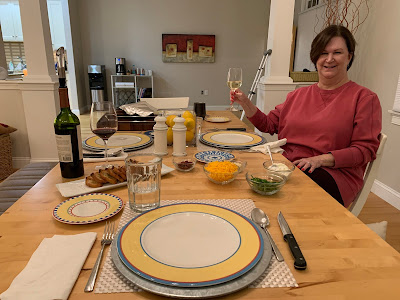 Somewhere around 10pm we decided we should head back to the hotel and give our hosts a break. We had fun conversations, many good laughs, and a delicious dinner. Now I needed to sleep off my food induced coma.

I retraced my path to find our way to the Marriott, enjoying the lack of traffic and business hustle of the town, now in after hours mode.

We each showered then planned for breakfast. I should add as I got dressed I walked into a chair, with no shoes on. Yikes! This was my toe twenty four hours later. Yes, I think it’s broken.

We made our way downstairs to the restaurant for breakfast. Gimpy with a bad right leg and now a tad bit tender on the left foot with a toe that still feels like it was hit with a hammer.
We were quickly seated and had a nice view of the Charles River. I had a ham and cheddar omelet and Mary had eggs Benedict. The food got an ok rating, the service was excellent. 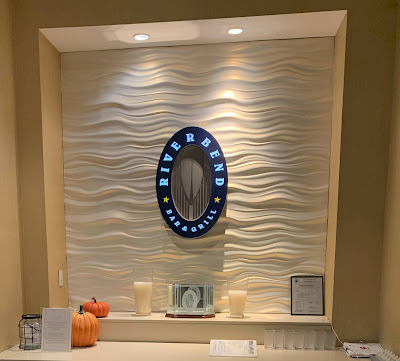 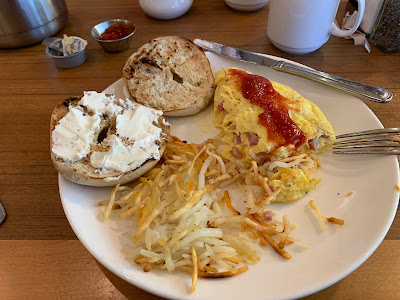 Once we returned to the room, with full tummys, we kicked back and relaxed. Mary exchanged text messages with her cousin, and we awaited Shelaghs arrival. Today we were going to take a tour of the Boston sites. We passed on the duck tour, I’m not comfortable with their safety record. Instead we did a driving tour. Here are the pictures with what I remember of the locations.
We drove through the North end, the Italian area, and the smells of food were amazing. The urge to stop at Mike’s Pastry was almost overpowering, at least until I noticed the line stretched north up Hanover street for almost half a block. The whole mix of people and cars working through the crowded streets was sensory overload for me. We circled back to a few places and explored a few more areas before bugging out of the city. Mary and I had a fun time checking out all the sites and learning the background stories. 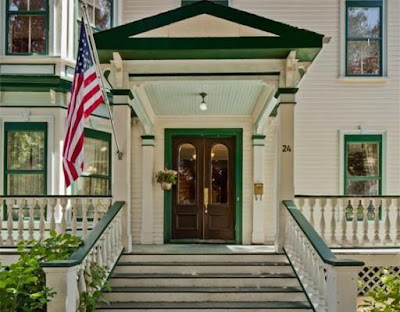 We headed to Shelagh and Fred’s to see their home for the first time. Walking up to the large front porch can take your minds eye back in time. The beautiful front doors opened to a foyer with hardwood floors dating back to the eighteen hundreds and a banister that protected the hardwood stairway to the floors above. Period correct chandeliers were hung and they added the finishing touches on their home. 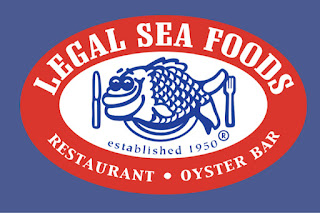 We sat and chatted while enjoying a platter of various cheeses, fig jam, breads and crackers. The group decision was to eat dinner at Legal Sea Foods. Why not eat at the best while in town.
The food and service were excellent. I could not finish my meal but it will come home with me tomorrow morning and be consumed for lunch upon our return to Ocean City.
We sat and talked for a good bit then decided it was time to get us back to the hotel. Goodbyes are never easy but we vowed to return to Boston soon.
I sat in bed and worked on my blog until 11:30pm then called it a night. My bride went night night an hour ago.
The Return Home 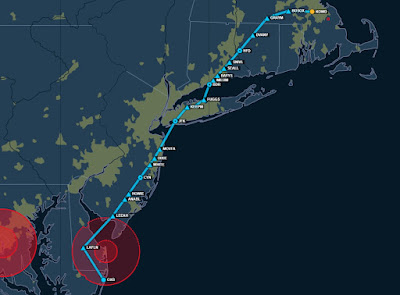 My flight plan was filed yesterday and weather checks were completed. I will obviously have to detour for the TFR over Rehoboth, DE.
Mike and Kim were waiting on the hillside adjacent to the Flight Level FBO to greet us. Mike had a Cirrus sim session in the Red Bird  full motion scheduled, but wanted to see us off.

I departed runway one-seven on the Norwood 3 departure.  OWD.3 requires a climb out on a given specific heading to two thousand feet, then radar vectors to the BOSOX intersection. I was instructed to climb to six thousand and that would be my final altitude. I had filed for eight but six would work and no oxygen would be needed. 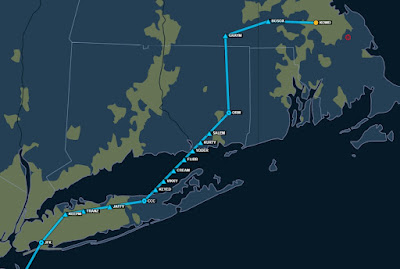 Once handed off to Bradley approach I received an amended route. (Norwich)ORW V16 JFK V1 SBY direct destination. I made the update on Foreflight as I turned direct Norwich then made the updates to the Garmin 480, followed by selecting Execute.
Mary and I rode along enjoying warmer temps then our Friday flight, nineteen vs forty-five degrees today. I was handed off to multiple approaches in reverse order of our north-bound flight. 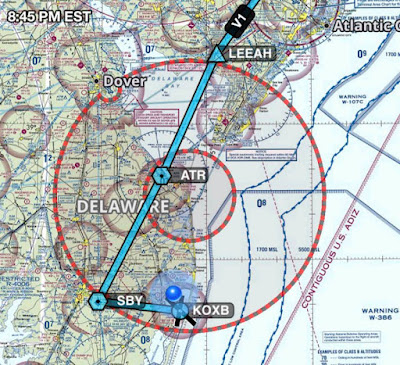 I did have concerns about my routing since it was going to take me through the inner ring of the TFR. As I gave this some thought Atlantic City had another change for me, apparently thinking along the same lines. LEEAH LAFLN SBY OXB. 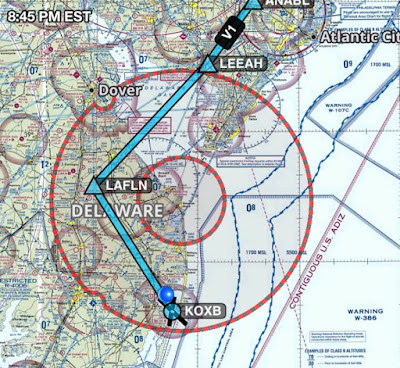 Strange, that was exactly what I had filed for todays flight.  Atlantic City handed me off to Dover approach and with that I asked for lower and direct Ocean City. Dover was a no-go, Patuxent had to be the ATC that turned me loose, which they did when clear of the TFR inner circle.
I let down for ocean city and rode the bumps right down to runway two.  Winds were 040/17G26 which provided an interesting ride until we descended below the tree line. I finished the trip with a nice landing, as confirmed by my bride.
New Airport - KOWD
Hours - 5.4 Round trip flying vs 15 hours driving
Posted by Gary at 11:30 PM

I'm pretty sure from experience that no flight plan survives contact with NY Approach! :-) Even using preferred routes, etc. At least you can roll with the punches. I have come to seriously appreciate having an autopilot when the re-routes come.

But you missed a golden opportunity for a Hudson River skyline flight! (Just don't read my blog post about it from earlier this year, I think my friend Tom is still traumatized from that experience.)

The autopilot does indeed make reroutes much easier. Buttonology kicks in and off we go, now if I only could make a Flight Stream work with the 480 I would have the complete package.