I was running out of time for instrument currency and I needed an approach to keep me legal flying in the system. I really need to take advantage of the wx days we get here in Ocean City and make the hop between GED and OXB to just knock out an approach when I can. 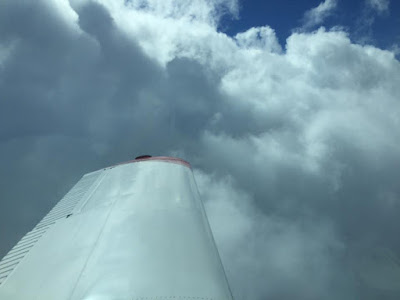 I posted on Facebook looking for a Safety Pilot.  Mike B is out of town and I do miss his torture in the air, not to mention just hanging out with a good friend for the day.  So since I posted I had hoped to hook up with someone I had flown with previously.  For the non-flyers reading this a safety pilot keeps eyes outside watching for traffic and the pilots overall conformance to the approach in other words don't screw up knocking the rust off.  Honestly I wasn't very rusty, shooting approaches is comfortable and flow pretty smooth.
Once I posted on Facebook Jeff F from the Richmond area said he was free.  Excellent!!  I haven't flown with Jeff in ages.  Jeff was once hangared at 33N and we did get to fly a good bit together.  I helped Jeff get his  second plane, an Archer (93Zulu), home from Texas after his purchase.  We had some laughs over that flight today during lunch.  We both learned so much about cross country flying and how bad we both really needed to get the instrument rating.  I also flew in Jeff's first plane, a Cherokee (26Juliet) on my first trip to the aviation mecca, First Flight in Kill Devil Hills North Carolina.
I guess what I'm getting at is a pilot only trusts certain people to be their safety pilot, well, at least I do. I would let my Bride fly with Jeff anytime, so trust is important.
I traded a text message or two and advised engine start and wheels up shortly.  I had filed a flight plan and pretty much got as filed with only a heading on departure that I would need to follow until picked up on radar. Easy peasy, I'm off to enjoy the gorgeous day.
I flew south along the Delmarva peninsula trying to avoid the build ups that were guarding the coast. I managed to deviate, as approved, then return to my initial course direct Cape Charles. Once clear of the Patuxent restricted space I was turned south west direct Richmond, thanks approach for the short cut!
DCA 05/387 FCI SVC AUTOMATED WEATHER BROADCAST SYSTEM NOT AVBL 1505292131-1506022000EST

Smooth flying despite the build ups. I made my way for KFCI via Richmond and couldn't pick up the weather (AWOS), it was mentioned in the NOTAMS as 'unavailable' until June 2nd.  Approach had no NOTAM with that info. Based on the Richmond ATIS info I selected runway three-three. As I got closer I did finally hear the weather at Chesterfield County and advised Approach I wanted to change my approach to the RNAV GPS 15.

I was directed to turn direct DOCEV and expect vectors to final. I agreed and advised whatever is easier for approach. As directed I was turned to final and once established on the approach with the field in view I cancelled IFR.
I made a good landing and turned off at the first taxiway. Jeff was at the terminal and pointed me to parking. I took on 17 gallons of fuel, thanks for your discount Jeff! Once I sumped the fuel we climbed in and hatched our plan for a couple of approaches. I would fly to KPTB, Dinwiddie County Airport in Petersburg, Virginia. 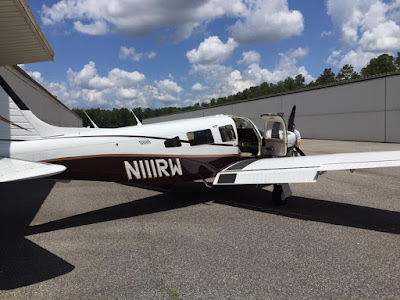 First up was the RNAV GPS 23. We were headed direct ONIKE for the procedure turn/holding pattern and then inbound. I made a nice approach with one drop below the altitude of 2000. Jeff quickly pointed it out as I was making a correction. Everything else looked good and I kept the needles centered.  This was a low approach only and was followed with a climb out pointing us back to KFCI for the ILS RWY 33.
Another nice approach with a decent landing. We taxied in and secured 08Romeo so we could get some flying time in Jeff's Saratoga. We passed on lunch, instead choosing to fly then eat when we get back. Jeff pre-flighted 1Romeo Whiskey and used his neat tug to pull the plane out. I could not imagine pulling this aircraft out with a full belly of fuel.
I had to do some weird aerobic move to get my self in but had plenty of room once belted in. Getting in from the right side is hard on my hip and knee. Jeff fired up 1RW and she really purrs. I was amazed how quiet she was with such a big power plant up front. Of course once the air conditioning was on I was hooked. We taxied out and departed runway one five as I watched the fuel flow 'gulp' increase. 1RW climbed out and just ate up the ground below, a sweet climbing machine and Jeff only works her at 60% power. I loved the glass panel, everything was neat and well organized and Jeff made it just flow.
First for Jeff was the KOFP, Hanover County Municipal Airport  RNAV GPS RWY 16 approach. Jeff worked with Potomac Approach and lined up a second approach into Richmond, KRIC. Jeff made a nice approach with the autopilot and flew it by hand from the Final Approach Fix. Low approach followed by a climb out for Richmond. Approach took us out and around with vectors to bring us back for a nice intercept for the RNAV GPS Z RWY 16. The 'Z' approach is for the airport that has two RNAV approaches to the same runway.
This would terminate in a low approach followed by going missed and returning to Chesterfield. The tower gave us a 190* turn on climb out and it passed us right over the parallel taxiway, it looked and felt like a fly by the tower. I had a good laugh, negative ghost rider, the pattern is full.


I got some stick time as we headed back to FCI. The Saratoga handles very well, I could feel the difference from the Sundowner.  She was responsive, didn't require much trim and just flew really nice, I could see why Jeff made this selection. We entered the pattern and turned final a tad high but Jeff said she floats like a rock. He made it look easy and set 1RW on her mains followed by the nose gear. This is where I really felt the weight difference, this is a big plane.
Jeff took me out to lunch at a pizza place not far from the airport, I can't remember the name. The food and service was very good and it seemed as soon as we sat down we were heading back.
It was a fun day flying and I am looking forward to making the trip again very soon. I saddled up for home and filed for this leg too. KFCI HCM JAMIE KOXB.  I was cleared as filed and soon cut loose for 7000.  The altitude selection was good, climbed above the build ups and only surfing my way through a few between Richmond and the Harcom VOR. Approach was excellent, they always do a great job in this area. I went feet wet and crossed the Chesapeake Bay headed for the peninsula and pointed directly at KMFV, Accomack airport. I turned north at the JAMIE intersection and enjoyed the view and ride to Ocean City.

Traffic was light at KOXB, I heard the jump plane and one aircraft inbound from the north. We coordinated and everything went smooth as I was number two to land behind the south bound traffic. I slowed down as I turned final so the jump plane could depart and as he climbed out I made another nice landing.

Overall a great day flying and once again I beat the instrument fairy to the prize....I'm good until the end of September!!
Posted by Gary at 9:08 PM

Sounds like a fantastic day, Gary! I'm kind of jealous. I'm also afraid that flying in the Saratoga would make my airplane seem like a toy by comparison.

You went to Dinwiddie! The Bear giggled every time I said that the time we met Jeff there for lunch.

Adn what does "the pattern is full" actually mean? For something as (practically) infinitely scalable as a traffic pattern, how can it be full? That always bugged me. Well, not always. Only since I started flying. :-)

We've got a 1100' overcast with light rain right now and I keep thinking that I should take advantage of it to get some more actual IMC time. But I'm feeling lazy this morning.

Always a fun day flying and having the chance to catch up with friends. You could really feel the load when taking off and landing, not sure how to explain other than it was a feel thing.

Let Bear know one of your pilot friends went to Dinwiddie! Mary and I are looking forward to catching up with you Bear and your Bride some time, hopefully this summer.

Yes, I get lazy too. If there is not a 'real' mission I hate to pull the plane out hop up and down and push her back in. So, I guess I can call that lazy. Maybe I'll start doing what the IFR pilot did and make a very long cross country knocking out approaches. I guess needing a safety pilot is motivation enough to get out and visit friends too.

Man, that's a beautiful airplane. I'd have issues hopping in a sticky Skyhawk after enjoying the AC, too.

Glad you got to meet up with Jeff again. Great guy - we've enjoyed a beer or two together (when not flying) in the past ourselves.