With another successful BACFest in the books it's time to push farther west and explore South Dakota. One of our bucket list items is to see Mt. Rushmore and Crazy Horse, We'll finally get to cross this one off. 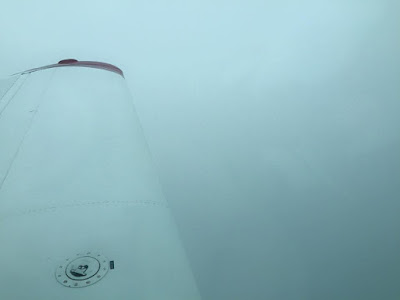 After an early morning review of the weather I decided we would be a go for KRAP. Mary and I packed up our room, for the second time this trip, and then headed for breakfast. We caught up with fellow BAC members to enjoy one last get together before heading out. We said our goodbyes and then headed back to our room for a final walk through.

Dubuque jet center tugged 08Romeo from her slumber in a hangar and positioned her on the ramp with the other club planes.  Brad M was preflighting his beautiful 83 Sundowner as I got started and loaded baggage. Mary joined me on the ramp after purchasing water and a coke for today's flights. 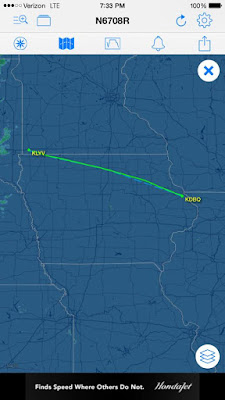 I picked up my clearance with Dubuque ground and taxied for departure on runway three-six. This morning's view of the Skew T showed the tops around 4000 and DBQ's elevation is 1076'. The reported ceiling was 800' so I figured on climbing through 2000' to break out on top.  The climb was steady with a left turn on course, we were on our way. 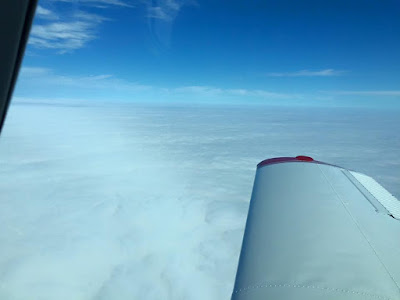 I checked in with Chicago Center followed by breaking out around 3300'. It was bright sunshine riding on top of a marshmallow cloud base, what a view. We did manage to eventually clear the layer and marvel at the vast flatlands passing below. The farm fields were endless, dotted with wind turbines and clusters of tress and farmhouses. 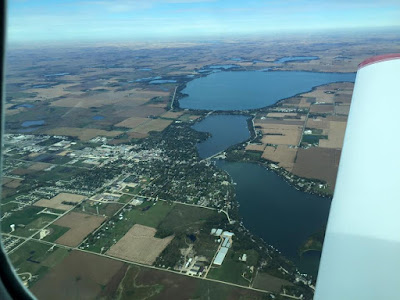 We had a beautiful view of Spirit lake and all the boat slips. We were reminded of our trip to Maine and the endless boats along its coastal inlets. After multiple handoffs we were finally turned loose once I reported having Quentin Aanenson Field (KLYV) in sight.
As I entered the left down wind for runway one-eight I again announced my position. No traffic here today so I continued in for a smooth landing on the freshly paved runway. I loved the fresh pavement and markings. Once shut down I could smell the fresh asphalt, memories of many paving days. 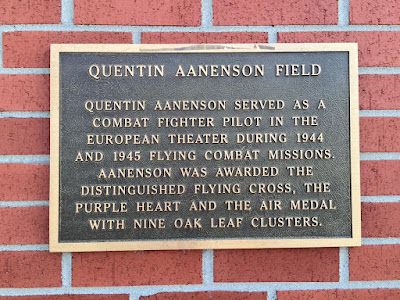 We took on twenty plus gallons to bring 08Romeo back to a total of fifty for the next leg. The terminal was small but clean and organized.  Mary and I had a good laugh when we noticed their four drawer file cabinets top drawer labeled in large letters 'top secret'. It was even funnier when we glanced down and noticed the bottom drawer labeled 'bottom secret'. Nothing beats a good sense of humor. 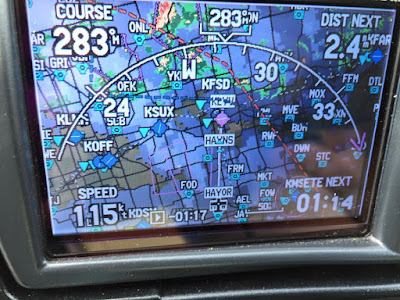 We made our pit stops and headed back out to the plane to get buckled in for the last hop. I called the 800 number for clearance and taxied out to complete my run up while on hold. 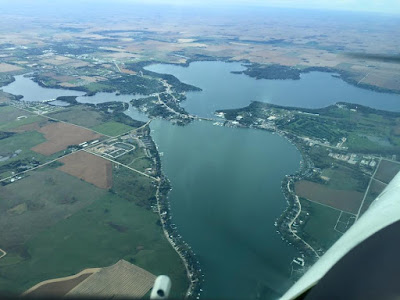 KLYV FSD MHE PIR KRAP
It started as a clear run, at least for a little while, then IMC for the next hour and forty five minutes. Watching XM weather on my Garmin 496 I could see the front stalled just beyond rapid city. The ride in IMC was smooth and for the most part very bright. A few times we punched through and found ourselves between layers, nothing like the beautiful views from Wednesday's flight. Looking ahead it was getting darker but no buildups that I could see. 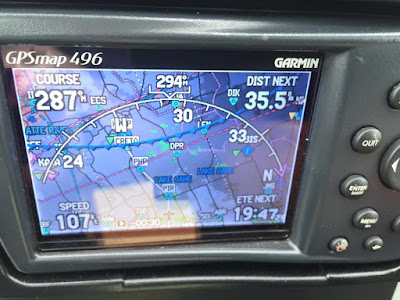 We passed through brief light showers twice as we continued along. Denver Center offered me direct at 8000 or I could continue on my course and altitude at six. I choose the devil I know at six because I was pretty much pointed direct on my current route.

I dialed in Ellsworth approach in anticipation of one last hand off. Once turned over to Ellsworth I rode along listening to two other aircraft inbound for KRAP. The approach would be the ILS RWY 32. I brought up the plate and overlayed it on the ForeFight map, making mental notes of the regional getting vectors. It would be two turns then cleared for the approach, report established.  It was a good rehearsal in my head as I flowed through my typical checks. WIRE - weather, instruments, radios and elevation (altitudes). 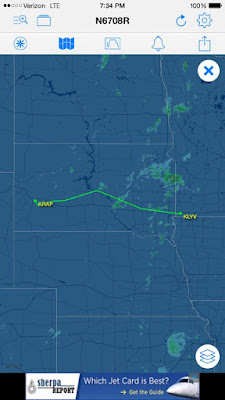 I was next to try my hand at the ILS. There was a regional inbound behind me so I tried to keep my speed up. I pretty much got the same two vectors, 250* for what seemed like forever followed by 300* maintain 5300 until established, contact tower. Ok my turn to shine, I kept the needles in the bubble while trying to spot the airport. I could see flashes of ground below me, and it was hilly and close. I broke out and was high on the approach so I pulled power and got the needle back in the bubble.  I added approach flaps and continued down, the tower asked the jet for a 360* for spacing. He could push buttons, I was hand flying in this crap, I didn't  feel that bad. I made a nice landing, extending so I could make a quick turn off, it worked out perfect.
As I taxed towards T1 I leaned as usual, this time 08R shut down. I hit the pump and mixture but no luck. Tower, 08Romeo engine shutdown on the Taxiway, will advise.  Keep calm, throttle half, pump on, mixture full rich...a few blades and a pump of the throttle has the fan turning once again. Karma for not caring that my speed forced the regional to have to circle. 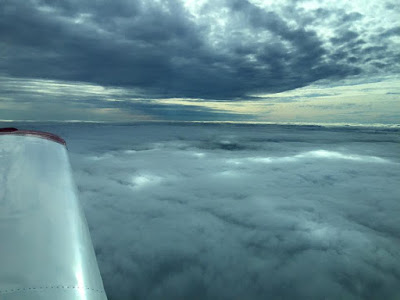 I continue on with my taxi to the ramp. The tower had given me taxi instructions to west jet off of taxiway T1, but it didn't look right.  T1 was correct but I needed to make another immediate right on T1 that I missed. Maybe I was paying to much attention to the ongoing construction. I made a u-turn and it was a short taxi to the correct ramp, (rolls eyes), I'm a dip stick.

West jet linemen were right out to the plane to help. Our rental car was ready and they got my fuel order and request for a hangar squared away quickly.

Mary and I headed to the hotel to get checked in, then we drove out to try and see Mt. Rushmore lit up at night. As we drove through the steep hills we seemed to have entered IMC once again.  Honestly, I've had enough for one day.  There was no way we would  be able to view but we got a bearing on the location, attractions and ETE. 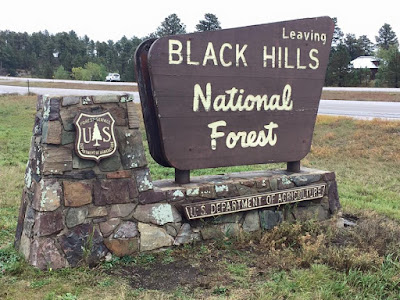 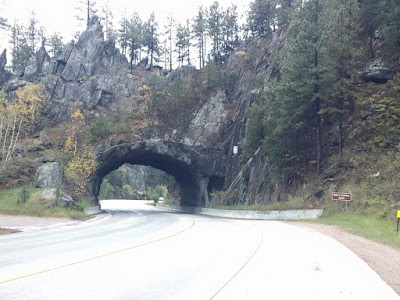 We got an early start this morning enjoying our complimentary breakfast provide by our hotel. We packed some refreshments and snacks since the plan was to hit the highway and visit the monuments. First up Mt. Rushmore. With all the "IMC" conditions last night we didn't realize how close the Presidents are to the highway.  It was an awesome first sight! I'll let the pictures do the talking. 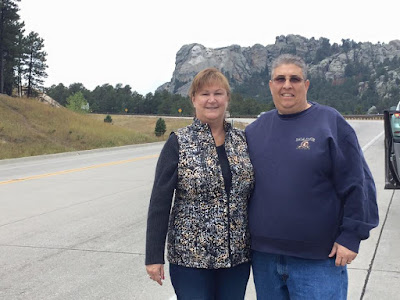 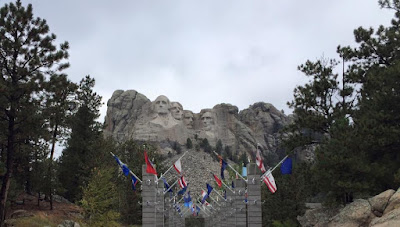 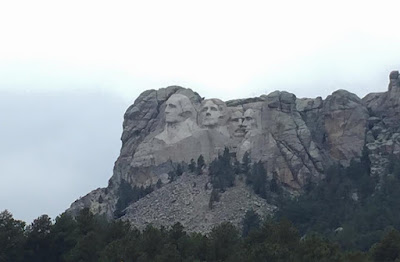 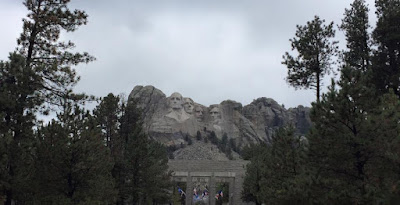 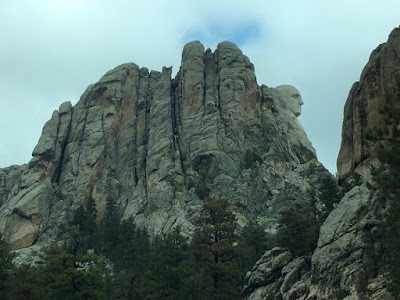 ﻿
﻿
Next up was the short ride to Crazy Horse. The Crazy Horse monument towers over the Rushmore monument in comparison. This was evident upon comparing some numbers. George Washington's face is 60' tall, Crazy Horse is 87.5'. The horses head, when completed, will be 219 feet tall. This is taller than the statue of Liberty from base to torch. Enjoy some the pictures from the exhibit. 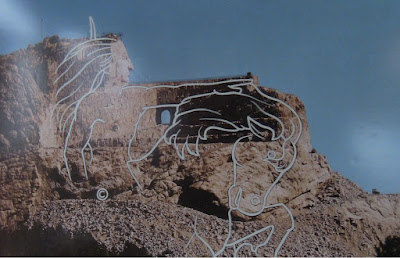 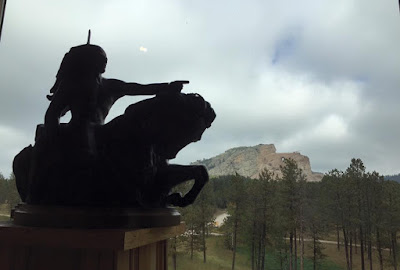 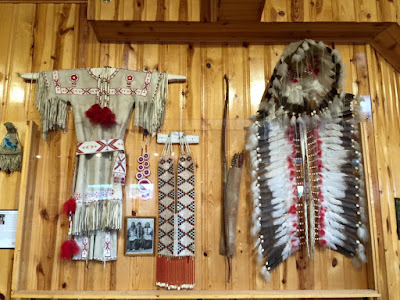 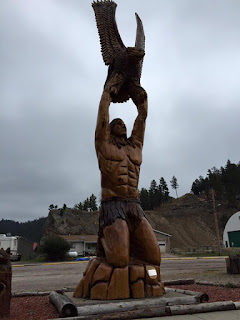 We drove through Hill city, round the mountain, then back through Keystone. Playing the part of tourists we were both taking pictures at every opportunity. It was time to head back to Rapid City so we could view the bronze statues of the presidents and then snoop in the shops adjacent to main street. We decided to have dinner at the Firehouse Brewing Company, following a glowing recommendation from one of the folks in a local shop. 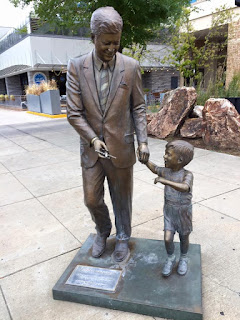 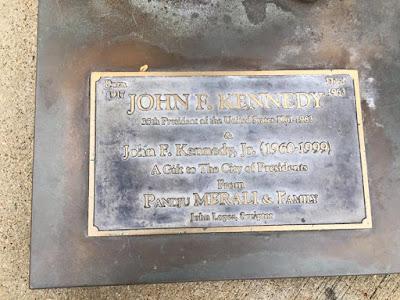 I had brisket with a side of mac and cheese, Mary had a half rack of ribs with fries.  We both thought the food was excellent along with very good service.

We made our way back to our hotel with desserts to go.  Mary had cheese cake that got a fair rating and I had bread pudding that was very good. 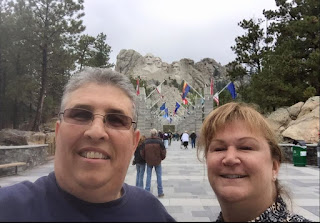 I barely finished typing this up as my eyes were getting heavy. I still have a weather check to do before turning in. The third leg of our adventure begins tomorrow as we fly to Kansas City.
Posted by Gary at 11:30 PM

Eh, we've probably all made a taxiway identification at one point or another. Want to talk dip stick? I once turned directly off the ramp onto the wrong one! D'oh.

Looks like a very nice trip. I only visited Mt. Rushmore once when I was a kid - exactly 20 years ago, actually. Did you have a chance to get down to the Badlands at all? Another eerily beautiful spot in the region.

I'm going to have to write down that file cabinet idea for use at some point in the future, too. Good stuff.

Steve, flew over the badlands and only saw a few quick glimpses looking down through the layer below. Devils tower and little big horn next time out that way. We want to do Yellowstone at some point.