The weather was great today so I had to scratch the flying itch. I just wanted to get the oil pumping and provide a sneak peek at my new Mountain High Easy Breathe Boom Cannula. The system is not complete, yet, but should be good to go in a week or so. I am waiting on additional parts for Mary's upgrade to her oxygen set up and then I'll review in flight with another video. I'll be able to show the pulse Ox numbers to go with the upgrade. Here is Part I of the upgrade: Oxygen Delivery System Upgrade.
Posted by Gary at 9:19 PM No comments: 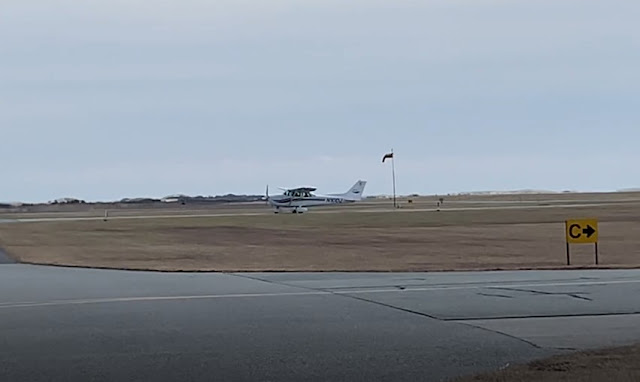 I decided to head over to the hangar and update my Garmin 480 Data card.  It's an easy swap and test and it's better to get it done and be ready to fly then to forget the card on a day I plan to fly.  I also relocated and changed the mounting system for my Sentry ADSB/CO2 detector. While I was there I changed a few of my video cameras setup, and battery brick location. I hope to be adding one new camera to the collection, a Drift Ghost 4x. 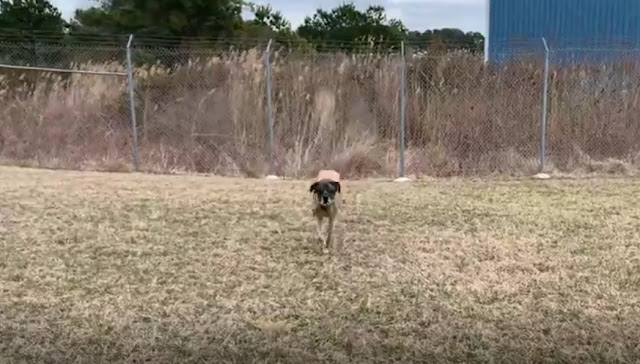 Once I was done with the plane there was the mandatory Ziva play time. I also managed as much plane watching as one could get in a short time since I was heading out to pick up lunch for me and my bride.
Posted by Gary at 3:45 PM No comments: 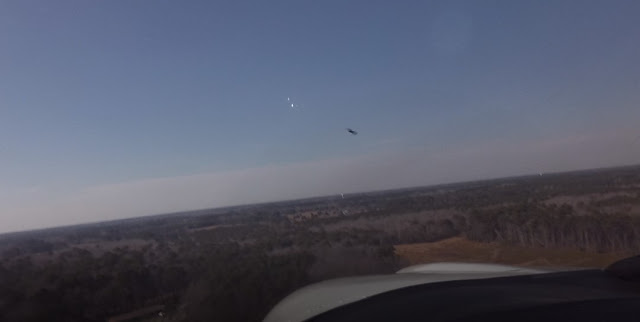 It's another beautiful day here at the beach! Our temp in Ocean City is 63 degrees at 11am with winds 260/12G17. I am returning to Wilmington (KILG)to pick up my bride and then return home.
Our Ziva girl has been confused, every noise triggers a run to the front windows to look for Mom. I did keep her and the boys busy while I did a few things around the house. I am planning on heading over to the airport around 1:15 in order to preflight, sump, and mount cameras. I reset the Drift Ghost X and it seems to be working just fine now, we shall see.
I launched from runway three-two and soon after tucking the gear away I went head on with a big bird. I held course and the feathered suicidal traffic banked as if out of control then shot past my right wing tip. Too close for comfort. 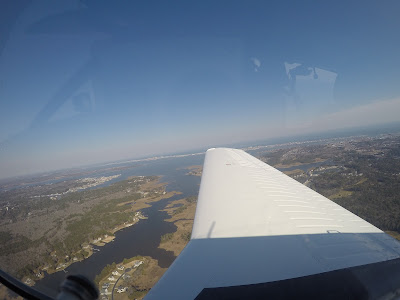 The remainder of the trip was uneventful, that’s a good thing. The winds were gusty at Wilmington but just off the centerline of runway two-seven. I made an ok landing, dropped the nose a little to quick and used some brakes in order to taxi off on taxiway Bravo. With a quick call to ground I was directed to FlyAdvanced.
Mary came through the gate ten minutes after I shut down. Little did I know she had her family in tow. Everyone wanted to see the plane. It was fun to see the great nephews check things out and ask questions.
We said our goodbyes and climbed aboard, Mary was ready to get home. I contacted ground with my info and was directed to taxi to runway two-seven and hold.  There was jet traffic turning base so we sat tight and watched where he landed. Once cleared I brought up the power while holding the brakes, then launched. I was off well before where the jet touched down. 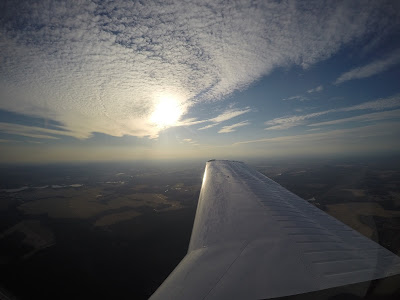 It was a quick hop home, just forty minutes. The ride was smooth and the view of the sky with the sun falling in the west was beautiful. The ride was fairly quiet, not much traffic on with Approach. 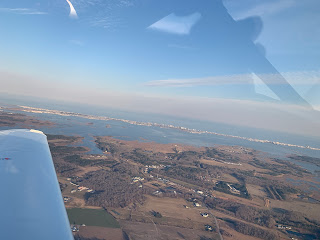 I switched over to Ocean City to make my position calls as I set up for one-four.  I made a really nice landing, rolling 3 Tango Charlie on the surface, no chirps, no skips and no bounce. Mission complete!
Posted by Gary at 3:30 PM No comments: Mary wants to head north to spend some time with her family. The plan is to meet up with her sister-in-law, spend time with the great nephews and then spend the night at my sister and brother-in-laws home.

The weather watch has begun for our Friday departure and return round trip on Sunday. Friday and Saturday look beautiful with temps in the mid fifties. Sunday has bounced back a forth with some predictions of flurries and freezing temps to partly sunny in the forties. Obviously Sunday is the concern, and being a weather guesser is the best gig out there.

Mary and I made the call to remove Sunday from the plan altogether. The updated plan still has me making the north run drop off arriving at KILG Friday at 11am. Once Mary is squared away with the rental car I will immediately head back to the beach. I’ll top off fuel once back in the hangar and be ready to launch for ILG on Saturday around 2:45pm.

Good morning! Mary is packed, my video cameras and iPad are charged and ready to go. 3 Tango Charlie has 40 gallons on board, good to go for the round trip. I'm taking a final look at the weather and we will be ready to head to the plane. 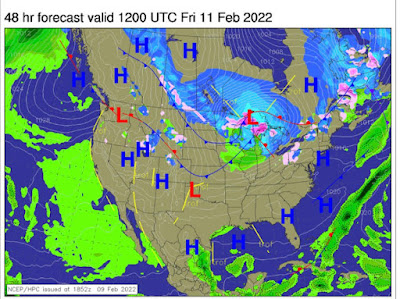 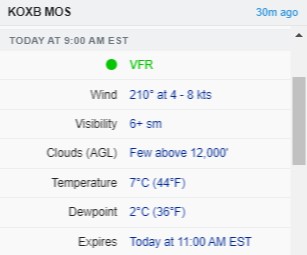 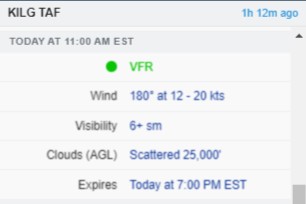 The weather is looking good with the only alert of note is turbulence starting at flight level 240 and above. We won't be going there for this flight, or any other for that matter. 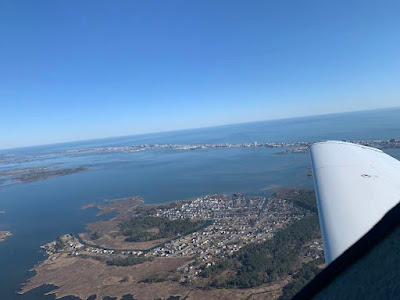 We departed runway one-four and climbed out in the pattern before pointing north. It was a smooth flight and the visibility was unlimited. Once in the air we could see the Salem NJ nuke facility and Atlantic city across the Delaware Bay. The Bay water was the cleanest I've seen in quite awhile.
Traffic was light but I decided to pick up flight following with Dover Approach. There were a few Del State planes in the area and two military aircraft. TITUS 31  is a King Air based out of Andrews and he was picking up his clearance back to the based as we approached Dover. Thanks Vince G for the heads up on the aircraft.
Dover handed me off to Philly and then since Philly took forever to step me down, I cancelled. I nosed 3 Tango Charlie over and headed for the left downwind runway one-nine, as directed by the tower. Winds were gusty but I made a nice landing and shut down at FlyAdvanced. I unloaded the bags and Mary signed for her SUV rental. I gave my bride a kiss, said see you tomorrow and saddled up for home.
As I taxied for runway one-nine full length I passed the Air Guard ramp and multiple C-130's. That was worth the flight right there. Once my run up was complete I launched for home. 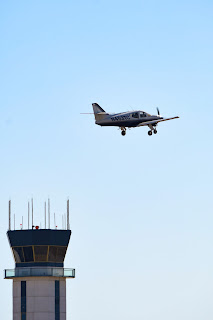 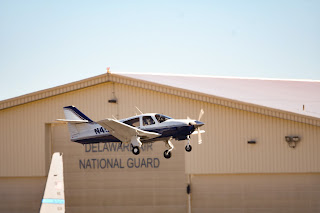 The ride was smooth, until I jinxed it by saying so, and from Dover south it was ride em' cowboy. 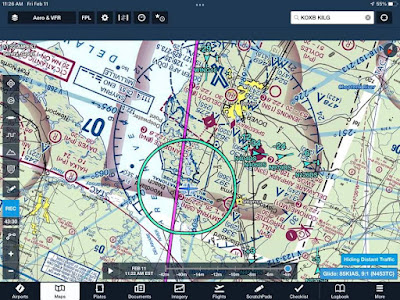 Once again the Del State planes were out, this time in full force. I bumped my way along until letting down for Ocean City, at that point the air was a bit smoother. Ocean Aviation had multiple planes in the air and after some good communication we all made our way to runway two-zero.
The plane is clean, and fueled for tomorrows flight north to once again do the shuttle flight. It feels good to be in the air and enjoying the sunshine, at least for now. We shall see how bad the weather gets for Sunday.
Posted by Gary at 4:24 PM No comments: 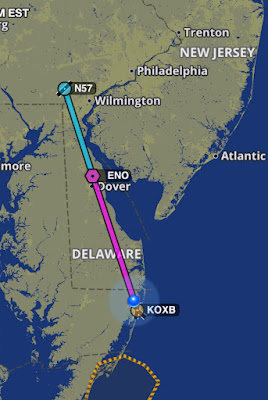 I swapped calls with Charles G from New Garden Airport (N57). Charles had flown down to Ocean City (KOXB) for business and the recent winter storm came in much faster then anticipated up north. Thankfully, Charles secured a hangar with our airport manager here at OXB and was safely tucked in for the snow event. 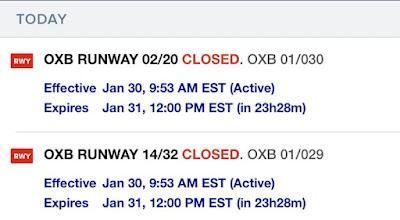 The plan was to hop a ride with Jon in his new Baron on Sunday (1/30), but, as previously noted the Ocean City Airport was still NOTAMed closed. Eventually runway 14-32 opened at noon on Monday and runway 2-20 soon followed. The only remaining issue was clearing out the drifts in front of my hangar.
Tuesday 2.1
Mary and I swung by the airport to check conditions, and for the most part my hangar door drift was gone. there was only a small row of snow blocking the door. I plan on taking the snow shovel with me to clear out a path for the mains and the nose gear so I can use my tug. 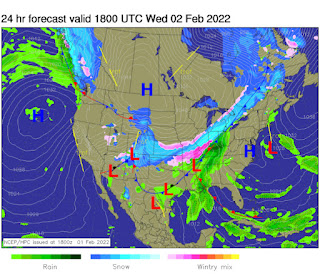 Wednesday 2.2
The weather is looking pretty crapy for the quick out and back. The plan was to depart OXB around 1pm and pick up Charles at 2pm. 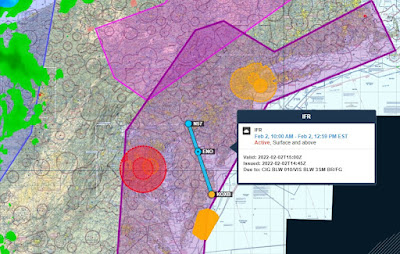 I don't feel like shooting the GPS 32 approach to minimums, IF, it stays at the three hundred foot ceiling. Minimums are two sixty. Even if I did get in Charles is not instrument rated so he can't get out or home. 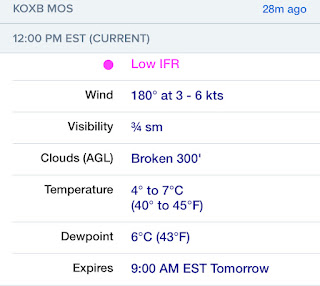 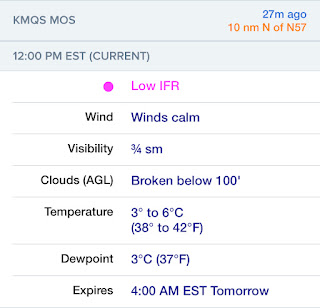 Charles and I confirmed our no-go decisions for todays mission. Depending on the presidents TFR we will reschedule for this weekend or early next week.
Tuesday 2.8 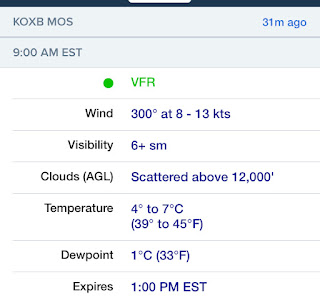 Monday morning I took on 16 gallons to bring 3 Tango Charlie to 50 gallons for the flight to and from N57. I also made a call to Charles that evening to make sure we were still on for todays flight.
My flight north is scrubbed, Charles is already in Ocean City having arrived last night. So, instead of a reposition the human flight, it will be a two plane lunch run to Delaware Coastal - KGED.
Flight plans change, we all make adjustments and new plans emerge. I'll be happy to get some fly time today and at least catch up for lunch.
Posted by Gary at 4:00 PM No comments: