After much debate it was decided to fly the 'spam can' (Delta) instead of taking 08Romeo to the Florida Keys.  As noted in my previous post the fuel cost was the deciding factor; approximately $1300 08R vs $699 plus tax (Delta). Ugghhh...we were off to the Philly airport. 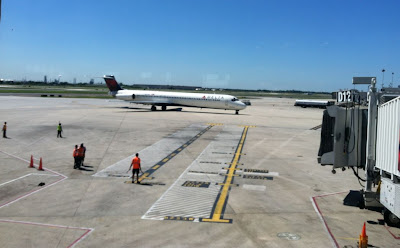 I dread the security checks that are a necessary part of flying commercial. Typically I get pulled out of line after the scanner screams and sent to the penalty box for the full body grope along with the wand over every inch of me.  This afternoon was a bit different, there was a full body scanner waiting for me. Shoes off, belt off, everything out of your pockets and proceed like cattle to the slaughter.  Stand on the footprints, raise your arms and with a sweep of the scanner your clear.  In my case some poor sap in the room just lost their eyesight after seeing this body along with all its metal parts.
We were on our way to the gate in record time, I could get used to this....just kidding. It's been a while since I last flew and I think the last adventure was on South West.  SW provided very good service but I will say our experience on Delta was excellent.  We were settled in for the first leg to Atlanta, Mary trying to nap and me with my face stuck looking out the window. 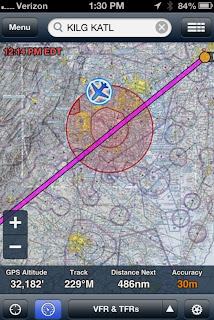 The Atlanta experience was interesting, walk off the plane in one terminal find the escalator and take the 'plane train' to another terminal, like riding the subway. Next we boarded a regional jet for the islands, much smaller, cramped seats but doable. I have more shoulder and leg room in our Sundowner. Another short hop of an hour and a half and we are on final for KEYW. I forgot how short the runway is here until the reverse thrusters kicked in and I almost did a face plant on the seat in front of me. 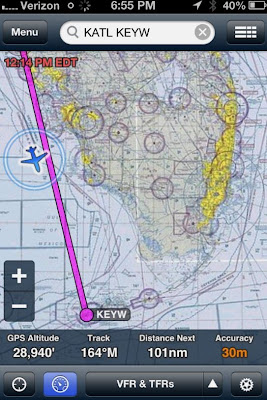 I should mention that we were staying at the Sheraton Suites as recommended by Geoff on his blog, Family Flying. It was great advice, the room was perfect and service outstanding. 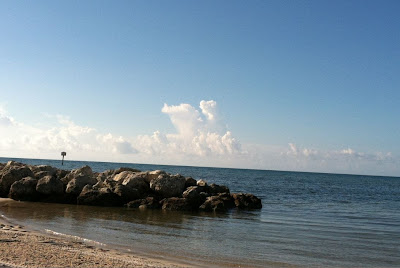 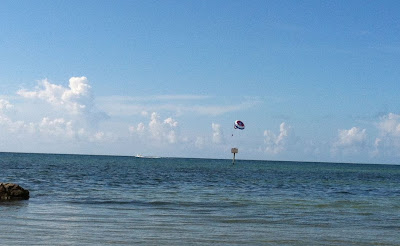 Today we decided to cross the street and enjoy Smathers Beach. Beach chairs were $10 each and the umbrella cost another ten, thirty bucks later we were finally settled in. The funny guy at the beach said if you leave early it will be an additional ten, with a perfect poker face. Funny guy, lets have the receipt. 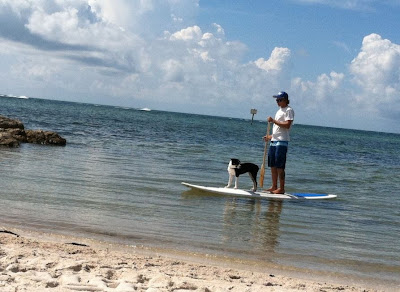 The sun was really hot, much hotter than Ocean City MD, it felt good. The water was cool, clear and flat, no waves to speak of. We baked for hours enjoying the quiet and having some fun with one of the locals working with his dog renting paddle boards and kayaks. 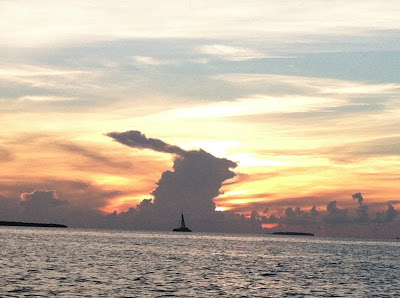 Looking back most of the week is a blur. We visited Duvall street a number of times making stops at Coyote Ugly, Sloppy Joe's, a few jewelry shops and who knows how many other places. We did tour the Hemingway House and the Key West Aquarium during the week as we made many stops along Whitehead Street for museums and art collections. 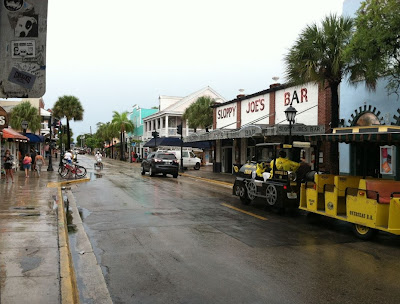 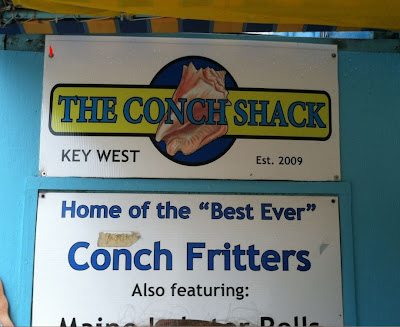 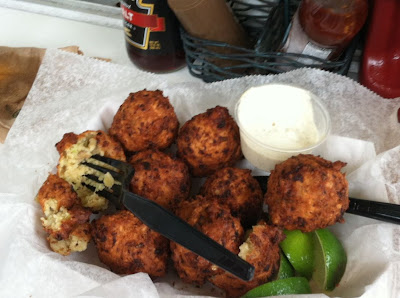 We also took a Dolphin Tour, it was excellent. Dolphin Safari did a great job finding the dolphins and we were  treated to a mom and her calf that played around our boat as we sat with engines off drifting along. After that special treat we headed off to one of the islands and spent time learning how to snorkel and use fins. It was fun cruising along seeing all the sponges, tropical fish and baby lobsters. 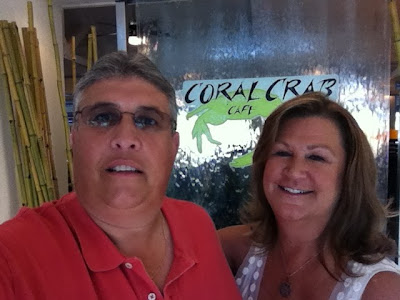 Mary and I celebrated her Birthday with a romantic dinner at Latitudes on Tank Island. Dinner is pricey but the food and service were amazing. Mary had the Butter Poached Florida Lobster Tail on creamy saffron polenta, asparagus, champagne beurre blanc, topped with caviar. I was in heaven with the Butter Poached Florida Lobster Tail on creamy garlic potatoes, asparagus and an 8oz Tenderloin filet cooked to perfection that melted in your mouth.  We both split a Key Lime pie that was the perfect ending to our evening. 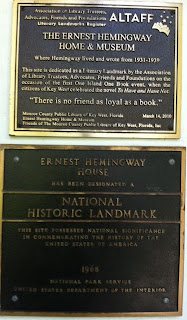 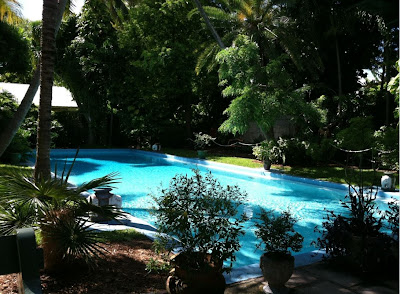 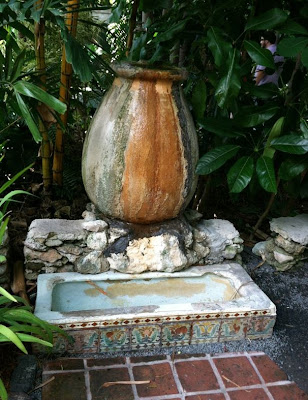 Hemingway converted a urinal obtained after a renovation at Sloppy Joe's bar into a water fountain in the yard, where it remains a prominent feature at the home, filled with water from the large Cuban jar, and serving as one of many water sources for the grounds' cats 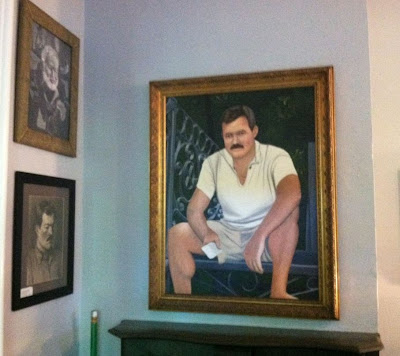 Today was departure day. We had a 12:15 flight out of Key West and a connection in Atlanta back to Philly. The morning started out great with a light breakfast and an early shuttle ride to the airport. I was hoping the security checks would be easy and they were, another body scanner. As we waited for our Delta 737 to arrive at the gate we were entertained by a drunken idiot that made his rounds laughing like a fool and bothering the gate attendants.  This guy was a few sheets in the wind and we all were hoping he would not be on our plane. All I could think off was diverting to another airport and missing our connection. 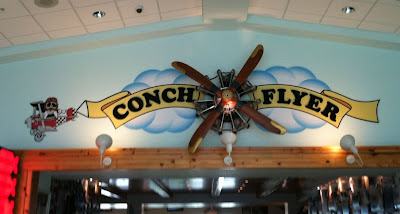 It was finally time to board and Mary asked the gate person if we were going to have the 'happy' drunk on board, she said no. I was waiting to see this play out. The flight was full and we were pretty far back with a few empty seats around us, you wonder how that is. Well two groups that were in the terminal waited forever to board, thanks for making us late! Everyone was watching to see if the drunk boarded but he didn't, he was stopped on the ramp and pointed back to the terminal by the Sheriff....yay, one for the good guys.
We arrived into Atlanta and finally made our way off the plane with twenty three minutes until our connection left the gate. I was updating on flight aware and that's a bit behind the actual time. Mary and I all but ran through the airport, thankfully we have no carry on luggage. I had plotted the route and we found the escalators to the plane trains and got to the platform as a train pulled in. It was packed and as the trading of the positions was completed we were underway. We needed the A terminal, the last stop before baggage claim on our route. The gate was switched to A19 from A11 and now I thought we had more terminal to cover. Off the train and up the escalator we come to A terminal, right would be gates 18 through something left turn would be 19 through 1, lets roll. Through the eatery area and to our gate when we here "at this time all zones boarding all zones at this time". We got in line and made the flight just in time.
﻿
We enjoyed a nice flight home and picked out a few airports and landmarks along the way. I was disappointed that Foreflight didn't work at our altitude on my iPhone, instead I had to look at the VFR maps and match up the view between the clouds. I did manage to pick out Punta Gorda airport, MacDill AFB in Tampa and Mary picked out Ocean City Maryland with no map. Its good to be home and back with our zoo. Ziva grew a few inches and pounds, I swear, and the cats....well they are cats and if they have food, water and Mom's lap to lay on they are happy little kitties.

Things I've taken from our Key West vacation....I've learned to love flip flops and I have a serious addiction to Conch fritters.
Posted by Gary at 8:15 AM

Very nice write up. Key West has been on my "list" for awhile. I'm glad you weren't disappointed.

We stayed on the quiet end of town. I could not imagine this old fart staying on Duvall Street. It was much better to taxi or shuttle in and out of town (a few miles). Plenty of good music, eats and drinks!

Looks like an awesome trip! Sometimes, as much as I'm sure it pains any pilot, commercial just does make more sense. And hey, at least it means you can have a couple more beers if you want to, right?

I still refuse those damn scanners, though... it's, "I'd like to opt out" every time from me! Fortunately, I've started getting the magical TSA Pre✓ symbol on my boarding passes - which means breezing through security. Woohoo!

Conch fritters.........yummmmmm! Glad you had a great time and all worked well.

Now start planning that Bahamas trip! The conch fritters at Tippy's on Eleuthera are about the size of your fist and taste awesome! Still working on the new stupid fees though; we'll see.

It does make it a bit more relaxing not having to watch wx and yes, that orange crush or extra cold one makes life grand.

The regular scanner makes my life crazy with all my metal patrs. If they want to look at this body or my junk they can have at it, its their eyes. :)

The Bahamas trip is moving up the list. Actually we are looking for some place to go for Thanksgiving.

I need to dig out all the previous info I read and start to review the process.