Rob (Rob's Flying Adventures) posted on the AOPA and POA forum about a dinner flight to Kutztown Airport. The FBO there recently closed and had a huge sale. This is not a good sign for the folks flying out of this facility. The airport hosts gliders, parachute training and flight lessons. At the end of the runway there is the Airport Diner, great place and good food.

The plan was for Mary and I to meet up with the few pilots that planned on attending. I rushed home to take care of the beast (Maggie) and pick up a change of clothes and shoes for the Bride. I scooted back to ILG and preflight 679er, waiting on fuel to top of my tanks. I was ready to fire up the minute Mary came through the gate. Well, at 5:15 the Bride called and said she was stuck at work, go on without her. If I hadn't finished the preflight I might have cancelled but I was at the starting blocks waiting to turn the key. I decided to go.

I was cleared to taxi to and hold short of runway 1-19. There was a flight of two Air National Guard C-

130's setting up for a low pass. They broke the low pass off early turning out to the east, I was now cleared to back taxi on runway one. I made my turn around at the three thousand foot marker, added a notch of flaps and launched into the cool evening sky. The flight was about 30 minutes and 50 miles, good for cross country time. I punched in N31 on the GPS for a direct flight and also set up the nav 2 for the East Texas (ETX) VOR on the

234* radial. This would be my indicator when I arrived, or so I thought.

Yes, I almost missed the airport. I think this was a carryover from my first PPL XC. I missed the same airport as my checkpoint. I had the East Texas VOR dialed in (234* radial, can't remember) as the needle moved to center I knew I was there just didn’t see it, the airport. Off my left side just behind the wing, I have a visual. I started to

circle to enter the downwind for 35 and Bob came on and said you missed us or it or something. I started to laugh and (I know I won't live that one down) entered the pattern.

Nice airport and a great little diner. Let's hope it all stays there. They had a very good turnout for the airport meeting, that's a good sign. As always the time with friends when flying is too 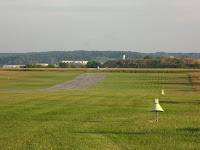 short. It was great to catch up with Rob, Bob and meet Eric.

We all saddled up for home and I followed Rob and Bob out to runway 17. We were both off and heading south. The high wingers turned southeast and I stayed on my 180* heading. Did I mention how dark it got? Whew, it was dark out there. Great ride home as I picked out the airport beacons for MQS and OQN. I made my call to ILG tower and was instructed straight in runway one nine, report 4 mile final. 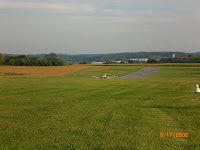 No problem, I pass by the Rollins building and have Wilmington off to my left. The twin bridges are in view but no runway in that big black hole where the airport should be. I could not even see the airport beacon. At five out I call and ask for lights since I have no runway (or airport) in sight. The tower lights the place up, it looked great and I was aligned as I should be now on short final. I ask them to bring the light back down

and made a nice landing needing to add power to make it to the first right turn on to Kilo. When I did taxi clear of one nine I then asked the tower if anyone else has complained about not seeing the beacon. He said yes and another pilot based at ILG said if I didn't ask for the lights to be brought up he would have flown over the airport too. At least it wasn't just me.

Thanks Rob for the great photos!

As a side note to my flight I wanted to add that I passed two hot air balloons. The flight of two passed between me and the Pottstown nuclear plant cooling towers. I was maybe 15 miles west at the time heading north and the balloons were heading south. The lead balloon was maybe 2000-2500 feet and the second about 1500 feet. They were beautiful as they floated south. I mention this because earlier this month a former club member that flew 679er was lost in a balloon accident. This man was a very good pilot and instructor. Blue Skies Earl, gone but not forgotten.
Posted by Gary at 12:29 PM