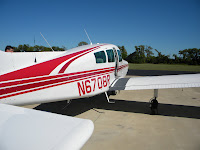 Last nights lesson plan was fun stuff! Tom wanted to make a short cross country flight in the system in order to see all the phases of my training come together. This flight will also be a good indicator of my "ready for check ride status". I flowed through my typical pre-flight planning. Wx checks through out the day, fuel for the plane, charts, approach plates, NOTAM and TFR checks. This was going to be my first time into Atlantic City so I made sure I printed out the airport diagram and necessary plates for the flight. Work seemed like it took forever! I couldn't wait to get in the air tonight. I bolted from work and made a stop for my scheduled haircut then headed straight to the house. Mary and I had a quick dinner of leftovers, Ossobuco and Risotto.
I headed to the airport early so I could lubricate the door hinge pins and latch systems. The spray lube seemed to take care of the sticking latch and now made for an easy swing and movement for the top of the door locking pin and side latch assembly that really looks like a normal door latch in our homes. I cleaned up any over spray and stored the tools. I moved to setting up the office for my flight. Charts folded, approach plates tucked in plastic protectors, NOTAM info updated on the plates I needed for this evening and the garmin 496 powering up for wx. 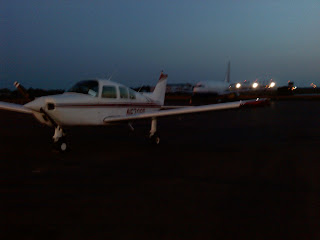 On the MidAtlantic Ramp surrounded by the big boys

I filed my flight plan with fltplan.com but did not receive a confirmation text message with the ATC confirmed route. I was pretty much ready to go as Tom walked to the plane. We pulled the remaining sun shields and got the fan turning. I had already switched on the battery and avionics long enough to chug and plug my route into the Garmin 530 so once running I just had to recall it. Wilmington does not have a clearance delivery so you pick up your clearance with ground. I flowed through this pretty easy and used the CRAFT mnemonic to note the essential elements of an IFR clearance. The clearance in long hand.

I was soon climbing out of Wilmington headed for KACY and having a blast. Once handed to departure I changed frequency and advised my current altitude and altitude I was climbing to. I was quickly handed off again to another sector for philly approach. This controller had no Idea who I was and directed me to squawk VFR. I don't think to so Tim....I advised I was on a IFR flight plan and gave him my squawk code, I was given a standby. The controller came back and gave me my filed altitude and direct Cedar Lake (VCN). I was handed off to Atlantic City approach and given a vector for a straight in runway 13. I advised I wanted to shoot the ILS RWY 13 and with that control vectored me in a box pattern to allow some bigger traffic to land. With the heavy traffic clear I was given a final turn to intercept and cleared for the approach. I was very steady tonight, on glide slope and localizer solid, it felt great. I broke out of the simulated clouds at 500 feet (flipped up the foggles) and made a nice landing. I have really poor pictures tonight, I was walking across the ramp and shooting with the cell phne. The FlightAware Flight Track for the first leg. 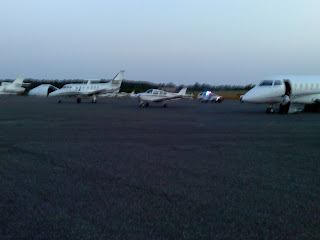 Making my own space among the big boys

It was a quick stop at MidAtlantic Jet Aviation for a cold drink of water, wx check and to make sure my flight plan was on file. Tom tried to file but his was kicked back stating that there was already a flight plan filed for that route time and tail number. Heck, at least we knew mine went through. We walked across the ramp to the "little guy" as referenced by the young lady working the desk. Once I walked around and checked fuel we saddled up for home. AC has a clearance delivery so I made the call and copied the info. We were ready to taxi and I was anxious to get in the air.

Once again our climb out was runway heading, radar vectors to Cedar Lake, as filed. I made a nice smooth climb and was directed to right turn direct Cedar Lake. I clicked on "Direct to" made three turns of the GPS outter dial to FPL , a turn or two of the inner GPS dial and selected VCN followed by enter and I was on my way. The Garmin 530 is a joy to fly with! I was given direct Woodstown (OOD) and requested the GPS RWY 27 approach into Wilmington. Philly Approach was great this evening and kept things flowing. I was cleared for the GPS 27 and on my way. I did a nice job shooting the approach and ended the evening on a flat kerplunk back into ILG. Grrrr....not the ending I was looking for but we're homeand 08Romeo will fly again. FlightAware Flight track for the leg home.

Next up some ground review and a flight or two for some additioanl partial panel. Tom would also like to see me be a bit more aggressive correcting for course. I hope to get up this weekend or monday night.

Have a date set for the checkride yet? Sure sounds like you're ready!