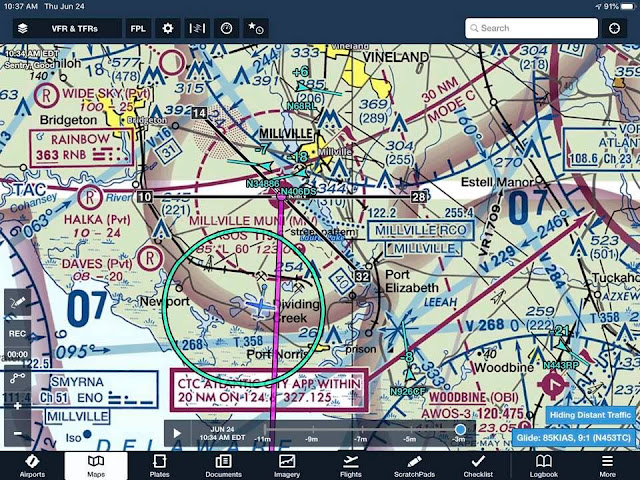 I was scheduled for my flight review last Thursday but my knee was giving me some trouble.  The best choice was to reschedule and let my knee calm down. Everything worked out and I wore an Ace neoprene brace for the added support and to make sure I had no issues.

I headed to the plane around 9:30am, only needing to tug 3 Tango Charlie out since I did my pre-flight and fuel sump yesterday afternoon. A quick walk around confirmed all looked good to go and with that positioned the pane on the ramp and locked up the hangar.  It was a beautiful day even though it was a bit windy.

The runway of choice was runway two and I took my time to taxi out letting the oil come up to temp. As I turned towards the wind for my run up I heard the jump plane heading my way. Timing was good as I completed just as he pulled up. One Cessna landed and I positioned and held. Once the Cessna was clear I launched for Millville, KMIV.

Today I was going to try oxygen. Why Oxygen just crossing the bay? Well I noticed when I climb around seven thousand my right leg, with all its metal parts, will really ache once on the ground and done for the day. Some have said lack of O2 or pressurization.  I can eliminate one of those issues and use the Oxygen system I had previously purchased. 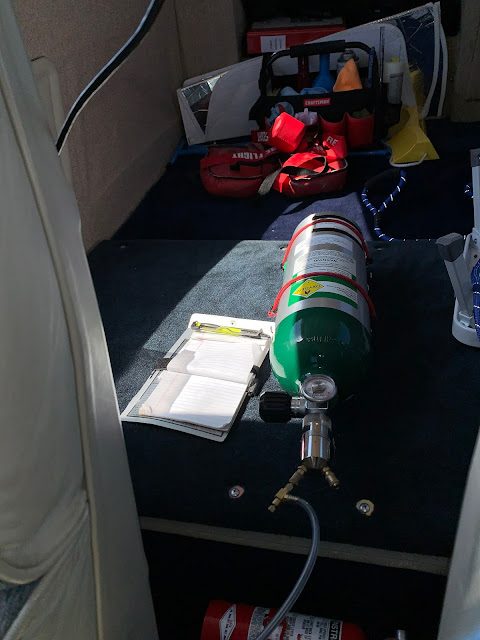 I gave the system a try yesterday and it didn't seem to hard to get hooked up. As I climbed for the Bay crossing I hooked up the O2 and gave it a try. It didn't go as smooth as it did on the ground yesterday, but I worked through it and let the autopilot and vertical speed climb keep me pointed on course and climbing to my target altitude. 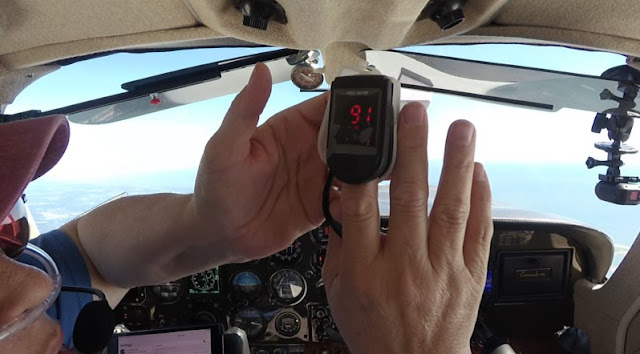 I did a test with the pulse Ox and it was reading 91, with the bottle hooked up and nose cannula in place I was reading a steady 96. I had the bottle set for ten thousand the lowest setting. I should note I also wore a compression sock on my right leg.

I let down for Millville and made a nice landing on runway ten, the first leg is complete. I taxied to Big Sky and shut down then headed inside to catch up with my CFII Tim.

Tim and I discussed the plan then headed out to the plane. Following my taxi out and run up we launched. Let the fun begin.  Instructions were on departure fly heading three zero zero and two thousand five hundred. I made my calls and followed on course, to altitude, locked in. We reviewed V speeds and then I set up for slow flight. Power reduced and two notches of flaps added for my left and right 360’s. Tim advised that despite all the wiz bang tools he likes a clearing turn, noted, I obliged.

I flew in slow flight and actually chased my altitude, it wasn’t pretty.  I did multiple turns and straight and level until it was respectable and we were both satisfied with my performance. 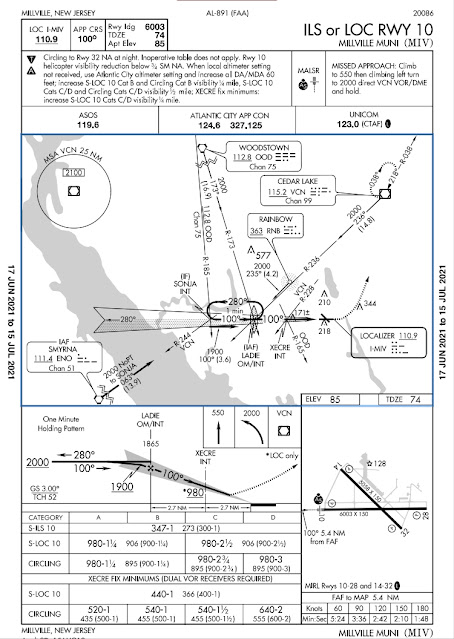 Next up an ILS approach by hand. Despite setting up for vectors the change was to fly direct LADIE. I briefed the plate and since this was ‘vectors’ I advised no procedure turn and instead turned left on the final approach course at altitude. I needed to be on altitude and turn to course since I was now inbound at the FAF. I had added a notch of flaps and dropped the gear as I approached LADIE. Once crossing I started to let down for the DH of 347. At two miles out I started my missed to clear the airport environment. Tim wanted to go at five hundred. I regrouped, recovered, and back on glideslope. Going missed I asked where to and he said what if I was going to fly the published missed. I hit the suspend button and the flight path came alive. I’m now wondering if I briefed the miss out loud. With that we headed out for additional much needed air work.

On my return to the airport we had talked about using the last notch of flaps and that it makes going around exciting. I was right on the money landing and added that last notch of flaps.  Perfect serve, Tim wanted a go around. Cram, climb, clean, and cool was my call and I flowed along. As I started the climb I immediately took out that last notch of flaps, then gear, and then the last two notches as I confirmed a good positive rate. I had the cowl flaps open for landing so cool was taken care of.

One more lap in the pattern, a nice landing and then taxi back to Big Sky.  We sat and chatted a bit more then switched to former employer airport updates. I enjoyed my flight time and catching up with Tim. I need to keep up on the slow flight and air work a bit more often. 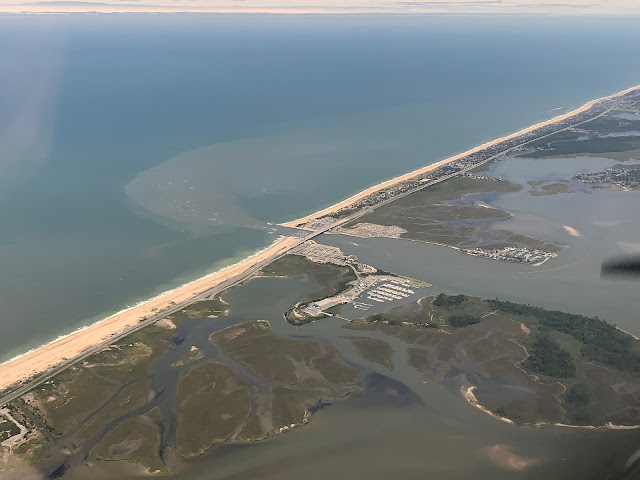 I launched for home and enjoyed the flight at 6.5 back across the Delaware Bay. I flew along the coast, eventually entering a left base for runway one-four. My flight review is in the log and I’m good to go for two more years. Next up my medical in September.
Posted by Gary at 10:30 PM