Flight for a Wedding 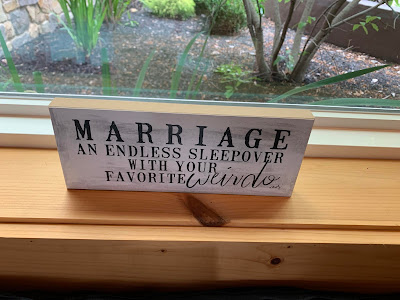 Mary and I were invited to our niece Katie's wedding in Chester Springs, PA.  What a great chance to use General Aviation to make the trip an easy hop north and follow up with a return flight home.  Travel by car, three hours one way. Travel by our magic carpet, fifty minutes north (headwinds) and about 40 minutes south (tailwinds).
The plan was to depart Saturday Morning around 8am and arrive at Brandywine Airport by 9am. We had reserved a rental car (SUV) so we would be good to go for ground transportation. Our Ziva girl was dropped off Friday afternoon for boarding and our bags were packed. All that remained was a last check of the weather early morning.
Saturday
Rise and shine and lets get this show on the road.  Whoa...pump the brakes. Mary woke up with swollen eyes and all sinus areas from forehead to cheeks. Thankfully she had no issues breathing and not really in pain. My bride decided it would be best if she did not go and sent me off on my own. Knowing she was safe and no asthma issues I agreed to go alone, I really didn't want to miss Katie and Mike’s Wedding day and the chance to see my sister and her husband. The last time I saw my sister Denise was pre-covid. 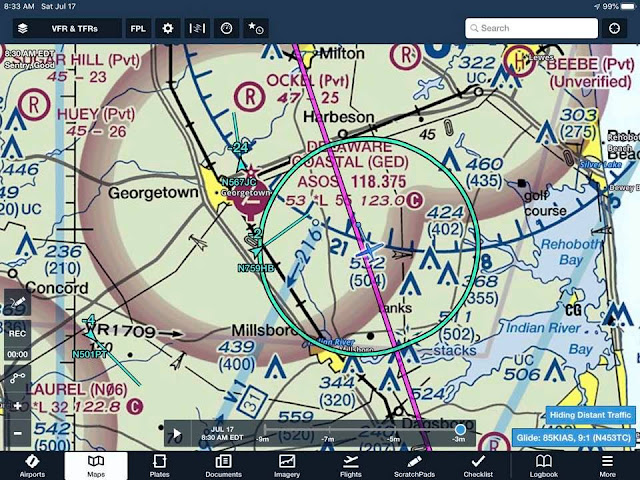 I had my pre-flight completed and only needed to sump fuel before starting up. Once I climbed aboard I mounted a single video camera and headed out for runway two-zero. With one small bag, a garment bag, and fifty gallons of fuel I was light. I had filed but since it was so nice I decided on flight following only for the trip north.  I contacted Dover and we swapped info providing those extra eyes we pilots like to have watching over us. Dover handed me off to Philly and they handed me off to another sector before I finally cancelled and let down for KOQN, Brandywine. 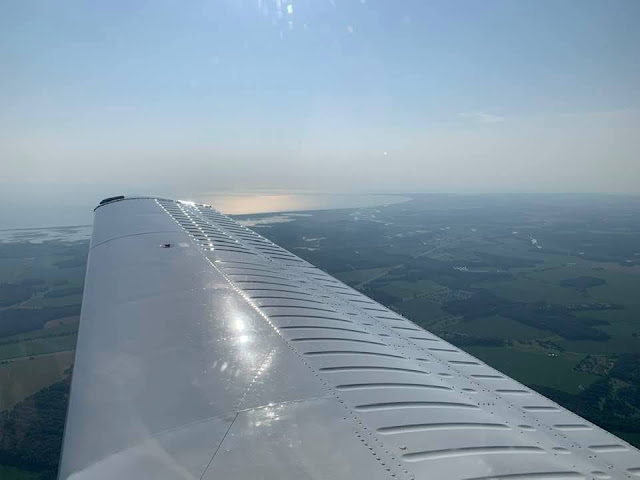 I set up for a long final for runway nine and after making a nice landing taxied clear at the Terminal. I secured the plane and rolled my bags to the rental, a Nissan Rouge. From the airport to the hotel was about fifteen minutes. I was so confused looking at the new buildings along RT 100. This was my old stomping grounds when I was working the farm. I knew every short cut and every back road, now, I could not recognize one landmark. I may as well have been dropped off on another planet.
I did find my way to the Hilton Garden Inn and managed to secure my room access by 11am. My brother and his bride arrived before noon and we met up to go scout the area. Read that as find Katie and Mikes house so we had an idea where to go for the reception BBQ later in the afternoon. We motored north on RT 100 and I finally saw something that I could recognize, Ludwig's Corner Horse Show and Fairground. I was amazed how the landscape of my youth and tooling around either on horseback or in my 73 Monte Carlo have vanished from all but those precious memories. Getting old and watching the world change around you really stinks sometimes.
I will say that Mike and Katie live right next door to God's country, barely two lanes of blacktop with shoulders, uh, wait, there were no shoulders just huge, I mean humongous trees, and a few telephone poles.  This is four wheel drive country come winter.
We made our way back out to RT 100 and I found our way to the hotel. We would give this another go at 3pm for the real deal.  I was showered and dressed for the BBQ complete with my aviation themed Hawaiian shirt. I followed our initial route, or so I thought, missing one of the last two turns. The hunt was on. I was driving, my brother was right seat and his bride was in the back seat with an occasional laugh. She finally volunteered to bail us boys out when we sat at a T intersection, three way stop, trying to decided if rock paper scissors or a flip of the coin would best direct us to our destination. Thank you Janice for the bail out. Yes, I had my phone for GPS. No, I don't need directions, or so I thought.
The decision was made to depart before dark just in case the boys got lost again. It gets really dark on those back roads and the thought of passing even a pick up truck took maneuvering and some luck. We ended the night at the hotel bar to enjoy a nightcap. My Captain and Coke tasted great, and most likely will knock me out when I crawl into bed.
Sunday
I woke up at my typical Ziva feed me time, 5:30 Ugh...I rolled over for a few more winks. My tummy finally gave notice that I needed to find some eats and get something cold to drink. I showered, dressed  and headed downstairs for breakfast in the lobby area.  I strolled around and finally decided on a cheese omelet and crispy bacon. I passed on the juice and had a large cold water instead.
With my tummy full I needed to take care of a few things wedding related, a card and the cash. Mary and I had planned to do this when we arrived but since I am solo I now had to pick the card. That wasn't too bad and I make tracks back to the hotel. As I walked in my brother and his bride were just coming into the lobby, good timing. I sat while they had breakfast and then we decided to head out and find the wedding venue. I like scouting trips, it usually helps get the lay of the land. The wedding venue was easy and we were soon pointed south for the hotel. Janice wanted to make one side trip to find her Uncle's house but we weren't positive of the address, however, we had the correct road. We did eventually find the place with a little help from Janice's cousin Pat, and with that took some pictures and then headed back to the hotel.
I went back to my room and took a nap mixed in with watching some History channel show on cars that built America. We had all agreed to meet in the lobby at 2:15 for the ride to the wedding. We piled in the rental SUV since that was way more comfortable then my brothers rental car. Once we arrived and found a parking spot we were directed to an outdoor area for the country wedding ceremony. Here are a few pictures. 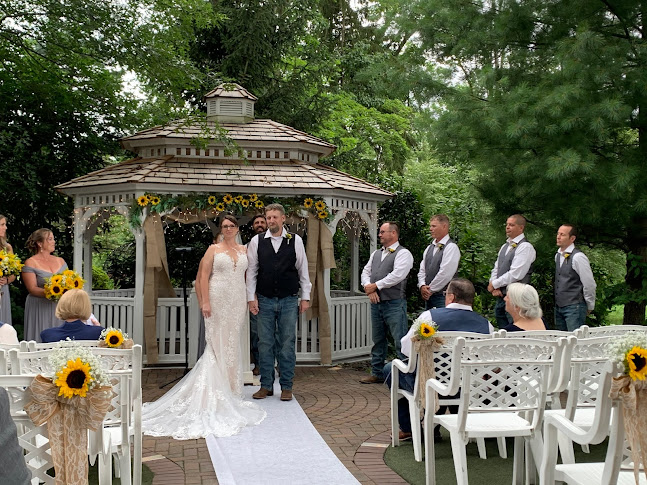 The music and food were excellent. Everyone seemed to really have a good time. I am so happy for Katie, Mike, Brooke and my sister and her husband Dave.  Y'all know how to throw a great party.
Time flew by and I was ready to head back to the hotel. Joe and Janice were ready too, and we all said our goodbyes before walking out to the SUV. I was so happy to see my sister, it's been way too long. I am also happy to see Katie and Mike tie the knot, they are fun to watch and listen to as they interact. Mary and I wish them a lifetime of love and happiness.
Monday
I was up again on Ziva time, I wonder if she was up at the boarding place or if she was sleeping in. I know my bride was sleeping in, no dog and no me to make noise around the house.  I did text Mary all through the wedding with pictures and updates, it was the least I could do to make her feel like she was there.
I was up, showered, and dressed in time to check out at 6:40am. I loaded up the SUV and headed south to Brandywine, a fourteen minute trip. I took an old familiar road to cut across RT 202 and on to the back way to access the airport. Boot road looked nothing like I remember. There were houses everywhere replacing all the farms that I frequented. I even went through a double set of tunnels that I knew so well and I honestly was shocked, gone were the fields, barns, and horses that used to dot the land on either side. Time waits for no-one.
The Terminal was still locked when I arrived, it was just 7am. I loaded the plane and did my pre-flight making sure to sump fuel despite not taking any on. It had rained pretty good on Saturday and I wanted to make sure there was no water. Both tanks were good. I had called the airport office on Saturday and asked if they could check to see if the top latch for the pilot door was indeed latched in the closed position. Most times I leave it in the open position because the plane is hangared or I am not away from the aircraft. The man checked the latch and without putting any pressure on the top of the door he must have forced the latch and broke it. I somehow managed to squeeze it together with enough force to switch to the open position and gain access. 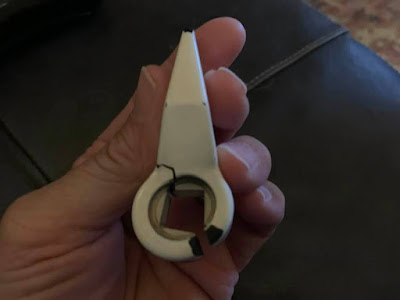 The man that works the desk rolled up and asked if I needed a hand with anything and I advised I just needed to check out. I mentioned the broken latch and said I should have been notified. Either way I asked for it to latched and they did me a favor, all good, I'll take care of the broken handle. My tie down fee was paid when I arrived so I was good to go. I headed back to the plane and climbed aboard. 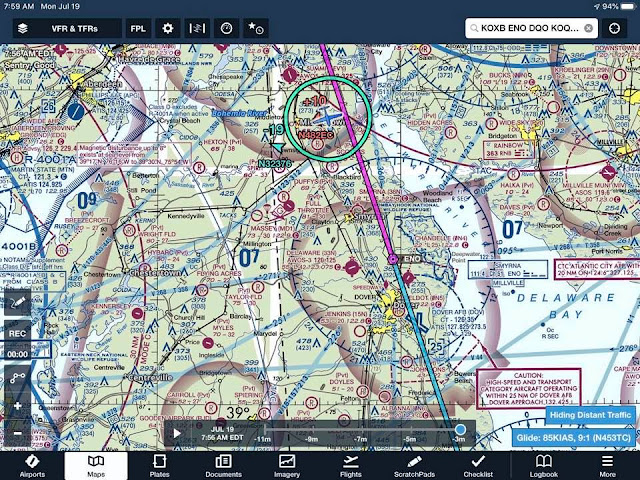 3 Tango Charlie came to life and I sat to let the oil temps come up. Once at the top of the yellow I taxied out for my run up. I held short at runway two-seven finishing up my checklist items then got a call, from a fuel truck, if I was taking off or waiting on a release. I responded just getting ready to launch and with that made my call. 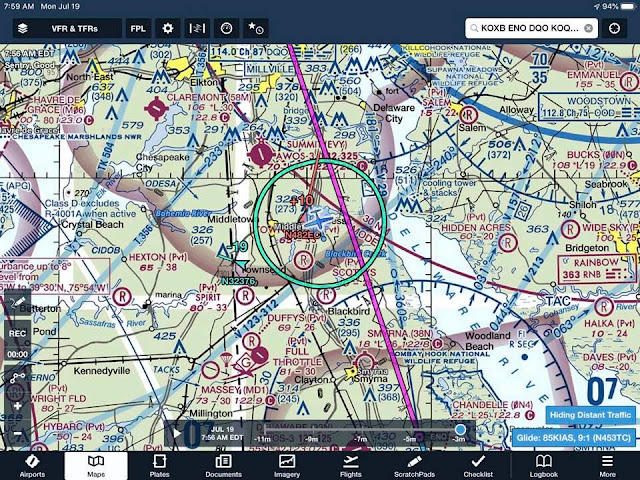 It was a smooth ride south although very hazy until reaching Ocean City.  I did have some traffic to contend with but no issues. I made my call ten and five miles out for landing full stop runway three-two and continued in. I made a nice landing but had floated a bit and landed way longer then my typical greaser.  I called clear and headed for the hangar. 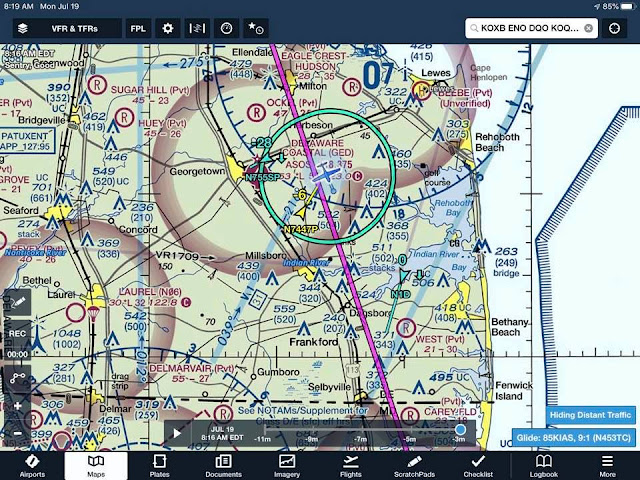 A fun trip although really missing my bride. Happy to be home and I can't wait to see Mary. I'm not sure what's up next, maybe Bar Harbor maybe the Boston area.
Posted by Gary at 12:00 PM