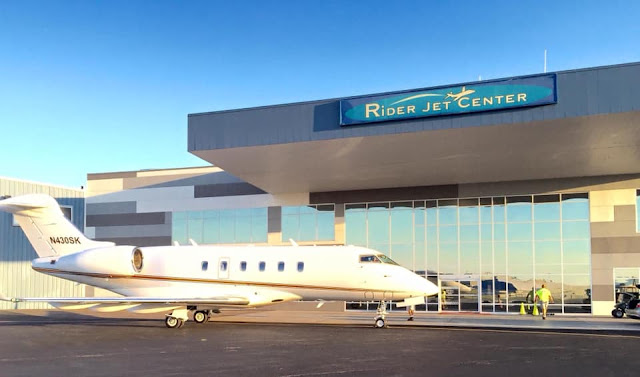 The plan to meet up was worked out on Friday with a few text messages shared with fellow BAC member Les G.  We would take the ladies out to brunch at the Runways Restaurant and lounge located inside the Rider Jet Center at Hagerstown airport KHGR.
Mary and I were off to the airport for our scheduled 10:15 departure. I only had to sump to complete my pre-flight and then tug 3 Tango Charlie out of the nest.  We climbed aboard and taxied out to runway three-two where I completed my run up and launched.  I had filed Friday night and decided I would launch and pick up my clearance with Patuxent once in the air. 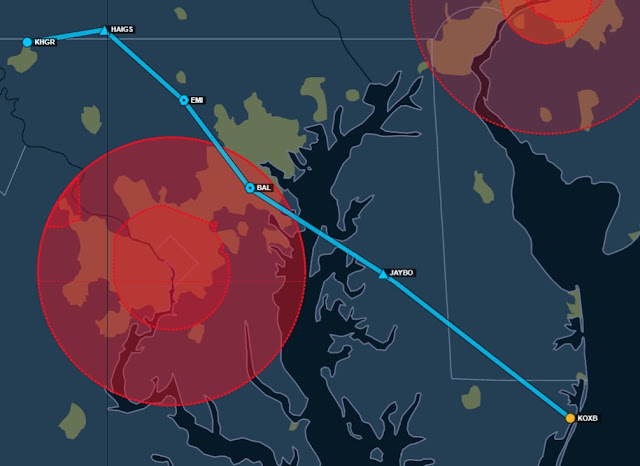 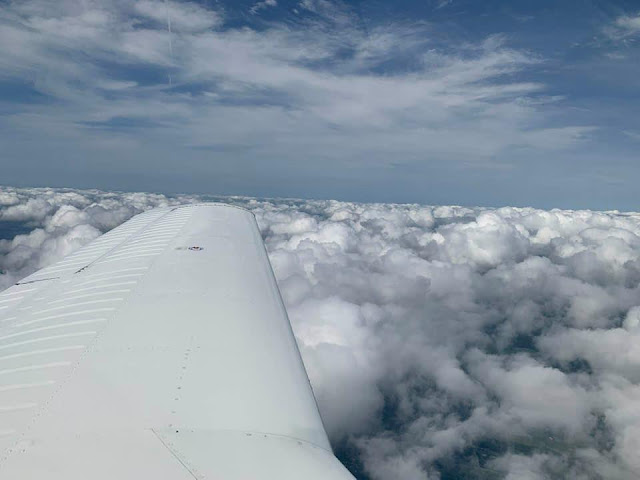 The quiet and fun ride ended as I crossed the midway point between Salisbury (KSBY) and Easton (KESN) at the north tip of R-4006. I had picked up traffic opposite direction about three hundred feet below. 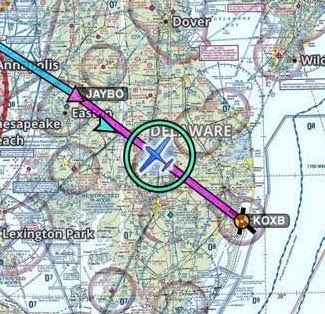 There was no word from Approach, so I alert them to the traffic and then ATC turns me from my present course of 310ish to 270°. I advise the traffic is turning to me and I am given a new heading of 260°. Once again the traffic turns to me and ATC turns me to 230°. I get one more turn to 210° and finally a climb to seven thousand, all be it very brief. Once there is no conflict I am immediately dropped back to six thousand and resume course.
The one day I do not video and I have something I want to review and learn from. Here is my take-away after watching the FlightAware video and thinking back to what transpired.  With traffic only 300 feet below and coming head on I should have asked for higher immediately. Instead, I advised ATC of the traffic and they vectored me, multiple times before finally giving me higher. The really odd part of this situation is that the traffic kept turning towards me, each time I turned. I gave away control of my situation to ATC. My learning moment, never give up that control as PIC. It was a real brain fart on my part, and I honestly can't remember doing that in the past. 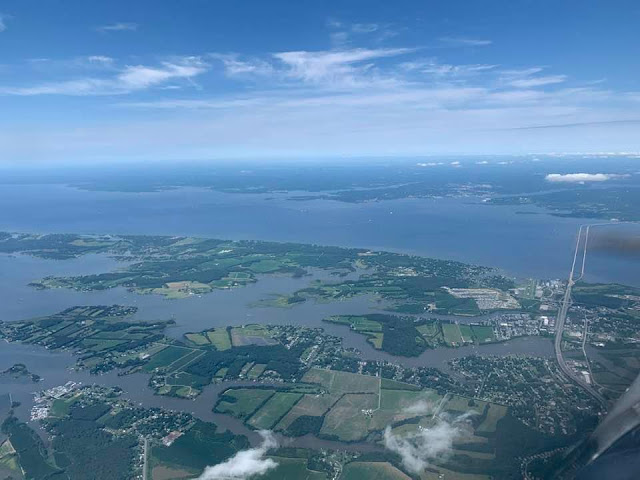 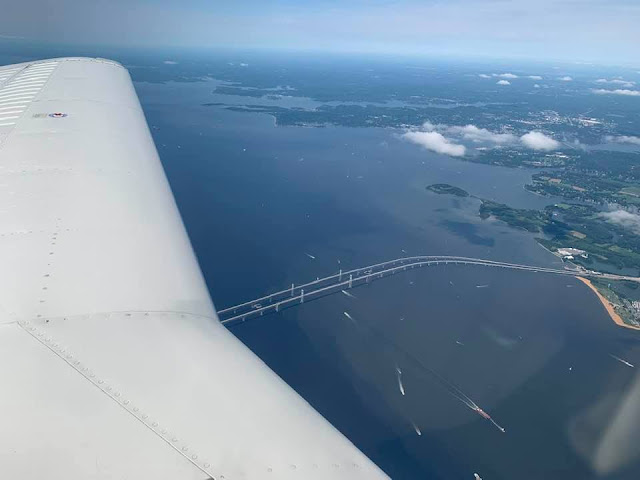 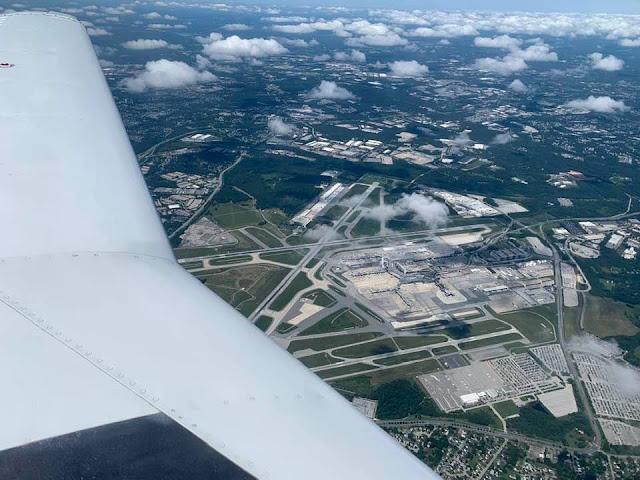 The remainder of the flight across the Chesapeake Bay was quiet and enjoyable. I had a few more handoffs and a shortened route with a direct EMI then changed to direct HAIGS. When I was given direct HAIGS I set up for the ILS 27 approach just in case. As ATC stepped me down from six thousand I went into IMC and the ride was still very good. Once I reported that I had the weather at Hagerstown ATC asked me to report established on the localizer. I thought this was odd since the airport was VFR conditions and I was not given an expect ILS 27. Once turned inbound for the airport at HAIGS I broke out and reported that I was now VFR conditions instead of established on the localizer. ATC handed me off to the tower and I continued in for a smooth landing.
Les arrived in his Sundowner shortly after I had landed. The lineman had just finished fueling 3 Tango Charlie with just ten gallons. The ramp was busy so Mary and I headed inside to settle up my fuel bill grab a table. The ladies had a chance to catch up and the pilots of course talked airplanes. We had last met up with Les and Nahia in Lancaster for lunch back in March.
While we were chatting a young man came up to the table and said he followed me on YouTube and Instagram. I was thrilled to meet Ryan and thanked him for watching and checking in. Ryan and his father (Dan) flew their light sport Aerotrek A240 from Martinsburg for lunch. I managed to get a shot of them with the plane and chat a bit about their light sport while we were waiting for our food order. Yes, Les and I left the ladies holding the fort. Hey, we had the chance to talk airplanes. 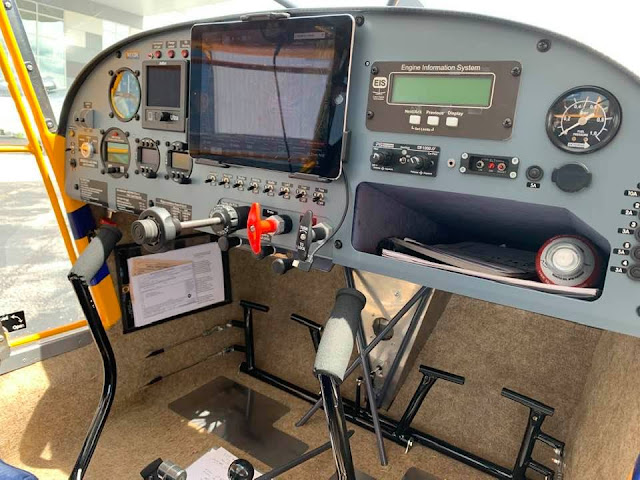 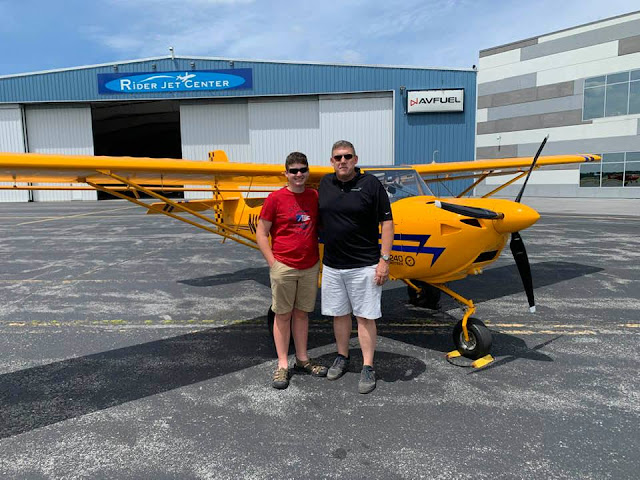 We headed back in to the restaurant while Dan and Ryan readied their plane to get back in the air. It was really nice meeting them both and checking out their plane.
After lunch and plenty of chit chat time we all decided it was time to head out. Les taxied out  and I followed once I picked up my clearance. I had filed when we were seated at the restaurant, almost a reverse of my flight here. KHGR EMI BAL JAYBO KOXB. The email confirmation showed a route change, KHGR SBY KOXB. I'll take it, it's a more direct route home that will save time and fuel. 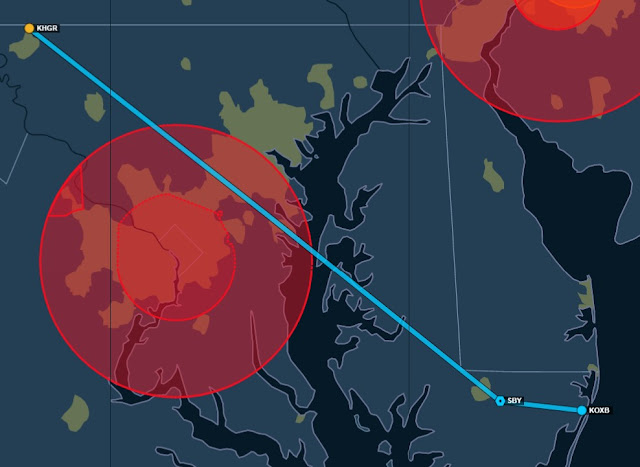 Not so fast, the clearance for home was amended and now read KHGR HGR EMI BAL JAYBO SBY KOXB. 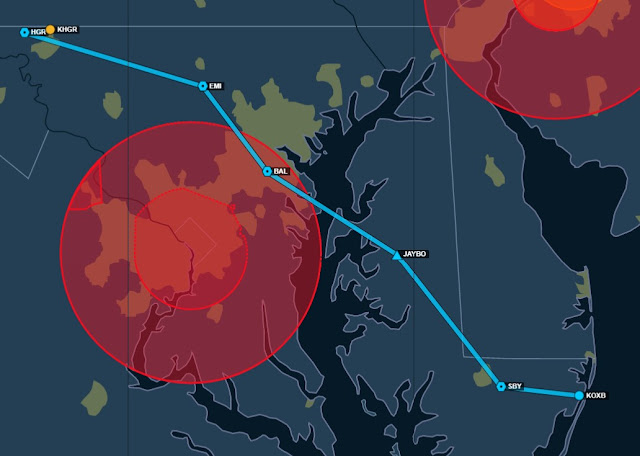 With the new route entered on the Garmin 480 I taxied out for runway two-seven. As I climbed out for the HGR VOR I was handed off to approach and we were on our way. I had one vector for traffic and then turned back on course. Eventually I was given direct Salisbury (SBY) and while Mary slept I motored along. As I let down for home Mary woke and apologized for sleeping the entire flight. I reassured her that was ok and that I took a cat nap too, yes, the look was priceless.  I was kidding of course.
Today we checked the pulse ox and I was at 88-89 once at six thousand and I'm sure a bit lower coming home at seven thousand. The experiment was to just try the compression sock only and no oxygen. The test run was a massive fail. When I climbed out of the plane I could hardly walk on my right leg. Mary helped me tremendously, opening up the hangar and bringing the tug out to the plane. I used the tug as a walker of sorts and managed to get 3 Tango Charlie safely in the hangar.  There would be no window or leading edges cleaned today, I needed to get home.
Mary loaded me up in the SUV and drove us to the house. I went straight to bed and took some horse pill size Ibuprofen for the pain. I went through the I'm freezing and the shakes to I'm melting and the sweats. I woke up this morning refreshed, no pain, and ready to do this blog. Lesson learned, I need Oxygen for anything above six thousand to do whatever it does to keep the blood flowing and accident traumatized leg from flaring up in pain.
Next up a possible flight to Pennsylvania for a wedding next weekend. Still watching weather and the forecast thunderstorms. Fingers crossed!
Posted by Gary at 7:30 AM

Part of the group I usually fly with was planning to visit Runways the same day you were there, but I was traveling and they ultimately scrubbed. How is it?

You and I must have been on the same wavelength. The very same day that you made that joke about napping to Mary, I did the same thing to my wife! The joke did not go over well with her, either.

I had an interesting traffic conflict the other day. Inbound for a towered airport (no radar) with the other traffic flying the same line as me, directly behind me, but with a 20 knot overtake. Not comfortable.

Runways is a nice place, good food and service. There were a few groups meeting up the day we were there.

I'm used to busy traffic flying here at the beach but when these 'issues' come up they are uncomfortable. See and avoid and the head on a swivel can only do so much. Just think back before ADSB, that's really scary.