I have been flying for 4 1/2 years with multiple trips south along the Delmarva peninsula on our many trips to the Carolina's, Williamsburg and other stops along the way. On each and every one of those flights as we pass by KMFV Accomack Airport, I mutter the same phrase, we really have to stop there and check it out. Well today was the day, no trip south other than the primary target of Melfa, VA and the airport. 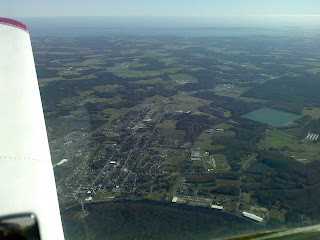 I headed to the airport early so I could install the taxi lamp retaining ring and test the system. Everything went very smooth and I only need to check it out at night to make the final comparison. Once the light work was completed I did my pre-flight and ordered fuel. Mike B is under the wx so he is a no-go for today's flight. I went through my list of co-workers, some were sick, some didn’t answer and others were doing the honey do thing. No problem, I took on 22 gallons and saddled up for Accomack. No flight plan in the system, it’s to darn nice to follow anyone but my own vision for today. I climbed out of Wilmington enjoying the new found rate of climb in 08Romeo. Right turn on course and I am pointing south. I monitor Dover approach and notice it’s busy with the “wings” group holly run to Tangier. I decided it would be best to have the extra set of eyes with me and call up for following. 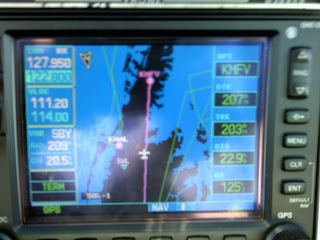 Visibility was the best I’ve seen in months! It was a clear view down the Delaware bay and an easy view down the Chesapeake. My flight plan on the iPad had me just west of Dover and Georgetown and my path took me directly over the Salisbury airport/vor before turning on course direct KMFV, Accomack. Pictured is the town of Pocomoke City, MD just north of the Maryland Virginia state line. You can see the Pocomoke River just beyond the thick tree line. 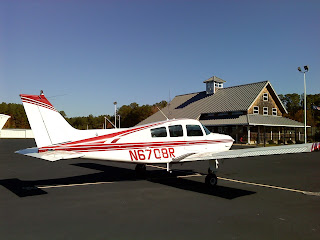 Accomack was just a short distance so I canceled flight following with Patuxent who seemed to have his hands full with the gaggle of planes heading to Cambridge, Crisfield and Tangier for the annual Holly run. I made my call about 15 north with my intentions for a full stop. As I entered the pattern from a 3 mile 45* I traded info with a Cessna turning base then final. I was number two and on the ground with a nice short field landing. 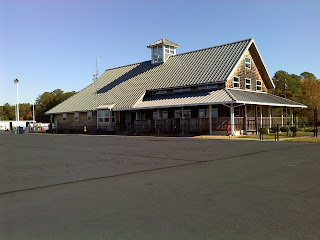 I secured 08Romeo and wandered into the terminal. This place is really nice looking and the ramp area had a good many aircraft tied down, planes that fly, no ramp trash here. Once inside I checked out the pilot lounge and flight planning room along with the bulletin board. There was a Stinson for sale that looked pretty clean and low time. I took a potty break then went to the soda machine for a bottle of water for my ride home. I chatted with the seasoned gent working the counter and got some info on the place. Enterprise will leave a rental if you call ahead. Two restaurants will come and pick you up if you call, their menus are on the main desk with the appropriate phone numbers. We chatted for a bit more about all the traffic today with the holly run and the perfect wx for flying. With that, I decided it was time for me to get moving. I said my goodbyes and thanked him for the chat as I eyed the rockers out on the long front porch overlooking the ramp…..Hmmmm what a nice day to sit a spell and enjoy the peace and quiet. 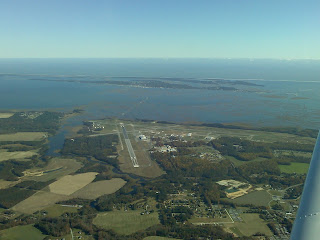 Well, as sweet as those rockers look I really should be moving along. I saddle up for the ride north planning a quick route on my vfr chart on the iPad. Love the point and drag feature with the immediate plan numbers updating. I decide to head north east towards Wallops Island then north to Ocean City Maryland. Wallops airspace is class Delta and I need to be at least 2500 feet. I pass above at 3500 and flip over to the tower and advise passing overhead SW to NE. I am advised to report clear of the area, I acknowledge. When I updated my position, now clear of the airspace, the tower controller asked me for my tail number again and model type then said have a fun flight. Odd, but yet he seemed friendly enough. 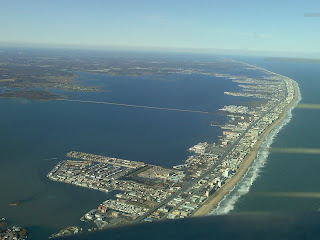 I had Ocean City MD in view and advised Unicom I was passing over the field and my altitude. I made a turn to follow the coast a bit then turned north for the leg home. What a great view, and no banner planes to deal with in the off season. 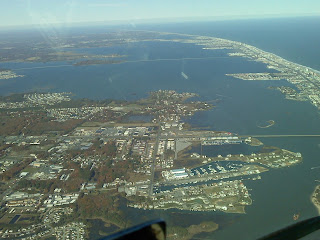 I turned for home and got a nice shot of the Assawoman bay off my right side. Once again I passed on flight following instead singing with the oldies and enjoying my view. Dover was busy and I did monitor on my way north. I passed east of the Dover AFB and crossed the north end of the Delaware bay. My flight path took me directly over the Salem nuke plant cooling tower and up the Delaware river. I made my call to the Wilmington tower and was directed to make a straight in for runway one. 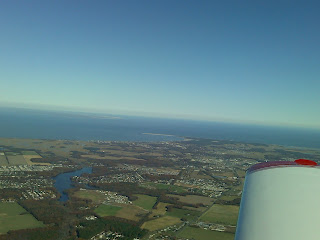 There was a Mooney inbound for a full stop but he was a mile or so behind and coming from the south east, the jersey side of the river. I took the time to plug in vectors for the ILS runway one approach since it’s back online now that the EMAS job is completed. The tower asked for best forward speed and cleared me to land. I powered back up and nosed over for a 120 knot run to the numbers. Good practice for the chance I may go to a busy airport with jet traffic and they ask me to do the same. Ok, running through the process….no flaps till crossing the fence, I can land long since I am going to far end of the airport to my ramp area, the tower approves landing long. I am crossing the EMAS as I pull the power, add a bit of a slip, hold it off, in the white arc and add a notch of flaps. Slowing down, holding it off adding the second notch clear of runway three two so I can touch down. The mooney was cleared for three two. I squeak it in and roll out retracting the flaps and adding brake pressure just enough to slow me down for the taxiway Kilo turn off. That was fun! 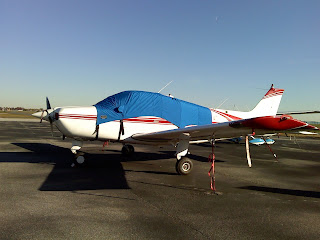 Great day flying, enjoying the view and the freedom flight provides.
Posted by Gary at 7:45 PM

Awesome Gary. These are the days I miss being part of 09L. Just knowing she is sitting someplace not flying :-( Looks like you had a great flight and found a new destination. Hope the taxi light is brighter for you. Be sure to adjust it's aim with a helper sometime.

Nothing like cruising along not having to talk to anyone at times, either. Just enjoying the scenery and being in the sky. Good times.