Mary and I headed to the airport around 8am with a stop at Dunkin Donuts for bagel's, coffee and hot tea. I guess the shoppers were still recovering from black Friday since the roads were wide open and we made good time getting to the plane.  I pulled through the gate and the plane was just inside the fence parked in front of the Red Eagle hangar, we tugged her up there so I could give the reiff heater system a try. The temps were hovering around thirty degrees overnight and I wanted to preheat and be ready to go without dragging the red dragon propane heater out to the ramp.  I unplugged the new 100 foot extension cord, uncovered and stowed the nose plugs and completed the fuel sump.
Mid Atlantic English Springer Spaniel Rescue 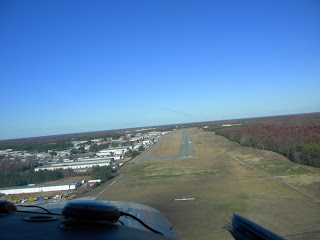 Once we were situated in the plane I turned on the battery switch to check the Cylinder head temps and oil temp prior to start up.  The Reiff system had the CHT's at 205 degrees and the oil temp was sitting in the yellow, we were ready to roll.  I called for my clearance after start up and plugged in the route for the Garmin 530 and 496.  I was cleared KOFP, Hanover county, the route was runway heading, radar vectors to Smyrna ENO,  V16, PXT, TAPPA, KOFP. Altitude 2000 expect 6000 in ten minutes, approach is 119.75 and squawk 1157.  I taxied out to runway two seven and called for my release.  We were ready to go with one change from the tower, direct Smyrna ENO and cleared to 3000. I was soon pointing down the runway calling airspeed alive gauges green, our adventure was about to begin. 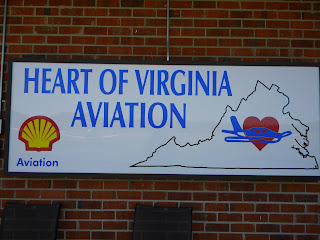 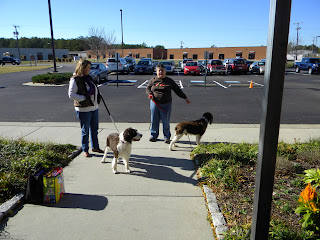 I was quickly handed off to Philly and cleared to 6000 then handed off to Dover.  Dover amended the clearance, direct CHOPS, which provided a short cut to our next way point. I checked in with each approach control as I was handed off, patuxent then potomac.  08Romeo was making good time as we crossed over each checkpoint. I received a reroute from Potomac to fly direct RIC (Richmond VOR) then to Hanover. Seemed like a back track but I figured when I got handed off I would get another change direct Hanover. 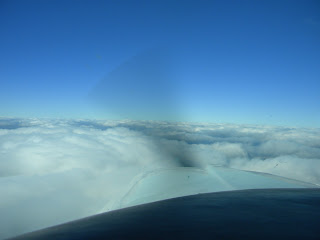 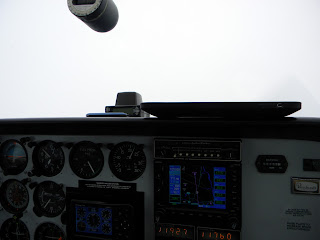 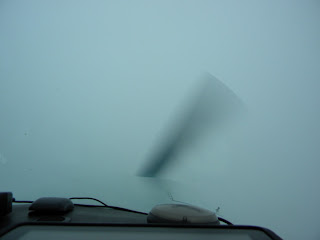 ﻿METAR KOFP 271554Z AUTO 29009G14KT 10SM CLR 09/M06 A2995
I descended to 2000 feet and canceled the Instrument flight plan with the field now in sight and wx noted.  There were two aircraft in the pattern but everyone played nice and we worked our way in, I was number three to land.  A very nice landing and short taxi to the Heart of Aviation FBO. I took on fuel to bring our load to 46 gallons which would get me to York and home to Wilmington.  Debbie pulled in and brought both dogs into the FBO.  Arleigh and Charleston were ready to go and enjoyed the fuss everyone made over them. I sumped the fuel while the ladies walked the dogs for a last potty stop then we loaded up.  Both dogs settled right in after some crying as they tried to figure why Debbie was leaving them with us. I locked the baggage door and then climbed aboard. 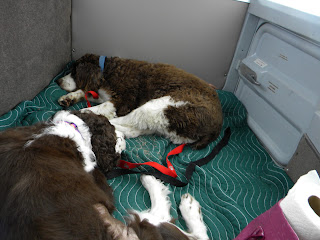 ﻿﻿﻿﻿
﻿﻿﻿﻿I had filed a flight plan for York, PA and tried to pick up clearance with the clearance/delivery frequency noted but had no luck. I called the 1-888 FAA CD number and got everything squared away.  The plan was to back track our flight path from our flight down but make a left turn to the north west and head direct Baltimore then York. After completing the run up we launched for leg 2 of the journey. Both dogs were sleeping and Mary was also in dreamland before we got to altitude. 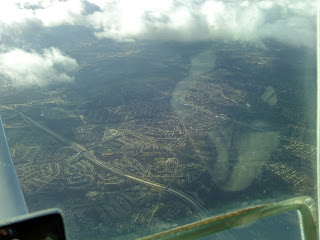 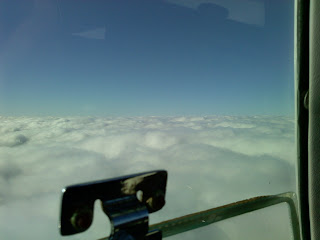 Leg 2 started off with good speeds but once turned NW the 45 knt head wind limited my ground speeds to 70-90 knots.  08Romeo chugged along at 7000 and skimmed the cloud tops. My route was amended to direct York once crossing GRACO, no fly over Baltimore's BWI.  Once clear of the BWI class Bravo I did request 4000, with the plan to descend through the layer and do a visual approach into York.  The plan worked fine and we went through the soup, very cool.  I was wondering how rusty I would be but it was easy peazy.  Pitot heat on, my descent had started.  I found myself calling out on course wings level descending 500 ft/min.  The verbal scan helped me focus and we soon popped out beneath the overcast layer. I had some concerns about ice since the temps were cold enough and there were reports of aircraft going through the same layer or traveling in it and picking up ice.
KTHV 271653Z AUTO 28015G22KT 10SM BKN047 OVC055 03/M06 A2986
﻿
﻿
﻿I reported York in sight and had the current wx. The winds were really gusty as I made my way to runway three five.  I added approach flaps and the second notch as I was in the flair.  I worked the throttle and listened to the moan of the stall horn as I planted one main then the next for a smooth landing.  Mary was impressed...heck, so was I.  I taxied in and secured the plane so we could let our furry passengers take a break and stretch their legs. Mary and I, along with Arleigh and Charleston, sat in the terminal as we awaited Tim and Linda's arrival, Arleighs new family. Tim and Linda walked in and they hit it off with Arleigh.  Both new parents participate in Golden Retriever rescue so they knew the drill. Arleigh seemed happy and trotted off with Tim, heading for their car. 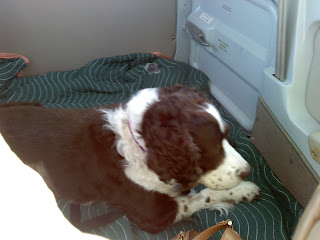 ﻿
﻿Mary and I walked Charleston back to the plane and prepared for the final hop home.  I made the decision to fly home VFR under the 6,500 foot layer with my plan to stay low at 3,500.  My ears were really bothering me coming into york and Mary said my voice was sounding like I was getting sick. Mary was correct, I had the sore throat head clogged nasal voice with my ears now feeling like someone crammed a q-tip in each ear and they were touching in the middle of my head.﻿﻿﻿
﻿﻿﻿I taxied out ahead of a twin engine that was waiting for a release and completed my run up. I announced my departure and climbed out of York on leg 3 of the journey.  I had a stiff crosswind and I needed to work to keep on center for the take off roll then rode the crab angle climbing out.  I turned cross wind and down wind then exited the area making a last call to advise our position and heading.

METAR KILG 271951Z AUTO 29021G29KT 10SM SCT055 06/M07 A2991
Charleston was curled up and soon fast asleep.  It was really bumpy but the tail wind provided a fast ride home. I was looking at 145+ ground speeds at 2400 rpm breaking 150 kts at 2500 rpm. I monitored Harrisburg approach then Philly before contacting the Wilmington tower.  I advised Wilmington I was 13 west, inbound for a full stop with the current ATIS and my altitude.  I was directed to enter right down wind two seven, report midfield. 08Romeo entered the pattern riding the proverbial rodeo horse.  Winds were gusty and it made for an interesting turn to final that required a pretty good bank angle.  With a steeper bank I needed to keep some extra speed in and when rolled out and aligned on center I was working to get slowed down. Approach flaps set and working the winds I made my way to the numbers. I keep my speed on the high side crossing the fence and working the flair adding the second notch of flaps and being patient. I ride it out and set down on center and smooth, we're home. The taxi to the ramp requires rudder work and full aileron to try and keep on center. I taxi through the ramp and turn away from my tie down to align for my push back.  Once shut down Mary and I both sit in the warm plane and pack up. My ears are ringing, I have the chills and I am sounding like froggy from our gang. It's good to be home.
﻿
﻿Mary climbs out first so she can bring the SUV to the plane. Charleston wakes when he feels the cold air rush in the open cabin door then wimpers as he watches Mary walk away. I told him it was ok, she is coming back. Charleston set his head between the front seats and let me scratch him, content with the comfort I was providing. First order was to get our passenger in the SUV and comfortable.  Mary and I cleaned out the plane but I was feeling to sick to try and cover in the wind. I didn't even note the flight time numbers in my log, I just wanted to get in the warm SUV. 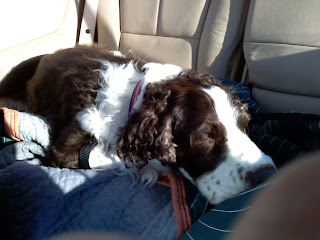 Charleston fell asleep in the backseat as Mary and Bruce (Charleston's new family)made their way to Red Eagle. We swapped a few text messages and before long they were pulling in the parking lot. Bruce took Charlie out to the grass area and two of their triplet boys joined them. What a nice family, they were really excited to have Charleston back in their life.  Mary and Bruce found Charlie in a vineland, NJ animal shelter and fostered him for Debbie and the MAESSR. After sending him to Debbie in Virginia for surgery he was now returning to his forever home.
Mary and I completed our first rescue mission, it felt great.  The look on the boys faces and their parents along with the love that Linda and Tim showed was priceless,  there are good people in this world. We were happy to meet both families and provide transportation for two very special furry kids.  Arleigh and Charleston, you were our first rescue flight. It was a great experience and I'm sure a memory that will be hard to beat. We are looking forward to our next mission!
FlightAware Flight Track KILG-KOFP
FlightAware Flight Track KOFP - KTHV
Posted by Gary at 11:41 PM

What a wonderful day in every possible sense - the rescue, the families, and the flying! Love the photos and the smiles on the faces. Looks like the dogs were great passengers, too.

I do have to ask... you said you were concerned about icing but never mentioned if you picked any up?

The dogs were great! and I got to log some actual, life is good!

Hi! I'm a MAESSR user and saw your link on the daily newsletter.
This was fascinating -- and the dogs seemed very blase' about the flights.
Thanks for posting!