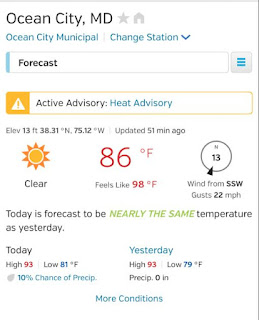 Finally, decent weather with no threat of thunderstorms until possibly late this evening.  Now if the high temps and humidity would have vacated the area it would have been perfect. Since last Saturday was scrubbed I was following the weather for an early morning launch.  I had already fueled 08Romeo earlier in the week so she was good to go. Ughh...it was hot and sticky just pulling the plane out of the hangar, I'm already soaked. 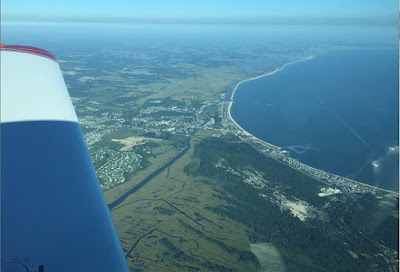 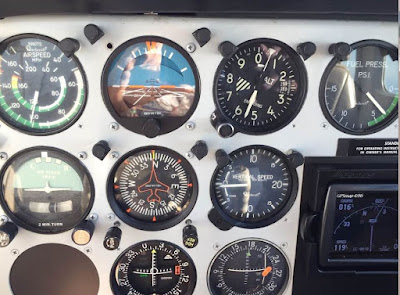 No flight plan today and no flight following, although I did monitor Dover and Atlantic City approach while crossing the Delaware Bay. At 7:30, density altitude at ocean city was fifteen hundred feet so I got into cruise climb as quick as possible to keep 08Romeo cool.  It was a smooth ride all the way to Cape May until I descended from six point five down to three thousand.  I descended through the scattered layer and the bumpy ride began. I tightened the lap belt and put the shoulder belt back on, just in case. 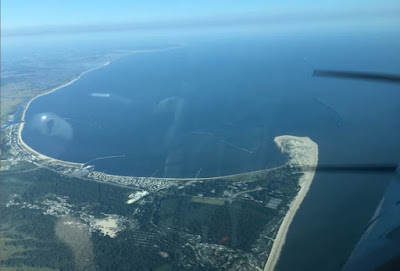 I switched over to the Millville CTAF, now 123.0 instead of the old 123.65.  No more Millville radio, it was nice.  Although, with the CTAF change came radio traffic from everywhere, you really have to listen for airport specific traffic.  I entered on a left base for runway two-eight and made a nice landing. I taxied in to Big Sky and found a spot out front to secure the plane.
I met with Tim C and after a good chat session we got down to business. Tim is familiar with my flying and trips so that helped with the ground portion. We reviewed documents, discussed the air portion and then would follow up with a review.

I do a quick walk around, verify fuel, then we climb aboard. I do nothing different in my normal routine, completing all tasks then verifying on my checklist. We're off to runway two eight for my run up and departure.
Tim scared  the heck out of me. On our first take off, after waiting for traffic to land, I make my call departing two-eight and I'm rolling. Runway clear, airspeed is alive, gauges good and I'm just coming to 55 knots when he calls out, ABORT! ABORT! ABORT! I instantly pull the power and get on the brakes..as he says car crossing the runway. I taxied clear and searched for my seat cushion, no need for lunch today the cushion is now firmly lodged somewhere between my butt and throat. There was no car, it was a simulated event and he wanted to see my reaction. I am now wondering what else he will spring on me.

Off to the practice area for air work, I hate the thought of slow flight. I was honest and told Tim that I do not really practice enough slow flight so we really worked on that aspect of my flying. Turns, climbs and descents along with some climbing and descending turns. Of course while we are hanging on the prop we may as well work on a few stalls. 08Romeo is a sweet soul...stall horn blaring and almost in hover with her nose pointed steeply at the sky, she finally breaks. I make a smooth recovery and Tim is satisfied. We did some simulated IMC foggle work, my other least favorite activity and some unusual attitudes while wearing the blinders, all went fine.
Tim pulled my power and I worked through my flow for an engine out, trimming for best glide and then performing a flow of pump on, check primer locked, carb heat on, check full rich, switch fuel tanks. I had picked a place to put the plane down and was pointing 08Romeo that way. Simulated no restart so I plan on the worst case. I will kill fuel and master on a short final and crack the doors open. Advise ATC or call on 121.5 and squawk 7700. Tim restores my power and we are climbing back for two thousand three hundred.

We finished up with some additional air work then headed back towards Millville. My first landing was a short field, not so fast, simulated plane on the runway go around. Cram, climb, clean, 08Romeo works her way back to pattern altitude. Next loop was a short field, nailed it. Last was a full stop and taxi back.
I was soaked, it was so hot out. We walked into the FBO and went through the log book update and sign off. then reviewed a bit more. I brain farted and missed a few answers.  Can you change a tire on your plane I said no which was incorrect. I honestly haven't read through FAR Part 43, the list of items that can be done by the owner, in ages. I take 08Romeo to Cecil Aero and that won't change, but I should know this stuff. He then asked if I could change oil on 08Romeo, yes.  Could I change the oil on his plane, No. We went through a few other questions and then finished up with a review.

I'm good for another two years!
Posted by Gary at 2:52 PM

Wow, you got a real work out! Did you do a review or were you testing for your Private? Lol

It wasn't to bad. Always good to get a work out and practice things we don't do everyday, it keeps us sharp.