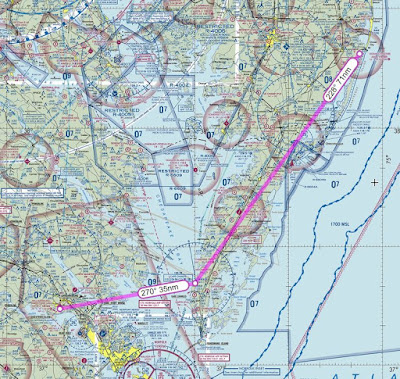 The weather was perfect and I really wanted to fly so I asked Mary if she wanted to fly to Williamsburg for lunch.  She agreed and we decided to take Ziva along since they allow dogs at the outside tables. Ziva hasn't been in the plane since we moved to Ocean City, almost two years. This would be an interesting day.

We headed over to the airport and I took on fuel, keeping it light since we had 110 pounds of Mastiff in place of the back seat and the temps were getting warm. Density altitude was 1500 and climbing.
The Flight

I filed but could not raise Potomac clearance delivery on the radio. I decided I would pick up in the air if need be, so with that we taxied out and launched. Todays altitude heading southwest would be 6,500. We climbed above a building layer and enjoyed cool temps and a smooth ride. I tried a number of times to reach Patuxent approach with no response. Odd, I chatted with the jump plane and replied to the good morning call out from the flight school owner as he taxied out. 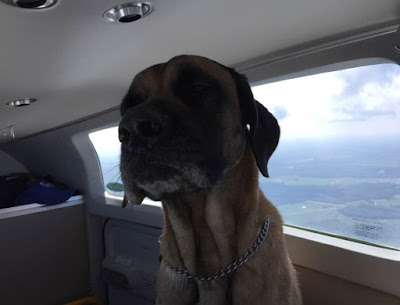 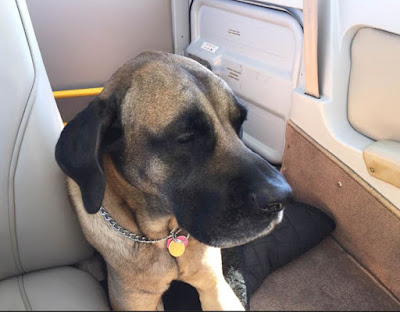 Mary seemed concerned but I assured her the radios were working. I figured I would try Wallops tower but they didn't answer either. Now I'm concerned. I keep 121.5 dialed in on com 2 to listen if I was being called, nothing. I even tried Patuxent on the Collins, nadda. I looked up the approach frequency for Norfolk that is listed for the Accomack Airport (KMFV) that I was just about ready to overfly. I made a few calls and finally Norfolk acknowledged me. They got my tail number wrong for both sectors despite repeating my 08ROMEO, they kept saying Uniform. 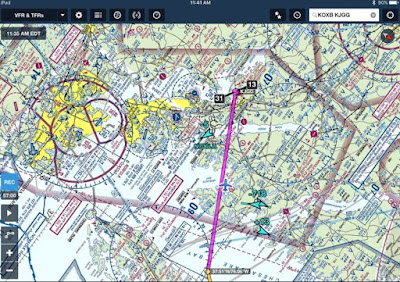 I cancelled flight following as I crossed the York river and tuned in CTAF for Williamsburg. I had already picked up the weather info and now I just wanted to paint a picture of the in/out bound traffic. I planed to cross mid-field and enter the right down wind for one-three but there was another plane entering on a forty-five so I entered on the crosswind and followed him in.  I turned final and watched the other aircraft clear the runway then added the last notch of flaps at five hundred feet. Smooth, on centerline with good stall horn, I rolled it on.  Mary said, perfect!

No sooner then Mary gave me an atta boy for the landing the crap hit the fan, 08Romeo shook like I was riding over speed bumps, the vibration was really strong, as if crossing the double yellow on a grooved road. I had the yoke buried in my gut as soon as I retracted the flaps and was slowing down. Thankfully, I landed long and was able to limp 08Romeo off the runway, shutting down just past the hold short. I was clear of the runway.
Ughh...I really didn't want to see what was damaged. I figured a tire and tube but silently said a prayer the rim wasn't damaged. With a quick rub of the rim on both sides there didn't seem to be any damage but the tube was hanging out like a tongue on a big overheated dog and the tire was really caved in. 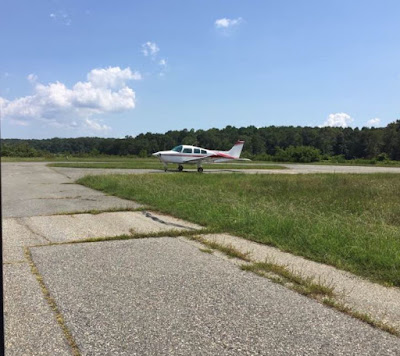 Ziva and Mary joined me on my walk to the terminal. There was a hangar open and it had multiple planes that looked like they were in for annual, I'm thinking I could get lucky. The lady in the office came out and I explained what I needed and she let us know the mechanic had just left for lunch. No rush, Mary and I were headed over to grab a bite to eat and we'll circle back.
When we finished eating we walked back over to the hangar and the lady working in the office said it was ok for us to bring Ziva in, out of the heat. Linda was very nice and kept Mary and Ziva company while I accompanied Shawn out to survey the damages.

We jumped in the golf cart with a few tools and a hydraulic jack then headed out to the plane. 08Romeo looked out of sorts, just sitting there in such a strange place to be shut down. I reset the jack bracket so the 'L' portion could get low enough to get under the gear. While I pumped the jack, Shawn removed the tire. Upon inspection he thought the rim was not damaged, said nice job clearing the runway, more than most would have done. 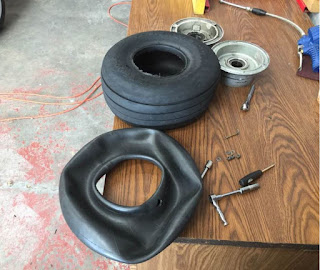 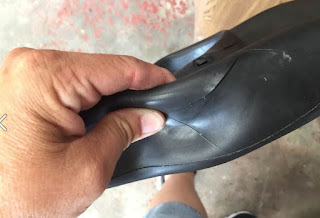 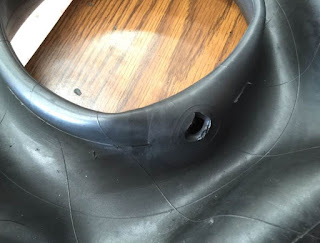 Back to the shop to inspect the tire and what was left of the tube. The valve stem was gone, nothing but a hole left in the tube and I found a cut that looked like the rim had maybe pinched it as I made a gentle turn off the runway. Shawn had a tire and a tube so at least we would be heading home today. After getting the rim apart and closely inspecting the tire he felt it was in good shape, no black dust or chunks of rubber and the sidewalls looked intact. Shawn did mention that it looked like there was no powder on the original tube and sometimes that can be a problem causing a bind, the powder gives it a little flex that saves the tube from pinching, I learn something everyday. 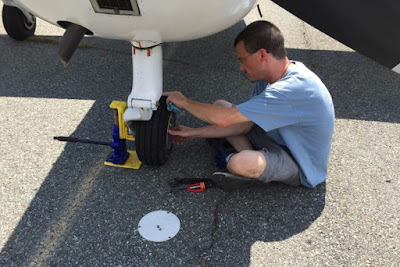 With the new tube now inflated to 40 psi we load up once again and cart on out to the plane. Shawn does the install and finishes with a new cotter pin and finally reinstalling the wheel cover. I let 08Romeo down and Shawn says she looks good with her feet on the ground. Yes she does. I start up and taxi to the hangar to square up the bill, we are good to go. 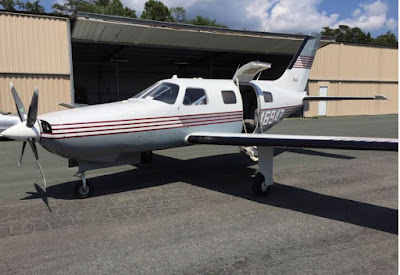 I had put a call in to our friend Ryan that hangars here at JGG while I walked to the hangar after the initial shut down at the end of the runway. I was now walking to the hangar after shutting down following the repair and Ryan drove by in his golf cart. Apologizing that he had just got my message he offered assistance, I thanked him and said we're good to go. It was great to catch up and he asked if we would like to get together with his wife Cathy but I advised we had the beast with us. Ryan went to fuel his new to him Malibu and I went in to square up the bill.

I did walk over to Ryan's hangar to see the new plane, it sure was sweet looking. I did peek inside and it looked to be well cared for and very clean. Nice to be able to fly above the weather and enjoy a pressurized plane with a 17 gph burn in cruise with 140 gallon capacity, long legs as Ryan put it. We did make plans on getting together next weekend after we get the ladies on board.

It was time for me to get moving so I headed back to the hangar and let Mary know I was done chatting. We thanked Linda and Shawn for their excellent service and hospitality and then headed to the plane. Once everyone was on board I got the fan turning for some cool air and taxied for runway one-three. This was going to be a VFR flight, I would get a pop up if needed. 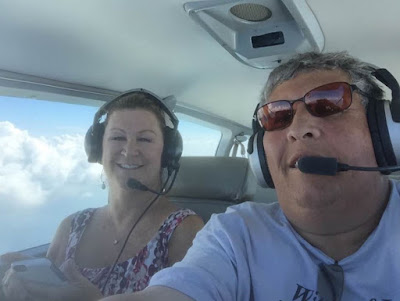 08Romeo launched towards the James river and then we turned north east while climbing out over the York river. We were soon over the Chesapeake bay at seven thousand five hundred enjoying fifty-five degree temps. Ziva was out like a light and Mary and I enjoyed the view. 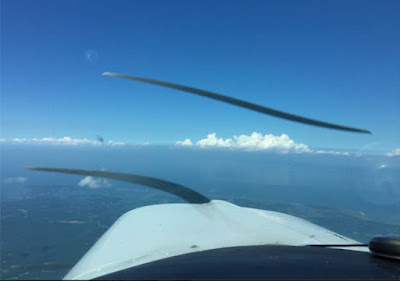 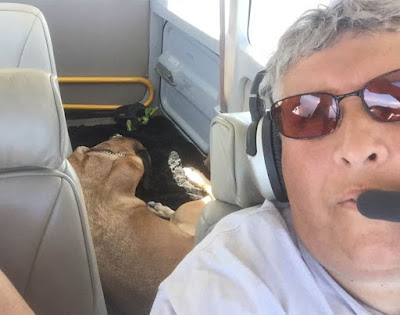 My Bride was very calm through all of this today, always positive and encouraging, making the best out of our unusual lunch date. I'm a lucky guy! I love you Mary! 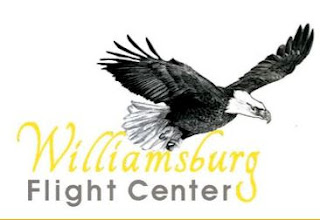 Thanks to the folks at Williamsburg Flight Center for a job well done. A true example of customer service and home things should be done, these are the folks that make General Aviation great.

Also a shout out to Ocean City Aviation who I placed a call to in case I needed to get Mary and Ziva home. The owner, Mike, had a plane dead heading from north Carolina and if need be I could have got Mary and Ziva on the flight. It's nice to have a charter service based at the home field. I did let Mike know we were ok and 08Romeo was repaired and heading home. Mike was nice enough to call this afternoon and confirm we were home. Again, great customer service and a good friend.