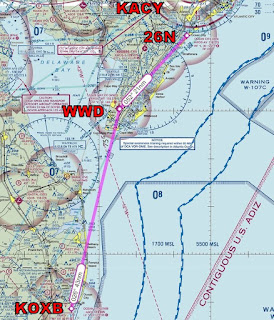 Today's plan was for a quick breakfast flight to 26N, Ocean City NJ followed by a lazy day around the house then ending with a Christmas party in Wilmington Delaware. Sounds great, right? I had 3 Tango Charlie on preheat Friday night and she was fueled, preflighted, and ready for the mission at hand.

Mary and I climbed aboard and taxied for runway two on schedule, 7:30am. The flight time was for thirty-five minutes so we should be arriving for the 8am meet up. Attending today's  breakfast would be Charles G, and his friend Jack,  Bob C, Chris N along with his Bride and her Aunt. This would be my first time eating at the OC Airport Diner.

The air was chilly, just hanging on the twenty-five degree mark, and the Commander was just ok for making heat.  I will need to investigate this a bit deeper.  We climbed to seven point five for crossing the Bay and let down as we approached the Cape May lighthouse. I made my position calls and advised Chris I was ten out. Charles also advised of his position.

I flowed through my GUMPS check and with the final call of three green, and last notch of flaps, I rolled it on the runway.  As I approached my turn off I raised the flaps, leaned a bit and pulled the throttle back to reduce RPM's. 3 Tango Charlie went silent, yep, I was coasting for the turn off, no motor noise, no Varooom.
I quickly radio I was dead on the runway and would try a restart to clear. Charles and Bob were going to orbit overhead while I got my tail clear.  No luck, the hot start didn't work and I had to tug myself off the runway.  So, after multiple hot start tries I climbed out, opened the baggage door and grabbed my shiny new, never used, tow bar. Holy crap! It doesn't fit my plane! Yep, no tow bar.  I grabbed the prop hub while Mary stepped on the left rudder pedal and George from the terminal helped push. 3 Tango Charlie was finally clear. Charles landed on two-four and Bob, now faced with a wind change, landed on runway six. Everyone was down safely, I was still at the far end of the runway.

A home/hangar owner asked if I would like to use his tug, it pulled by the wheel, much like mine at our hangar. I happily accepted and we got the tug hooked up. The unit operated with a throttle type grip, like a motorcycle.

I made my way to the ramp and eventually made it to a tie down spot. Bob offered to tug the plane for me but I figured my plane, my problem, my walk of shame.

Mary was waiting inside and had saved me a seat at our table. We all gathered and enjoyed a very good breakfast. 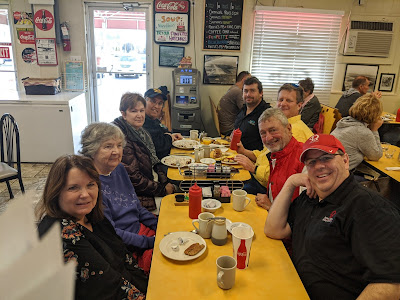 Once we finished breakfast I headed out for a cold start. 3 Tango Charlie fired up but didn't feel like her normal self. I increased the throttle and she ran smooth as I waited for the oil temps to come up. I know I looked at the engine monitor but I really don't remember what it read. I'm thinking it looked good or it would have registered in my brain.

Once the temps were up I did a run up. Power came up to two thousand rpm's and as soon as I switched to the right mag the engine rumbled, sputtered and backfired. Yikes!  I quickly switched back to the left mag and all was smooth. One more click to the right and she was running smoothly on both. Hmmm, did I have a fouled plug?  I increased the throttle and leaned, no change. I did another mag check with the same results, rough as heck then a backfire. I switched back to both and shut down. We were NOT flying home today.
Charles and Bob both volunteered to get Mary and I back to OXB.  Mary flew with Bob due to our weight and balance not working and I flew with Charles.
Here we are on the ground at Ocean City. I can't thank these guys enough, they really bailed me out today. I know I'm there for them whenever they need me.

A few pics to help identify the mags on the Lycoming IO-360 engine. 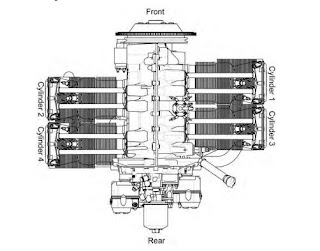 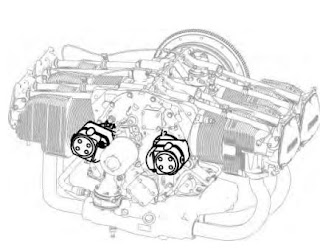 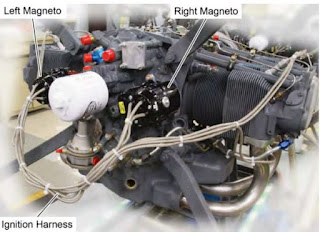 A shout out to Jeff D out of Woodbine Airport.  Jeff immediately answered my text on Saturday asking him if he knew of any mechanic that could service my plane at Ocean City NJ, since there was no shop or mechanic at the airport. Jeff gave me a name at Woodbine and his contact info.

When I returned home Saturday I took pics of my engine log book and texted everything I could produce, mag related, to the contact Jeff provided me from Woodbine.

I got a call Monday to let me know his shop had sent guys over to start the airplane repairs. The right mag was indeed toast and they were pulling the left mag to check on it. The weather was really crappy and they worked between the showers. These guys are dedicated. I will do a follow up post on the shop and the repairs once everything is completed.
Posted by Gary at 11:30 PM

Ugh. Sorry. Glad to see other pilots to the rescue, though!

Pilots, we're a brotherhood. I should be flying 3 Tango Charlie home on Thursday.

Excellent! I'd help you out if I could.