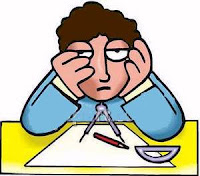 I am at the stage in my training that I will attempt to plan my cross country and hope to fly it this weekend or next week. The requirements are as follows. The student shall complete at least one cross-country under IFR (simulated or actual) that consists of: a distance of at least 250 NM, an instrument approach at each airport and three different kinds of approaches. Sounds like fun!

My initial plan was to head south but I reconsidered and now want to plan some airports that I have not landed at. I would like to

depart Brandywine KOQN and make my first stop Williamsport, PA (KIPT), home of the Little League World Series. From IPT I would head north/north east to Tri Cities in New York (KCZG) this is located just south west of Binghamton, NY. From this second stop I would depart to the south and shoot an approach at Allentown (KABE). Lastly, I would high tail it home on the short hop back to Brandywine. My preliminary calculation totals 290 miles, an ILS approach at IPT, VOR-A at CZG and a LOC into ABE and finally a GPS into OQN, Brandywine.
Where to start? I have purchased the applicable IFR Enroute Low Altitude charts, L-30 and L34 and VFR charts. I purchased new batteries for my electronic E6B and printed some nice and neat flight planning log sheets. I have been following the wx all week and this Sunday looks good with the possibility of some thunderstorms late in the day. I plan on being home well before that fun is scheduled to start.

First a bit of helpful info for understanding the flight plan and its process. The victor airways are something like the interstate highway system, except that the airways are above the ground and you can't actually see them—they're a system of established routes that run along specified VOR radials, from one VOR station to another. They therefore make flight planning easier, and they help Air Traffic Control to organize and regulate the traffic flow. The basic principle of operation of the VOR is very simple: the VOR facility transmits two signals at the same time. One signal is constant in all directions, while the other is rotated about the station. The airborne equipment receives both signals, looks (electronically) at the difference between the two signals, and interprets the result as a radial from the station. 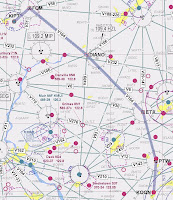 Ok, time to get started. My first order of business is to open up the AOPA Real Time Flight Plan program (RTFP) and Fltpln.com (FP) web pages. I first look up the most recent routes assigned for my choice of destination on FP and then plug that info into the RTFP program. I just like the nav log and look of the AOPA program. Lets take a look at the first leg KOQN - KIPT. The FP tool provides a few routes and I will go with the shortest 112 miles. The route will be 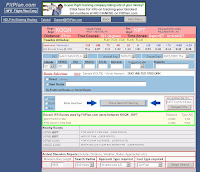 listed KOQN PTW V29 ETX V164 FQM. What's this mumbo jumbo you ask? Well, let's break this down so we can all understand it.
I will be departing Brandywine (KOQN) and heading direct to the Pottstown VOR (PTW), from Pottstown I will follow Victor Airway #29 to the East Texas VOR (ETX), from ETX I will follow Victor Airway 164 to the Williamsport VOR (FQM) and finally into Williamsport on the ILS 29 Approach. Seems simple enough right? Yes I guess it can be unless the route is amended in flight, then I will be making changes to the Garmin 300XL and acknowledging the amended clearance. I just hope it flows smoothly for my first time "in the system". 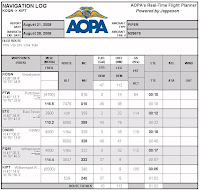 Each leg of the flight will follow the same process, then on game day (day of the flight) I'll update wx and plug in the numbers to calculate the effects of the wind on my leg times and fuel burn. The last look at the wx (on the ground) will also let me get a feel for what runway and approach I should expect. As a pilot gets closer to their destination we can check in with Flight Watch on 122.0 to get an updated look at the wx ahead, it works, I've taken advantage of this a few times. We can also tune to the Airport Terminal Information Service (ATIS), Airport Weather Observation Service (AWOS) and Airport Surface Observation Service (ASOS) report.
Posted by Gary at 7:59 AM