Mary and I decided that we would head south to KGED, Sussex County Airport in Georgetown Delaware and use the crew car or rent for the quick trip to Lazy Susan's for lunch. My Saturday instrument lesson was cancelled due to thunderstorm activity in the forecast and so we wanted to get some flying time in together this weekend. Of late all the hours have been adding up due to my quest for a new rating. Mary commented that lately I've spent more time with Brian (CFII)then her, that's not a good thing. She was teasing of course but looking back over the last few months she is right! We flew to Millville in April for breakfast and 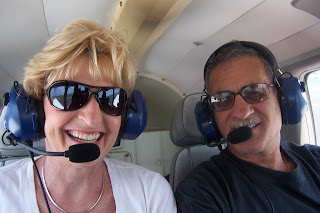 warbird tour, Ocean City Maryland for a wedding in May, a day trip to Block Island in June and Gettysburg in July.

We decided to ask my brother and his wife if they wanted to join us on the lunch run and they agreed. We would pick them up around noon and head to the plane. All present and accounted for we headed to the airport. There are a lot of planes out today from our Red Eagle location and we intend to join the crowd. I called AeroWays to top off 679er to the tabs since that is how I figured my weight and balance. I may as well take all I can carry. Scott arrived and fueled the bird and with that I followed with a sump test. Our passengers climbed aboard and Mary gave a quick briefing. I went through my checklists and got the fan running, the cool air felt great.


After contacting Wilmington ground we were cleared to taxi, runway two seven at mike. I finished my run up and was soon cleared to take off. I made it a nice gentle climb out, cruise climb to keep 679er cool and less passenger stress. I decided on staying under 3,000 feet so our second time pax's could see some points of interest and pick out familiar landmarks. The air was nice and cool at just 3.0 and that kept everyone comfortable. I picked up flight following just south of Wilmington advising 7 east of KEVY Summit level at 2.8 and VFR to Sussex County KGED. Dover approach gave me a squawk code and I was hooked up. We had a few aircraft called out along the way but nothing real close. Once I canceled flight following I heard a citation jet also going to KGED and stayed on frequency to hear his position report.

I had the airport in site as the Citation jet was just calling on 123.0, CTAF for Sussex County. The Jet traffic entered a right downwind and I decided to give plenty of space and entered a left downwind advising number two to land on runway four to follow the citation which I had a visual on. Smooth as could be we followed and taxied in behind the jet, they had a van brought out to them, we got to use the crew car. Lifestyles of the not so rich and famous.
I filled out a form with my contact info and we were off to lazy Susan's for lunch. It's about a 15-20 minute ride and traffic was not to bad. Of course I took some ribbing about our last visit to Lewes and the dairy farm ice cream stand as we passed by, we were still laughing about the smells. The

main highway was not to crowded and we went south a short distance needing to make a u-turn and head back north for our lunch stop. The parking lot had plenty of open parking spots which is a good sign. We were quickly seated and had our drinks ordered. Pepsi all around and I had a BIG ice tea. We each ordered a bucket of fifty clams, Joe and Janice didn't miss a beat and emptied their bucket and Mary and I were not far behind. We also ordered two dozen large steamed crabs and I had corn on the cob.

Our crabs came out and we got started

picking. We had each eaten one crab when the hostess came out and said we got the regulars by mistake and she would bring out the large in just a few minutes. Wow, pretty cool since I really had no idea how big regulars and large were compared to each other. Let me say there was a difference and the large had more meat then you can imagine. We barely got the two dozen finished between the 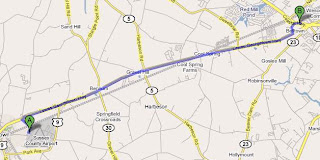 four of us and the ladies helped us men out since we each threw in the paper towels a crab or two earlier.

With full tummies we headed out to top off the tank in the courtesy car and enjoyed the ride back to the airport. I handed in the car keys and checked out the wx in the Pilots flight planning room while my passengers checked out the prints and enjoyed the a/c. I was ready to go in short order so we all headed out. I checked my fuel load to make sure I had an equal use on the way down then finished up with a walk around since 679er was out of my view while we went to eat. Everything looked good so I saddled up while the others looked at the aircraft tied down all around us.

Uneventful ride home which is always a good thing with a

slight diversion to overfly Lewes Delaware and the Ferry Terminal. The DRBA, my employer, had the Kalmar Nyckel tied up at one of our docks, I guess they were giving tours. If your in the area check it out! I turned 679er north and headed for home picking up flight following as I crossed the waterloo ATR VOR. Again we shadowed the

coastline of the Delaware Bay and River as we crossed into New Jersey. The haze wasn't to bad today since we could actually see the Salem nuclear plant cooling tower/smoke plume from about 30 miles. Dover ATC was pretty good today after they finally got my call correct, sheesh I say it slow and keep it full until they cut it short but today they were a bit confused.

tower. I was heading in from the south and was directed to enter and advise a five mile final at the Jersey shore for runway three two. I acknowledged and set up to land. My landing gets a grade of a B, to flat, no stall horn (must review the video) but on center. I rolled out with the tower and crossed 9-27 following our ramp neighbor to the tie down.

1.8 in the book, a full tummy and quality family time with my lovely Bride, brother and sister-in-law. They really had a good time and I'm pretty sure we can talk them into another flight. That's all for this fun flight, I'll soon be back at it with my lessons.
Posted by Gary at 8:33 AM

Sure was a great weather day for flying, glad to see you and Mary got some time together. My wife commented a few times how I was spending so much time with the "other woman" (Barb my instructor) jokingly of course.

Bob Ciotti and I had a cookout at my house last night, watching planes and helis fly over, while trying to keep my kids occupied.

Head in the Clouds said...

I'll have to check out GED sometime-- sounds like a great place to go for some fresh crabs!