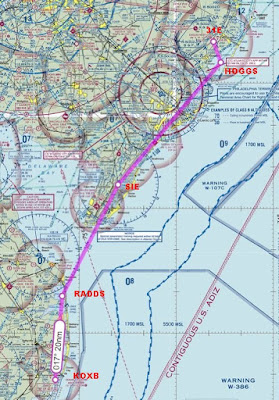 Mary and I made plans to visit her brother Mark and his family at their beach house on Long Beach Island. Mark and Lynn's home is located in Harvey Cedars, which is located half way between Surf City, New Jersey and the Barnegat Lighthouse State Park at the north end of LBI.

08Romeo needed to take on some fuel so we headed to the airport, making one stop for breakfast at McD's. We rolled through the airport gate at 7 am, called for fuel then sat and ate our oatmeal. John was on the fuel truck this morning and he brought us up to fifty gallons total with a sixteen gallon top off.

I had filed last night for the one hour hop and decided to pick up my clearance in the air since the NEW remote outlet frequency at OXB is already out of service. We climbed out of Ocean City pointing 08Romeo towards Cape Henlopen looking for five thousand feet for our cruise. I contacted Dover approach and opened my instrument flight plan and was directed to maintain VFR squawk 4733.  Hmm, ok this is different. I continued climbing and Dover returned with a route amendment direct Waterloo (ATR) then as filed. 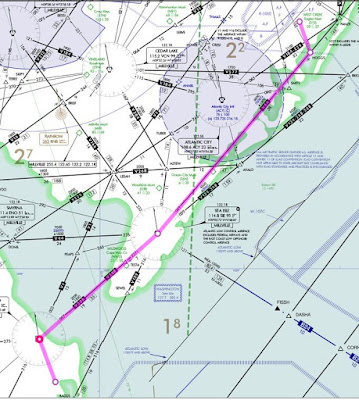 That's not really much out of the way and honestly, I expected it. As I made my way towards ATR, Dover amended the route again with a simple direct SIE, Sea Isle VOR. Not sure why he didn't just turn me direct instead of "amending" the route. It sure beats the heck out of me, I don't try and figure it out anymore. If it looks good on my route I just comply.
We crossed the Delaware Bay with no mic audio on the VIRB. Then as we switched over to Atlantic City it started to work, not a clue what's up with that. The flight was smooth with a tail wind, maybe seven to ten knots. Atlantic City stepped me down from five to four then three thousand and asked me to report the field in sight. The rest of my route hadn't changed, I was still headed to the HOGGS fix.
Atlantic City asked if I was direct Eagles Nest and I responded that I wasn't cleared direct. Approach turned me direct and I soon canceled in the air with the field now in view. As I turned final I spotted a tower left of center line that was now yellow on my Garmin 496 GPS. I had a clear view and stayed north, it's clearly visible on the video and you can watch it pass under the left wing. 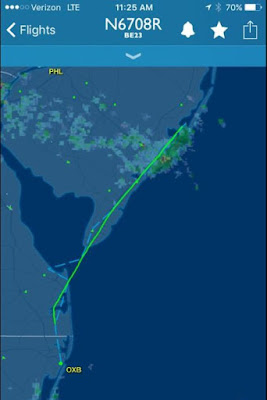 I made a nice landing and taxied for a tie down in front of the office. I remembered to note the office codes from the web page which provided access to the bathrooms, always an important item. The rental Jeep Grand Cherokee was parked and waiting for us so we picked up the keys and headed out to find our way to Harvey Cedars.
What did we ever do before our phones and the GPS maps? I plugged in the address and away we went.  The ride was maybe thirty minutes, just fifteen miles. It was fun to see the many shops and typical beach bike rentals scattered along our route. We made it to Mark and Lynn's, their house was the second from the dunes at the ocean, it was really nice. 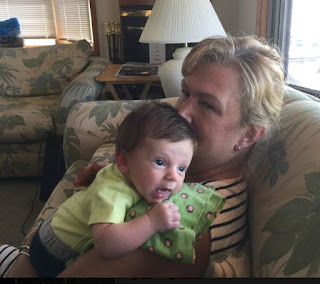 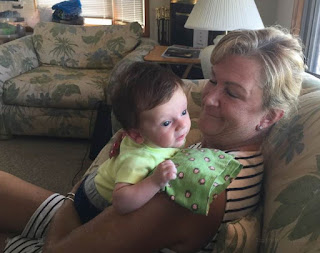 After  Mary had some baby time with Brennan we headed out for a tour of the town. Mark and Lynn have been coming to Long Beach Island for thirty (Mark) and forty one years for Lynn.  The impromptu tour was detailed and educational. I really enjoyed the harbor tour and our visit to the Barnegat Bay Lighthouse.
We returned to the beach house and enjoyed BLT's for lunch. Jersey tomatoes, the best tasting tomatoes on the planet. It was fun to see the new beach house and  spend some time together with family. As with any fun time, time seems to fly by. We sadly had to say our goodbyes and make our way back to the airport.

Once the rental was secure we headed into the office. There is a $15 landing fee for singles, a bit steep, but it does help the airport. I dug into my pocket for some cash but only had a twenty, two fives and a dollar.  I'm not leaving a twenty. I stuffed two fives in an envelope and Mary grabbed an extra self addressed envelope so I can send the remaining balance once we get home.

As I completed my preflight I heard voices then a scream, dear Lord, more sky divers. I can't get away from them! I finished up and climbed aboard 08Romeo, we were ready to get the fan turning. The winds now favored runway one-four so I taxied to the hold short and completed my run up.  I announced our departure and rolled for the numbers, adding a notch of flaps for  take off. 08Romeo climbed for the coast so I could gain some altitude before crossing above the Atlantic City class C airspace, whose ceiling was 4,100 feet. Atlantic city approach gave me five thousand, expect six thousand shortly. No problem, I wanted more altitude to recross the Delaware Bay. 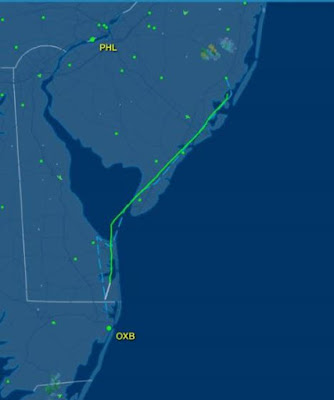 Atlantic city handed me off to Dover approach as I passed south of Ocean City New Jersey. I road along with Dover until safely across the bay then cancelled IFR for the last fifteen minutes of the flight.  Dover asked me to keep my squawk code and advise altitude.  I responded, leaving six for four thousand and went along my way. Once I was within ten miles I started my descent, working my way to two thousand.  I knew this would trigger Dover to cut me loose, and it did.
"08Romeo squawk vfr, frequency change approved."  I acknowledged then motored south with a smirk on my face. There was only one plane in the pattern at OXB, a Cessna, taking off and heading north, towards me. We swapped position calls and continued with that pilot stuff that we do.
I made another nice landing and taxied clear, heading  for the hangar. No clean up time for 08Romeo today, we needed to get home and let Ziva out. Our girl has been in the house since 7am and it's now just past 4:30, a long day.

The house was intact and the zoo was ready to eat when we walked in. With the critters squared away I started working on this write up but ended up calling it a night, I was tired and thirsty. I grabbed something to drink and headed off to bed.
Posted by Gary at 10:27 AM