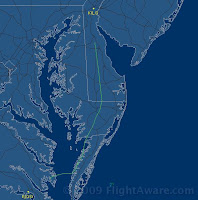 The wx was just to nice to pass up flying today! I did not have PT on the schedule, Mary was helping her Mom and Dad so I called John to see if he felt like taking a ride for lunch. I guess I got to the airport around 9:30 or so and slowly went through the preflight ritual. Uncover, remove the cowl plugs, pitot cover, chocks and untie. Climb up in the cockpit, master, beacon, nav, landing and strobes on for a light check. Climb out make a round and check the lights then back up on the wing to shut everything off. Add one notch of flaps for my preflight and very carefully get back on the ground taking great care hitting each step on my new step stool.
I completed the preflight and climbed in so that I could hook up the Garmin 496 and Zaon XRX in order to have things ready to go when John arrived. John got himself belted in and I 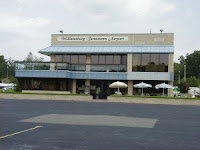 fired up 679er for our lunch run. We were cleared to taxi to runway 1-19 hold short at taxiway Kilo, I acknowledged. Run up complete I was able to back taxi and cleared for take off on runway one. I went to the four thousand foot mark and turned into the wind. Adding a notch of flaps for the warm wx and density altitude we launched in short order. I made a right turn on course, proceeded south and was set up to contact Dover Approach as soon as Wilmington cut me loose.
I made the call to Dover when I was about 7 miles west of Summit airport (KEVY). We were climbing for 5,500 and looking for any traffic. It was bumpy at times but not to bad as we took in all the scenery. You could see the white sands of Cape Henlopen, the tip of Cape May, NJ and farther along we could clearly see Ocean City, MD. I was tracking the Salisbury (SBY) VOR as my first checkpoint then on to the Cape Charles (CCV) VOR. Approach control was very good today as they usually are with handoffs and traffic. Once we were handed off to Norfolk we were turned direct to Williamsburg, saving some time not having to make my next point at Cape Charles but taking the fun out of tracking to the station.
O

ur direct to turn was somewhere over Silver Beach, VA and we were headed towards Point Comfort then towards Gloucester Point just north of the George P Coleman Memorial Bridge. My next visual clue is the Hog Island State Pond peninsula that points right at the Williamsburg Jamestown Airport approach to runway 31, I know, strange way to find places. I cancelled flight following and flipped to the JGG frequency, 122.8 previously dialed in. Williamsburg Unicom, Archer 28679er is fourteen East, request airport advisories. Unicom came online and the gentleman confirmed what the AWOS had stated. I acknowledged his report and continued inbound. At five out I once again announced my position and intentions, Williamsburg Traffic, Archer 28679er five east, midfield crosswind for left downwind runway three one, full stop. A Cessna nine miles south advised of his position and intentions for the field. I called out my downwind, base and turn to final adding my last notch of flaps on short final and setting 679er down with a slight chirp of the mains. I taxied clear of the runway and advised so the Cessna would know I'm out of his way. I ordered fuel and made way for Charly's restaurant.
The Archer took on 15 gallons of 100LL for a 8.3 gph burn rate, she usually does a bit better. Lunch was very good, as always, with my choice of the beef barley soup and a tuna salad on Charly's famous fresh bread, John ordered the BLT on a dark rye bread. After lunch we headed out to the plane ready for the fun ride north. After sumpping the tanks and a walk around inspection we climbed aboard for the flight home. It was really to nice to even consider going home when there is so much sky out there to explore, but reality kicks in and off to Wilmington we go.
It's awful hot out this afternoon and I had them top off the tanks so I went with two notches of flaps for 25* and a short field takeoff. 679er jumped off the runway and I held her in ground effect as my speed climbed. I retracted a notch of

flaps as we cleared the tress and once again showing positive rate of climb I took out the last notch. I set us into a ninety knot cruise climb attitude and called Norfolk approach. Norfolk Approach Archer 28679er, they acknowledged, I replied, Archer 28679er off of Williamsburg, 1,200 climbing 5,500, VFR to Wilmington, India, Lima, Golf, request advisories. Norfolk gave us a squawk code, altimeter setting and followed up with a radar contact now at 2,200.
Visibility was still very good but you could see the typical north east haze layer off in the distance to our north. We crossed the Chesapeake Bay and headed north up the peninsula with Salisbury VOR tracking solid. The ride got bumpy as approach handed us off from one station to the next. By Dover we were taking some good licks and my hip was starting to feel the pain. I soon canceled with Dover and flipped to the Wilmington tower (ILG) on 126.00. At 15 miles out I contacted Wilmington to let them know we were headed home. Wilmington Tower, Archer 28679er, 15 south, information Yankee, 3000 level full stop, a real mouthful. ILG acknowledged and gave us a straight in for runway one, report three mile final.
KILG 081751Z 32007G19KT 280V010 10SM BKN060 25/11 A2993
Wilmington Tower 679er three mile final runway one. I held off the last notch of flaps until over the numbers and worked the crosswind holding 679er off and making a very smooth landing. Dang! that felt really great! We were home, and the bumps finally put to rest. We covered the plane and headed out the gate, I was tired and thirsty. 3.6 in the book and I feel like I haven't been away at all. Time to finish that IR!
Posted by Gary at 6:35 PM

Nice blog you've got here. I like the attention to detail and might even help me in my training.

Thanks and welcome to the world of flight!! Good luck with your lessons. I've added your web page link to my favorites, it makes it easier for me to follow along.

I also kept a journal of my PPL lessons and still do for my IR lessons. Check out the links on the right side of the page, you will find some video's and a list of our favorite flights.

The more I read your awesome posts, the more I realize I really need to get more experience with ATC. Don't get me wrong, I love the NORDO flying out of Stewart for the true, pure aviation experience... but I know I could benefit a lot from a bunch of time spent talking with controllers.