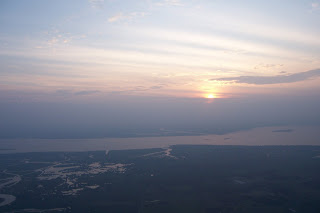 I got a call from MikeB asking if I wanted to fly this evening in the Cessna 172. I asked Mary what we had planned and there was nothing scheduled besides some R&R. Our neighbor came over as I was getting ready to leave for the airport and I think the ladies decided tonight would be a good night to pop the cork on a bottle of wine. Ok, all the bases were covered, time to roll. I grabbed my flight bag and toy bag (Garmin and Zaon) and point the SUV towards Wilmington. Any chance to fly makes it a great day or night in this case.

We met up at Wilmington around 7pm and the airport was busy. As Mike had mentioned all the meetings were over and the exec's were coming home. I walked through the pre-flight, not really assisting but not quite getting in the the way. It was good to refresh the C172 pre-flight info. I brought along my Garmin 496 for wx and traffic although we could not get the plug in cable with the battery attachment to work. Based on our past flights the G496 holds at least 3 hours of battery time, we should be fine.
I was working the radios and called for our taxi clearance, Wilmington ground responded and we were rolling out to runway one four. With the run up completed we were cleared to take off with a right turn on course approved. 25Uniform jumped off the runway and we were soon climbing out. Mike busted my stones a bit and climbed out around 90 knots cruise climb then climbed out in the 'Gary' mode at 800-1000 feet a minute......ok, I'm guilty. I tend to climb out um...quickly....no, well yeah, a tad steep on occasion. We had a good laugh and Mike said to remember, it's a don't spill the passengers drink climb, keep it s m o o t h.
I picked up flight following with Dover and they let us know the ILS approaches were out so we made a bee line for KMIV - Millville, NJ. We did hang on to advisories for a bit then cancelled, squawked 1200 and switched over to 123.65 the dreaded Millville radio frequency. I made my initial call to advise our position and that we were on the ILS approach for RWY 10 but I forgot the all important 'with information'. No, this is not a towered airport and I don't mean the ATIS this is the wx reported on the ASOS but Millville radio thinks they are in a tower, controlling from Leesburg, VA! I was very nice and acknowledged that we would report LADIE inbound so we continued on. Mike did a nice job down the glide slope and verbalized along the way which really helps me with my instrument training. There was a Cessna holding short at runway two eight, we went missed so he could get rolling, he thanked us.
The missed approach starts with a climbing left turn to 2000 direct VCN VORTAC (Cedar Lake VOR) an hold. Mike quizzed me on the entry and I said teardrop which was correct and our heading once crossing the station would be around 010 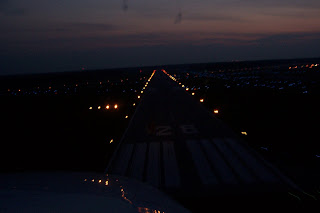 degrees. Once crossing VCN Mike turned out to a north heading for one minute and then turned right to 190 degrees in order to intercept the inbound course of 218 degrees. Things were looking good so we made a 360 degree trun and reset for the VOR A approach which was a 216 degree heading from VCN. We had a short run around six miles and once crossing VINER intersection we were clear to descend to 600. The VOR A approach into Millville brings you to the intersection of runway 14-32 and 10-28 from the north east. Winds were calm and Mike choose to circle to land runway 28, it looked real good with a nice landing just bleeding off airspeed and greasing it in. We taxied back for our departure to Wilmington.
25Uniform climbed out into the night sky and I was loving every minute of it. My time as a safety pilot was coming to an end as Mike gave me the controls. We role played with some vectors to keep my instrument skills sharp. It was ugly looking down the Delaware Bay, no horizon. There was plenty of ground reference but it was nice to "not see" and get some time inside the cockpit. Mike was eyes outside as I concentrated inside. I followed his direction for turn after turn. It took a bit to get used to 25U in the turns but it felt great once I settled in. I think we were about ten miles south east when Mike called the Wilmington tower and advised we were inbound for a full stop with the current information. Wilmington directed us to enter a left down wind for runway one niner.
I was now eyes out and had the Wilmington airport beacon (on top of the tower)over the nose. I track a bit to its left or south and set up for the down wind entry. About a mile out I turned right to enter the left down wind leg of the pattern. At midfiled Mike advised the tower of our position. We were cleared to land on one niner and I slowed to add in a notch of flaps. It does feel weird flying from the right seat and things are not in the usual muscle memory locations. It's sort of like getting in a rental car and reaching for the gear shifter on your center console when the gear selector handle in the rental is on the steering column.....you have all been there.
Left turn, down wind to base and I'm clear of any traffic sneaking in on final so I continue in. I normally add a second notch of flaps in the Archer but Mike has me hold off. Once established on final I add in the second notch of flaps, double check the airspeed and make for the numbers. On short final as agreed to by Mike and I both we transfer control back to him. I haven't landed at night in ages and this is not my plane so we previously discussed the transfer of command. Mike held 25U off and squeaked in another landing. We were home. The tower advised us to stay with them as we taxied back to the FBO. We gave 25Uniform a good wipe down cleaning off all the Jersey bugs we had picked up. A fun night flying as always with MikeB. We hope to give a pirep on the Sky Ox system very soon. My new 15cf aluminum tank should be here this weekend.
GPS TRACK
Posted by Gary at 4:56 AM

Good stuff, looks like we both got in some nice time at night these past few days!

I really need to work on night proficient....and currency too!