First Flight, "In The System"

Pictures will be added next week. Vince did the photo work and he is out of town until next week. I'm thinking his last vacation prior to school starting up.

Sometimes timing is a good thing. I finally passed my IR Check ride and I had my first chance to fly in the system today. The North East Flyers were scheduled to fly to KGED, Georgetown Delaware and shuttle to Lewes for lunch at Lazy Susan's.

I was up early checking on wx and printing out the necessary plates, alternate minimums and take off minimums for my destination and alternates. According to the 1-2-3 rule I would not need an alternate.

Alternates as easy as 1-2-3
The regulations regarding alternates are rather simple if you can remember 1-2-3. If the forecast weather at your destination, from one hour before to one hour after your estimated time of arrival, is at least a 2,000-foot ceiling and three statute miles' visibility, then no alternate is required to be filed.

The wx forecast was looking good for the flight and there was a great chance I would get some actual and have a wide safety margin with the ceiling at 5,500.

Mary was under the wx with her diverticulitis acting up and decided to pass on the flight today. I sent Vince a text message to let him know I had a seat open, he wanted in. I packed up and headed to the airport almost as excited as my first flight after completing my private pilot training. I went through all my checks for 08Romeo and a double check for all the information I would need for the flight. Vince rolled through the gate right on time as I was climbing in for the pre-start checks.

I had filed my flight plan with FltPlan.com and received a text from them to let me know the plan was on file. I should just turn on ships power and get my route entered but instead I got the fan turning then did the flight plan. I still need to work out the process. I contacted Wilmington to pick up my clearance and was ready to taxi. I would complete my run up and then call ground for my release, then get switched to the tower for take off clearance. A few more new steps in the process but it's new and fun. CRAFT is the simple way to copy your clearance and the short hand keeps it simple.

I picked up my release then cleared to depart Wilmington. I held a steady climb out looking for the multiple traffic call outs then, as directed, switched to Philly. Philly cleared me to 4,000 then changed it back to 3000 for new traffic just as I was climbing through 3,700. I acknowledged leaving 3.7 descending 3.0 and was still looking for the traffic. The cloud layer was just above us, so close I could almost touch it. Philly handed me off to Dover and they kept me at 3,000 for the rest of the ride. I was watching the layer just above us sitting at 4,000 it would not be today that we meet.

I had reported having the wx at Georgetown and was looking for the airport to report it in sight. Dover advised to expect a visual approach. I heard traffic inbound for the same airport, a corporate jet, and just about the same distance out, but from another direction. I had a feeling I was going to get bumped to number two for the airport so I reported the field in sight. I was now only about 4 miles out on a perfect 45 for runway 4. I didn't expect the following radio call.

DOVER: Sundowner 6708Romeo additional traffic (gave some name, the jet I heard) is inbound for Georgetown I will have to put you in a hold over Waterloo (ATR VOR).
ME: Dover, I will cancel my IFR at this time.

I was not about to turn outbound in VFR conditions only to get to waterloo and turn right back for spacing. I switched over to UNICOM and announced my position. The corporate jet did the same. I advised I was making a right 360 for spacing and would enter number two for the field. The jet updated his position and we worked it out. Vince spotted the traffic and things flowed very smooth. 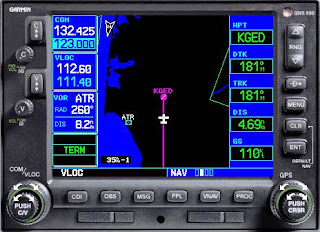 If wx conditions required me to hold it would have taken a few steps with the Garmin 530 GPS to set it up. I would double check my heading bug on the DG to remain on course to KGED then plug direct to the ATR VOR. Once that is entered I would click on the OBS and dial in the hold inbound heading. I would then turn left from my initial course direct ATR and enter the appropriate hold. By the time I get to the hold the jet would have been on the ground unloading its passengers. 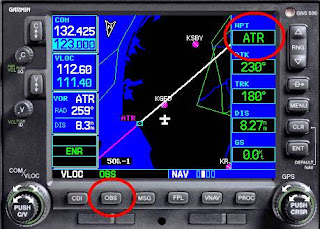 I dialed in a 230 degree heading just for an example but you can see the magenta "inbound" leg for the hold. The Garmin does make it easy to figure this stuff out on the fly.

I heard Rob (Robs Flying Adventures) in Cessna 55PD check in with Dover approach so I knew he and Ted were right on our heels. I didn't know Don's tail number so I didn't know how far out he and Rose Marie were. I had no clue what tail number Mike (110knots.com) and his son Steven were flying today so the best I could do is listen for his voice.

Vince and I secured 08Romeo and headed into the terminal to check for a courtesy car, there were none available. I checked out some phone numbers for local cab companies and decided to wait for the rest of the bunch to see what everyone wanted to do. Rob and Ted were next through the doors and Rob came in laughing. He cracks me up, "I'm a new IFR pilot", he says, "I'll cancel instead of the hold". He cracked himself up, nice, what great friends huh. I'm still laughing as I type this. I made a call for cab fare and it was $50 each way....that's no typo. Heck, we all decided it was great to just fly and meet up so let's eat here at the restaurant. I have to mention we did bump into Ron Levy that was having lunch with a client. Ron was instructing in a new light sport that his client owned. I don't think I know anyone that flys as much as he does, well, maybe Ted from Williamsport.

We pushed tables together and the nine of us ordered lunch. As always a good hangar flying session over good food. It was nice to catch up with everyone. Special kudos to Ted on his recent solo!!! I'm sure he got a good look at some tri-state area haze to go along with the Philly overhead tour. We didn't hang out to long after lunch. The forecast called for it to clear but it wasn't looking that way. The parade of pilots to the planning room was headed up by Don. We each took a turn checking our intended routes home. I filed earlier today and just had to pick up my clearance with Dover by phone. I think Mike said he still had to file.

We each completed our preflights and saddled up. It took Rob in 5PD a few tries at getting the 172 started. That bird does not seem to be an easy hot start. I gave 08Romeo three shots of primer and she cranked right off, something to be said for the carburated birds. Rob taxied out to runway ten and we taxied to runway four after I picked up my clearance with Dover Clearance delivery on the phone. I really love the blue tooth on the Lightspeed Zulu's. I had to do my run up and call once again for my release when I was number one for departure. I'm so used to talking with the PTT switch in the plane I hit the button when talking to Dover. Vince pointed to the PTT and I let it go, he's really on it! I told him he'll get old someday and only have muscle memory to rely on too.

Thanks to Mike for the Video

I picked up my release and the void times from Dover. I announced on Unicom departing runway four and launched. With one last call on unicom to report departing the area to the north east I switch to Dover approach. My route was direct ATR Direct DQO, 2000 expect 5000 in ten minutes. Dover amended that to cleared 5000 upon passing 1700 direct DQO (Wilmington). I acknowledged and off we went. It didn't take long for the visibility to drop off. I could see ground looking straight down at times but nothing over the nose until well north of Dover at the C&D canal. I logged .3 of actual. I was handed off to Philly and report having the wx at Wilmington. I was told to expect a visual for runway nine. I reported the field in sight and was handed off to the tower. Wilmington wanted me to report a right down wind for runway one four. I kept the pattern tight and made a nice landing. 2.0 in the log today for my first flight "in the system" and .3 actual. Fun stuff!!!

The plan is for 08Romeo to get a well deserved bath and wax, a spa day of sorts. Then Mary and I will start planning for a four day get-away to Jekyll Island sometime in late September or early October.

A great read as usual - and awesome to see you've already had the opportunity to log some actual!

Great job as always Gary! What a great flight in the system. Lots of safety margin and some actual IMC. Good to go! I logged about 1.0 actual during my trip and had a great time.

Great job Gary! Even though we had a few good laughs about you adn Dover, it was cool that you can now file and fly IFR. Nice to finally do a lunch run again with the NE Flyers and meet some people while building XC hrs.

link to the hd version of the takeoff video.
http://www.youtube.com/watch?v=9dC4xqJyMY0