Well not quite the song, but indeed a nice trip to Georgetown then a hop across the Bay to Cape May.

The aircraft we wanted to schedule was signed out until 11am so Mary and I got a later then planned start, which I thought was great, last time I was in one of these planes the weather played a huge part in me not enjoying the ride. So it worked out perfectly enjoying a light breakfast then heading out. After a preflight and hook up of the Lowrance 1000 we were ready to go.

Today is the first trip we had to use the Lowrance. N988LA is GPS-less. I had fun taking advantage of every opportunity to use pilotage. First checkpoint was KILG and the Delaware Memorial Bridges. Cloud layer was at 3000-4000 so I transitioned through the KILG class Delta then climbed through an opening to 6500 on top. 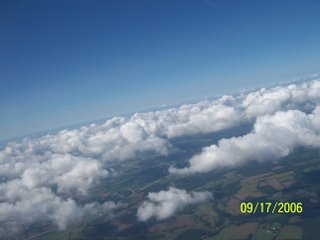 As a newly minted pilot, this was my first time "over the top". I made the decision to go over the top after looking down the Delaware bay a seeing the cloud layer extend along what I thought was beyond KDOV and with some tops at 4500 (my guess). The only opening was straight down the Bay but again I could not see an opening to make my way towards the west and Georgetown. I rode the "on top" 6500' south west to the west side of the KDOV airspace and found a great big hole and settled us through it down to 3000'. This has to be the most humbling yet breathtaking experience I have ever had to date in the plane with Gary. The pictures show the magnitude of the beauty that can only be appreciated by this view. I was thrilled that Gary and I had this opportunity together............ I wonder at times when I don't go up with him, what am I missing today? 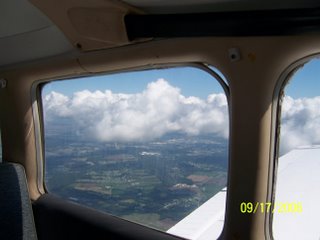 I was happy to ride along at that altitude until the 5 mile 45* entry to r/w 4 at KGED. I know 4 white and right of center but a nice landing......darn no video to help me out with this one. 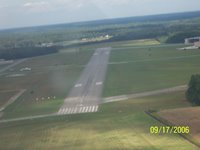 Good flight, had fun and of course the eats were good. I have learned very quickly not be surprised at the dinning opportunities that are awaiting us. We have enjoyed breakfast, lunch and dinner and I highly recommend the restaurant at the Georgetown Airport. Mary and I sat next to 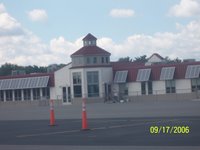 Bill and his wife, we met them at the LNS fly in (the one we did the "drive in") due to no checkride at that time. We chatted for a while swapped numbers (both brides love Bed and breakfast places) and were on our way to WWD. This is the part that everyone has been telling us about, making new friends and sharing in the adventure.A quick pass over Lewes looking for the tall ships, we 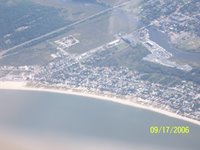 found none but did get a good look at the Ferry crossing. We then turned east and crossed the bay for a stop at Cape May. Mary has a nice shot of the Cape May Light House and she captured another short final and high but another good landing and that's my story, besides that zoom lense does not help ;).

A quick departure from Cape May and we were headed home to N99, good trip and a nice ride home!

Brandywine is now in sight. Calling out my 45* entry to downwind 27 at Brandywine I had a visual on a Cessna also entering. I turned out and re-entered on the 45* to be No. 2 to land. An aircraft was on cross wind as I had just turned downwind and he announced No. 3 behind the Piper (me). All is well as we three make our way home. On downwind I notice a CAP Cessna sitting at the hold short. No. 1 to land calls out his base and final, as we pass abeam each other I extend slightly and turn base also. The Cessna at the hold short announces his departure on 27. Mary and I both can't believe what we are about to see. This guy HAD to see at least one aircraft on the base final portion of the pattern or he was clueless. The No. 1 to land was on very short final as the Cessna began taxi on to 27. Repeated calls by No. 1 to land, calling out short final fell on deaf ears. The guy on the ground started his take off roll and No. 1 to land announced a go around very calm and collected. I watched it all unfold adding in the last notch of flaps early to slow down and give plenty of room, enough so that I could land as the CAP Cessna was now well upwind.

Ok, now this is the stuff that scares the *%%#* out of me..........what is the deal!! But the gentlemen did an excellent job of avoiding a potential accident, two thumbs up and he get's a that' a boy.

I met the No.1 to land guy at the flight school, he was renting the same as us. I patted him on the shoulder and said nice job avoiding the nit wit. I told him the Bride and I heard everyone of his calls and just could not believe it. 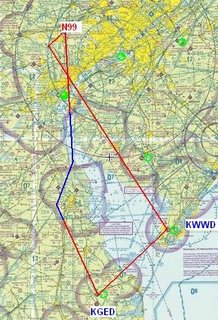 Except for the excitement at N99 it was a good day, we had fun, talked with some friends we had met at LNS and our 2.6 in the book leaves us needing only 4.2 in type to get into the club plane.
Posted by Gary at 5:18 PM