The Good, The Bad And The Ugly

To reference the 1966 movie classic, a bit of history. Clint Eastwood is the "good", slow to anger, but quick on the trigger, Lee Van Cleef is the bad, an elegant example of absolute evil and Eli Wallach is the "ugly", a menacingly funny, totally amoral bandido whose relationship with the Eastwood character consists largely of betrayals. The movie 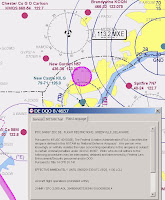 Fast forward to August 24th 2008. Gary wants to be the "good", working hard on his IR, trying not to beat himself up to much. Gary seems to be playing multiple parts, taking on a second as the "bad", since his flying today stinks. Wait, why not play all three parts and cap of this

lovely flight experience playing the part of the "ugly", yep, between altitude and heading, never mind the standard rate turns it was down right UGLY.
Ok, all the players are covered and I get no extra hobbs time credits for playing multiple parts. The day started out nice enough with the wx looking pretty good. No sooner then it was spoken the Government, in it's infinite wisdom, decided that the Vice Presidential candidate Joe Biden needs a TFR over his house. I could go on but I digress. TFR noted and noted again when listening to the Wilmington ATIS as I call ground for my taxi release. A change of pace has me taxi to runway one four as instructed. I'm off in short order climbing to 2,500' since my track to KOQN is directly over the TFR. I maintained above the 2000' block and didn't get a second look from the

tower or any escorts. My approach and landing into Brandywine was uneventful and I taxied off to find a parking spot. This was the end of my "good" flying.
The plan for today was to shoot some approaches and polish my skills with the garmin 300XL GPS. I purchased new clip on foggles for this week and they worked great, blacked everything out. We departed Brandywine and climbed straight out to 2,500'. I followed a few vectors and made my course changes accordingly. I set up for the GPS 27 approach which went fair. It was bumpy at times, I guess as we got close to the base of the cloud layer now moving in. I make that statement since I was vectored by my CFI to remain clear. My altitude is everywhere and I'm doing the ski slalom keeping my on course heading aligned. I easily get frustrated today and that's not like me and it's not a good thing in the cockpit. Deep breaths I tell myself as I go missed and instead head out towards Chester County. Brian senses my frustration and tells me that my procedures are fine and the briefings are

fine, stop fixating! Even though we want to hone the GPS skills I seemingly move the yoke with my body movement to program the 300XL, this is causing me to fight the plane. As my frustration level increases so does my standard rate turns, they get steep which causes my altitude to fluctuate. It's a vicious circle today.
Next up was the VOR A approach. Seems simple enough right? I don't think so, at least not for me today. I track to the VOR, cross and make a direct entry, looking good. I'm outbound on the 239* for one minute, ask if clear right and track inbound on the 52* heading, ok well at least search for it. I made the mistake of dialing in the MXE VOR on the GPS and distracted myself getting off course for half deflection. I get reined in and cross the VOR asking to make another lap so I know that I can still do this IR pilot stuff. Brian says to relax, do what you know to do and fly the plane, again with the stop fixating. At this point Brian asks if I had enough for the day, I respond oh hell no, not ending on a bad note. I turn inbound tracking nicely but forget to reset my timer. I don't fiddle with it since I have enough distractions and instead note my time on the clock display. 11:11:38, ok that means I'm looking for 11:15:25 or so for the Missed Approach Point sine the DME went kaput in the last week or so. Ok time's up and my altitude is hanging on 1150' for the circling to land. Ok nice and easy, add another notch of flaps and make a smooth 180* turn back to the runway. Nice, looking nice and off we go missed. My only positive point of the day and it was so short lived, the life of an instrument student.
My final approach was the GPS 9 and I pulled it off ok. Still fighting course and altitude. My last few lesson have really come together but today did knock me down a peg or two. I 'm instructed to look up, so with a quick flip I have runway nine almost dead ahead and Brian asks for a circling to land two seven. I slide to the right after making sure I'm clear and circle to land two seven as instructed. On final Brian again asks if I had enough and I tell him I want to land and end on a good note. He agreed and in we went.
It was a very humbling experience today, I am far from ready in my book but we shall see how the cross country goes on Wednesday. The plan is KOQN-KIPT-KCZG-KABE-KOQN. I'm excited but after today's rough go I'm a bit nervous. I'll report back Wednesday evening.
Posted by Gary at 1:12 PM