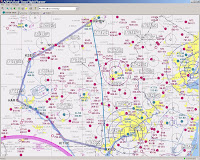 I dusted this flight plan off (October 2007) and decided to take a day and make it happen. The original plan for tomorrow was for Mary and I to fly to Nags Head, NC for a short get away vacation. Due to the Tropical storm Hanna heading our way I thought it best to cancel. No, not permanently, we rescheduled that trip for October 10th - 13th.

Instead I revisited this trip "back home", to the place my family is from, Wilkes-Barre, PA. I have made this trip many times by land and air but never once following the Mighty Susquehanna River. I have been toying around with a few stops and planning a flight for a clear sunny day. I plan on heading west towards the Maryland Pennsylvania border then turning north to follow the river. I guess my inspiration is from reading about the Citabria gang , aka the Trunk Monkeys, fun days of slow and low over the tri-state area and forging lasting friendships.

The Susquehanna River (originally "Sasquesahanough" per the 1612 John Smith map)the longest river on the east coast winds its way south from Otsego Lake near Cooperstown, New York, through the northern and central ranges of the Appalachian Mountains in Pennsylvania. By the time it meets the Chesapeake Bay, the Susquehanna River has flowed 444 miles. With an average daily rush of 22 billion gallons of water, the Susquehanna is the largest contributor of freshwater to the Bay.

In the mid-Atlantic states, it's called the "Mighty Susquehanna." It's the largest river lying entirely within the United States that drains into the Atlantic Ocean and the 16th largest river in the United States. The River's 27,500-square-mile watershed covers parts of Maryland, Pennsylvania and New York. This is about 43 percent of the Bay's 64,000 square miles of drainage basin.. I have listed the airports I would like to visit along my proposed route.

Total flight time non-stop to KWBW is 1.5 hours and along the flight plan pictured about 165 miles. I hope to make a day of it with the above mentioned airports for stops. I hope to post a video when completed.
Posted by Gary at 1:25 PM