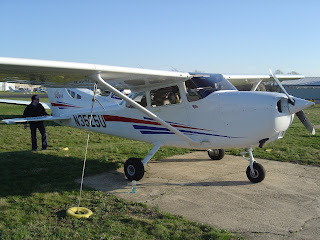 Mike and I swapped text messages, once he got his cell phone charged, and planned for some night flight approaches. The wx was a bit nip but overall not to bad. Work has picked up for me and I know Mike has been busy so a chance to get in the air is a welcome treat for us both.

We agreed on a 6pm departure out of Atlantic at Wilmington Airport. Heading southbound at 5pm has got to be the very worst time of the day. It was bumper to bumper and I still needed to stop by 08Romeo to pick up the antenna for the Garmin 496 so we could have wx. We both agreed that after our independent wx briefs we were good to go but having the added back up is what it's all about, especially at night.

Mike arrived ahead of me and was already out at 25Uniform. I walked out and across the busy ramp watching a Westwind get tugged by and a Gulfstream waiting to go. The sounds just invade you, I hear the Delaware ANG C130's landing on runway 14-32 straight ahead taking advantage of the Assault Landing Zone Lighting (ALZ), the Gulfstream I mentioned and a jet taxing to runway one. The smell of Jet A and the sounds of an active airport, great stuff! Please insert as many Tim the Tool Man Taylor grunts as you deem necessary.

3525Uniform was air tight and the heater was working just fine, always a positive. We were cleared to depart runway three two and after completing the run up we launched into the clear night sky. I know, where's the pictures, they're all tucked neatly away in my brain. Yeah I'll rub it in a bit, it was so crystal clear out that I could make out the Salem Nuclear plant belching smoke enough to judge wind direction.....sweeeet.

First up was the GPS 35 approach into KEVY, Summit Airport in Middletown, Delaware. Mike went under the foggles and I was on watch. Mike role played ATC and I should have done my share but I have to admit I was a happy passenger looking for traffic, sorry Mike. Mike said he was rusty and didn't seem to happy with the procedure turn at the Initial Approach Fix WENDS, but in his defense we had 25 knot winds at three thousand feet and by two thousand they changed again. I got to cheat a bit dialing in the winds aloft on the 496. We made a second lap at WENDS, I think he just wanted to punish himself then headed in to complete the approach. It was fun to watch the crab angle locating the beacon for EVY while moving toward the final target at our almost two O' clock. There is something to be said for watching the view outside and getting the chance to compare to the needles your flying, it helps develop the mental picture, well at least for me.

I made the calls alerting any traffic of our intentions and position with the approach terminating in a missed approach. Mike climbed 25U up to two thousand and direct to EPKAW at our 355* heading. We held for one lap then headed south. I got to fly the plane while Mike took a break and went through his plates for the GPS 27 approach into Wilmington.

It felt good flying tonight as I passed over 58M, easier to see at night then looking for it during the day. We skirted along the Chesapeake Bay to our west then I turned east towards 33N and the Delaware Bay. The plan was to contact Philly and ask for a practice approach. We transferred control of the plane once Mike was under the foggles. I worked the radio and fit my call in when I could, Philly was hopping tonight.

After obtaining a squawk code and confirming location Mike followed vectors as assigned. We were still at 3000 approaching the outter (4000)ring and heading north east at 055 degrees. We received vectors for a 035* heading, Mike suggested alerting Approach that we will descend VFR 2,500. Philly started to acknowledge then said maintain 3000, cleared into bravo. Cool!! Despite being very busy Philly cleared us into the bravo airspace for the practice approach. Good radio work gets you clearance, we were on it tonight.

I acknowledged our next turn to 360* and Mike flowed through the final checks. Philly was pointing us to intercept between the final approach fix GUSTE and KAHOE. Mike had already briefed the approach but gave it another once over. I was eyes out then decided to switch the Garmin 496 GPS to a direct KILG so I could read off distance. At the same exact moment Philly gave us a final turn to 300*, cleared GPS 27, contact Wilmington at 126.0, needless to say I missed the call, gave Mike a poke in the ribs and he hit the PTT and acknowledged. Thanks for the save! A smooth landing and roll out on runway two seven, obviously Mike just thinks he's rusty, he's on the money still. Thanks Mike for a fun flight and 1.5 of safety time!!

GPS TRACK (will post on Thursday night)
Posted by Gary at 10:57 PM