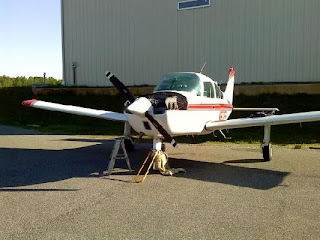 I got up extra early this morning and headed to the airport. I wanted to get the oil changed on 08Romeo before Rob (Rob's Flying Adventure) and I head out to Dayton Ohio to visit with fellow pilot/blogger Steve (A mile of Runway) this Saturday. Cecil Aero opens at 8am and I was wheels up from Wilmington at 7:15. The hop is ten minutes wheels up to shut down. I climbed out of the plane, prepared the top cowl for removal then went inside to say good morning. Frank was in the shop and soon opened the hangar door to get my oil draining. Oil drained, screen cleaned and seven quarts of new golden honey (Aeroshell 15w50)pouring in. I started up and ran for 5 minutes with throttle up to 1700 rpm then shut down for a final once over check for leaks. 08Romeo is good to go! Total time on the new power plant is 85 hours. The oil burn is one quart in 17.5 hours, everything looks great. Frank added the info to my new Adlog system and finished up the paperwork.
I was soon climbing out of Cecil County pointing the nose of 08Romeo to the twin bridges. Wilmington tower offered up a straight in for runway nine and i acknowledged. I simply pulled some power and held a steady descent making for a smooth landing. I did get on the brakes a bit thinking I would make the first turn off and I actually left some rubber. Not so smart, so I let her roll for the second taxiway which in fact dumps me right to the red eagle ramp. I secured the plane and headed into work.
Posted by Gary at 6:48 PM

Looking forward to the visit - have a safe trip out here!