Today was our official end to summer. Yes, we are sad, it is time to bring our motor-home north for the season ending cleaning and storage for the winter months.

Mike and I scheduled the hop on our last 08Romeo flight and mother nature decided to cooperate. Mary and I headed out for breakfast around 7:45ish thinking we would not have to stop for eats while driving the beast home. We finished up and then hit the bank in the box for some traveling cash before heading to Wilmington. 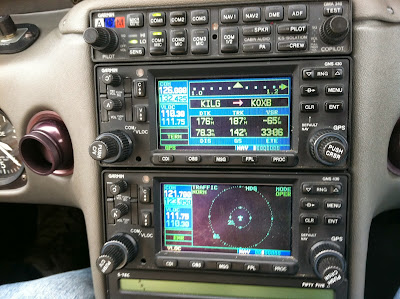 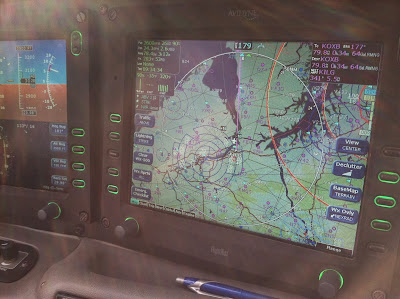 Mike rolled in right behind us and the three of us walked across the ramp to the plane. This was Mary's first close up look at a Cirrus SR22. Mary has flown in a Diamond Star DA40 and really enjoyed it. Mike had shuttled us to OCMD last year so we could bring the beach car home, Mary noticed the speed then. 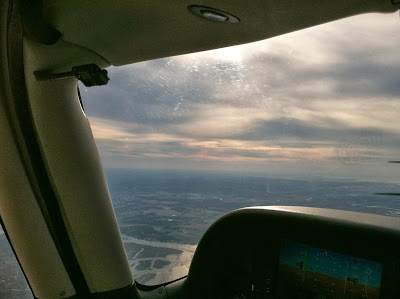 I think my Bride really fell in love with the Cirrus.  She carefully did a walk around and asked about the chute after reading the decal. Once she climbed in the positive comments about comfort and leg room were flowing, I knew I was in trouble. 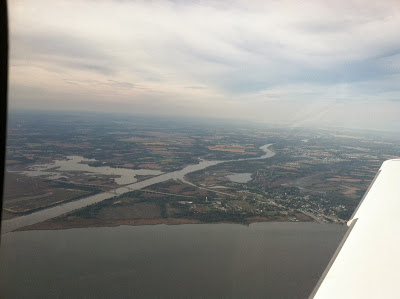 Mike completed his pre-flight outside and now was working through the inside list. Mary and I buckled in and Mike soon followed with an engine start. It is quieter inside the Cirrus despite all that up front power.  Our headsets were at our plane but thankfully there were two extra Bose X headsets available for us to use.

Wilmington finally cleared us to take off runway nine and we quickly accelerated, a noticeable power difference from 08R. We turned out to the right (east)as directed and remained east of the runway one center line as the tower requested. We cruised along smoothly between 158 and 170+ enjoying the view. I got some stick time and a lesson on the glass panel.  There sure is a bunch to digest but it's all good. 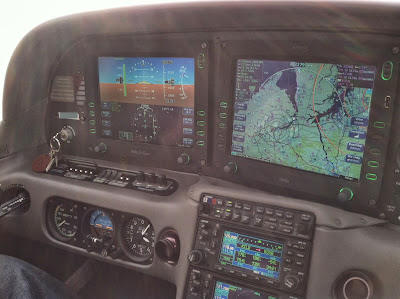 Mike decided on the LOC RWY 14 approach into Ocean City. Mike set up to intercept the 187* radial from the Waterloo VOR(ATR) taking us direct to LANDY (IAF). I got some autopilot education on the S-Tec 55 and its use in holds. Mike made a smooth landing into OXB and taxied off to park near the T-Hangars.

We called for a cab so we didn't have to drive our car back to the airport, instead, we could scoot out the back roads towards RT113 and home. Mike walked in the terminal with us then after we were good to go for transportation headed back out for the flight home.

Thankfully the cab was running a bit late so I got to see Mike take off just as a light rain started to fall. Mary and I walked out front of the terminal to wait for the cab and we could hear Mike climbing out and heading away in the Cirrus. While he would have a fun flight home I was thinking about my three hour drive home in the beast.

Our cab finally arrived to pick us up and $30 later plus tip we were standing in front of the motor home. It was odd, but we flowed through the close up just like our pre-flight ritual when Mary and I would uncover and get 08Romeo ready. I think we were ready to head home within twenty minutes. Mary raided the fridge for refreshments and the snack drawer too as I found a bottle of orange Gatorade and a pack of peanut butter crackers at my station. I had to add some drive home shots. The panel, not as interesting as the Cirrus glass, the traffic out our 'wind screen' and finally some airport reference. I know, it's just not the same. 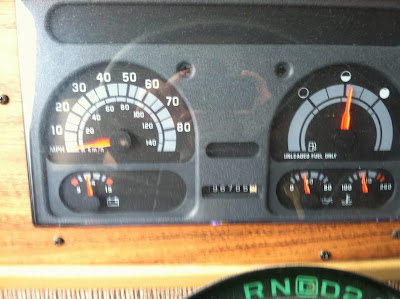 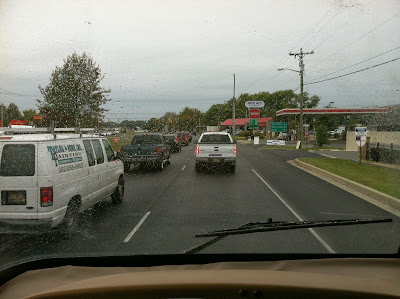 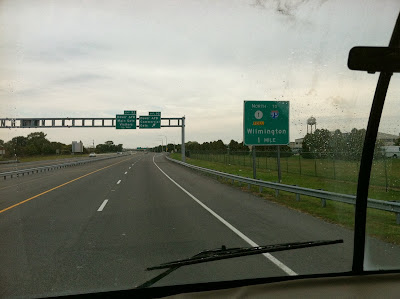 With the automatic leveling jacks retracted and lights on my panel confirming all clear I was now ready for my last visual walk around the rig before rolling out. Everything looked great, there would be no Robin Williams "RV" surprises. 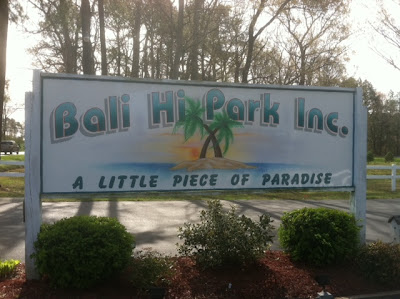 Sadly we exited the Bali Hi gates for the last time this year. We really enjoy our beach time and hopefully next year we will be selling the motor home and moving into our beach home. Mary and I have decided to retire to the Ocean City area and the first step is buying a home. Yes, it's very close to the airport so 08Romeo will have a safe new home when we eventually make the move.

Airplane status for the retirement years? Mary loves the speed and comfort of the Cirrus, who am I to argue. I'm thinking an SR20 will find a home with us in Ocean City....anyone looking for a real nice Sundowner?
Posted by Gary at 10:40 PM

Best wishes as you put your plans for the future into effect!

It sounds like that hop in the Cirrus may have been an expensive one... :-)

Chris,
It's a plan and we hope that it's a step in the right direction. There is a series of events that we need to happen in order to head to retirement.

Mary really liked the Cirrus, I really like the Columbia's but the price needs to fall a bit more. If Cessna supported the 350 series I may make that jump.

The search will continue for homes and aircraft,

Best place to sell a Beechcraft - BeechTalk.com. But you really should be looking at a nicely equipped used Bonanza, not a plastic Cirrus! Mine will easily cruise at 170kts. No parachute though.

Ouch, that's definitely going to be an expensive upgrade! They are comfy airplanes, though, no denying that.

Hope you guys enjoy your winter.