Since 08R now resides at KOXB, Ocean City Maryland I would need to reposition AND work out ground transportation. It was an early start getting 08R ready for flight and an even more concentrated effort to get her started. Dead batteries! I tried jump starting with the external plug but had no luck, this called for a direct battery jump. John from operations saved the day and 08R was soon running at a smooth idle.

It was a smooth clear flight north ending in a nice landing at the new Claremont airport, the  former Cecil County.  I tied down at Cecil Aero and locked up the plane.  Next was the task of getting back to OCMD.  I called Enterprise and soon had wheels, a Mazda itty bitty something.  I just hoped the rubber band wouldn't break as I pushed hard for home.  I wound this buggy up zipping along between 70-80 keeping with the flow of traffic.  As I approached my first toll it hit me I didn't have my EZ pass.  I dug through my pockets and came up with a five, two ones and a dollar in change.  The Bridge toll was three dollars and the Dover toll was also three, I was good to go.  I made the trip in two hours counting a fuel stop for 3.025 gallons for eight dollars.  This little buggy got got 37 mpg!

MONDAY 11/10
This morning I was awake around 3:30 and tried to settle back in for another hour.  At 4:17 the alarm went off and scared the heck out of me. I was up and ready to go, giving Ziva a pat on the head and the cats some chow. The temp on the truck gauges said 58 degrees in the garage. By the time I reached the highway, all of a few miles this is what I was looking at. 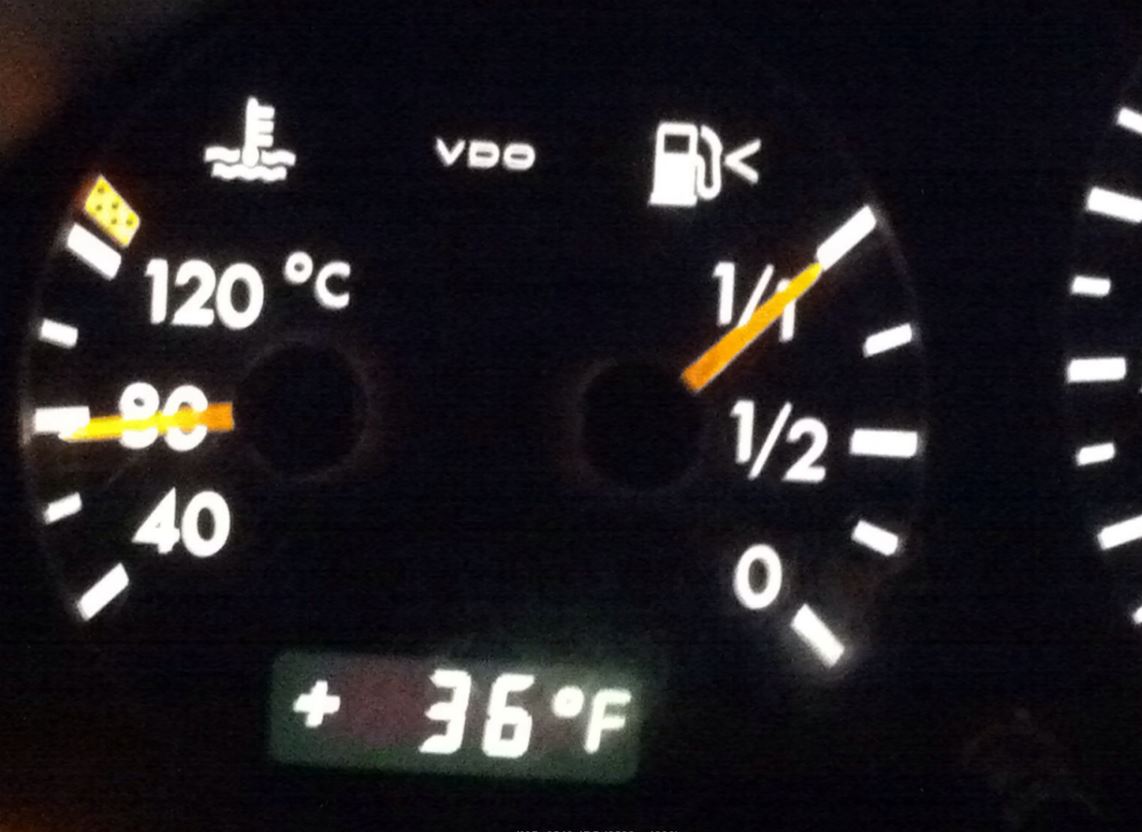 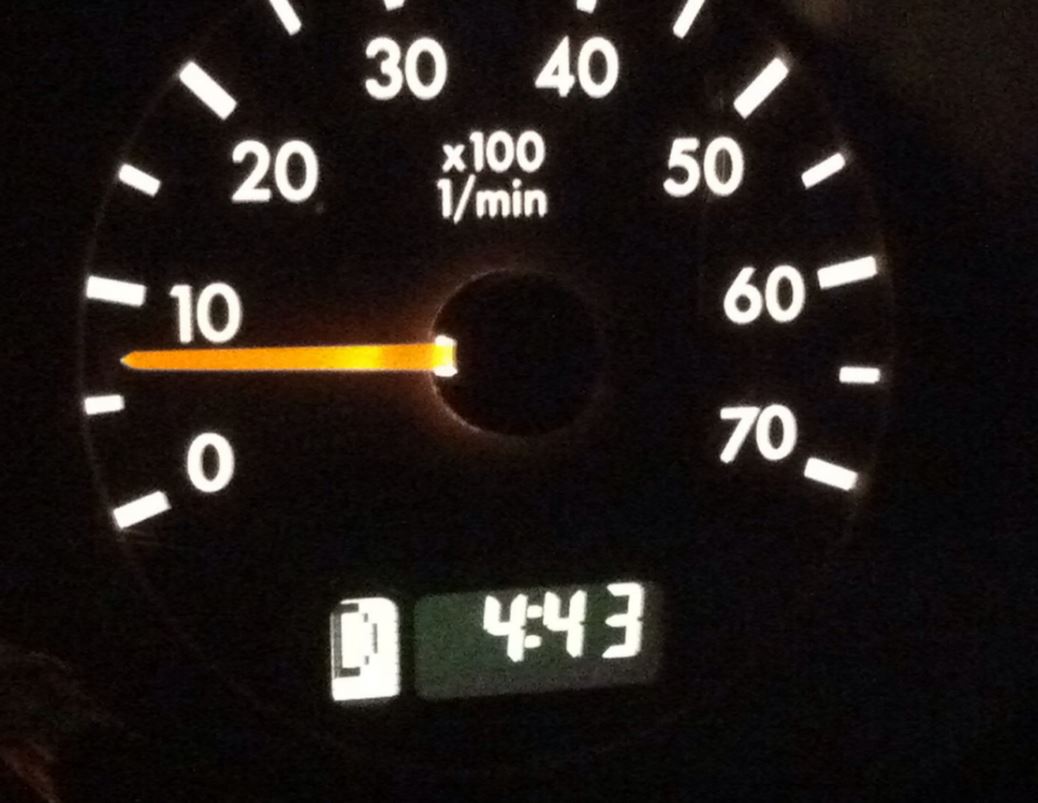 Brrrrrr...it's a bit nip.  I'm driving my SUV north to pick up Vince then a half hour backtrack to the shop to get started on the annual. It's good to see everyone and I do miss Keith who has worked on 08Romeo for years.  I hope to see Keith in Flagler Beach over the holidays if I can find him while we are in Florida.

Cowls off and the engine tests begin. Compressions look awesome averaging between 77 and 80 on all four jugs. I worked on removing inspection panels while Vince helped Stan on the power plant.  Plugs were cleaned and we were introduced to a new tool to check plug wear. 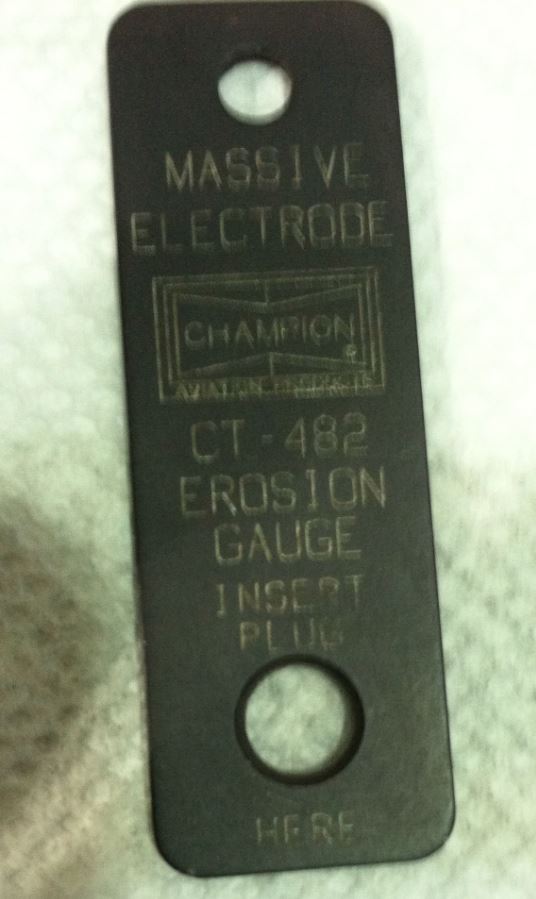 How does this work...well it's pretty simple. After getting the plugs clean and gap checked you basically use the larger of the two holes to see if the plug fits inside.  If it passes through, its time for a a new plug, if not you're good to go. How's that for a KISS explanation?  Look at the examples.
﻿
﻿
Next up everything was lubricated. I also took the time to rub a silicone paste on all the baggage door and cabin door seals.  I also took the time to apply this paste to my fuel cap seals, it really helps keep out water and extend their life cycle.
I pulled both batteries and checked the battery box, everything was clean. We load tested both Gill 25S sealed batteries and one was bad and the other very week, two new are on their way to the shop. 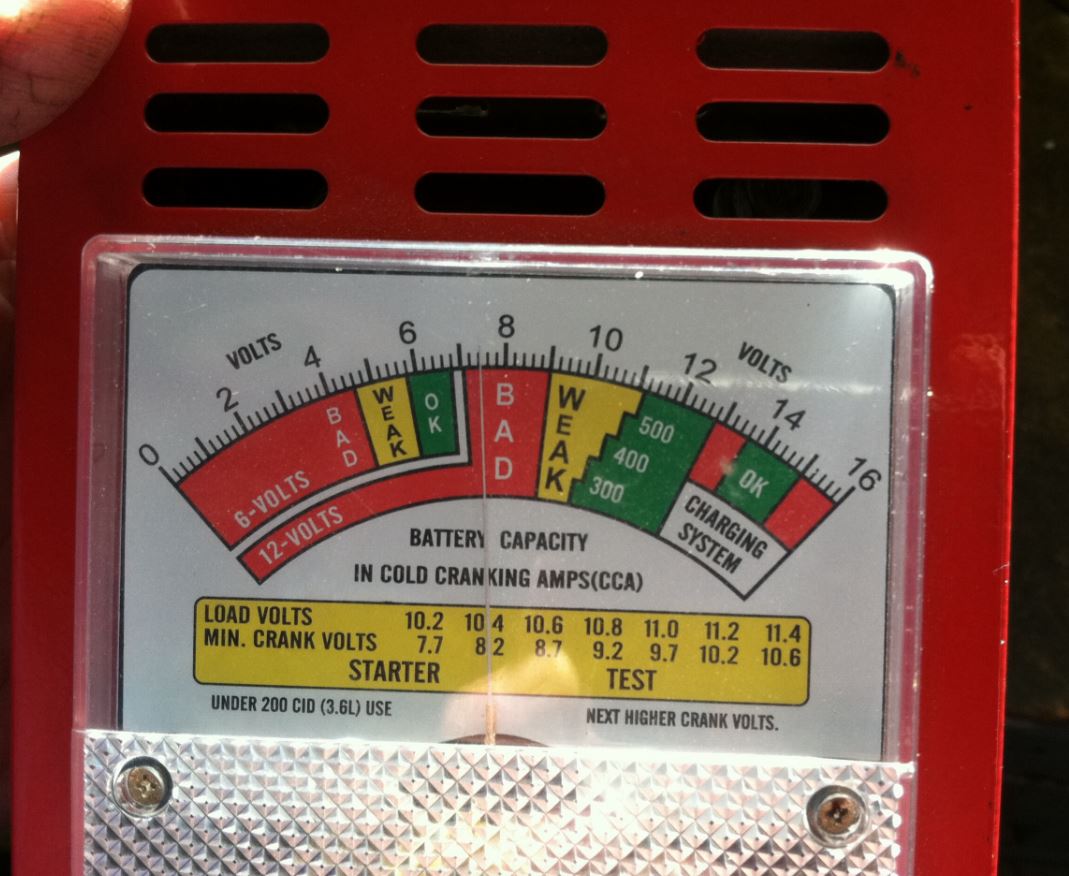 I was right at my 50 hour oil change tach time so that was completed along with taking a sample and tomorrow we will cut that filter open.  Aeroshell 15W50 has a new package!  Check out the bright color scheme.﻿﻿

After lunch we got 08Romeo in the air so Stan could get started on the main gear.  Vince and I worked on opening up the main spar panel for inspection. While removing the panels Vince noticed some hydraulic fluid around the perimeter, which needed further investigation. 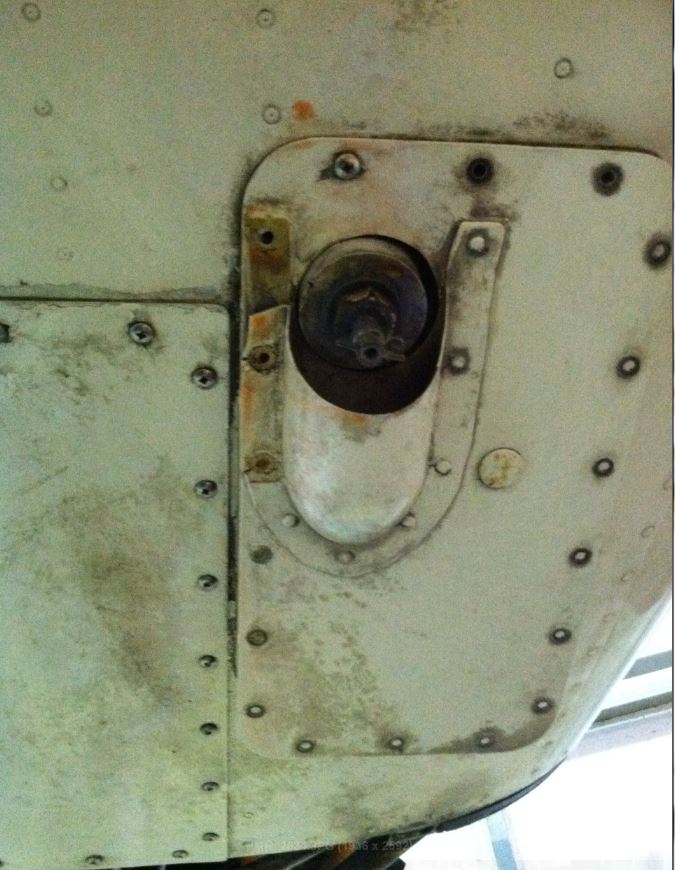 ﻿
With all the panels removed we finished up the day deciding we will need to remove the co-pilot flooring to take a better look at the brake lines that run through to the right wing main gear. Everything looked dry upon inspection of the copilot brake/rudder pedal assembly, including the master cylinders.

Another early start this morning, but not as early as yesterdays trip north from the beach. I picked up Vince around 7:30 and we walked into the shop around 8am. 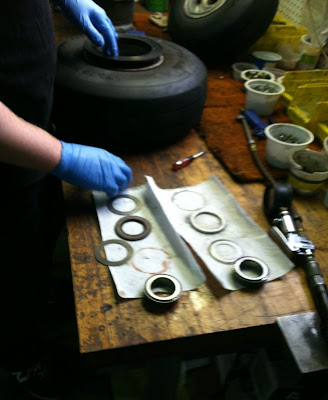 The gear was completed today with disassembly, clean and repack bearings. I needed brakes on the left main, I think this had something to do with last years caliper seal failure. Right side brakes looked very good so we left them on. I also had the shop replace the right side main tire to match the left that was replaced maybe 3 years ago. The wing inspection plates were buttoned up and we moved under the plane. 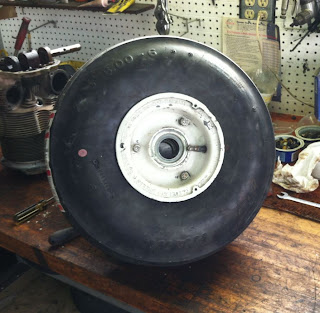 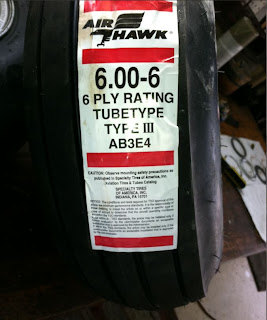 ﻿
While inspecting the main gear Stan found play in the right main trailing arm bushing/pin. At first I had flashbacks of the knee pin bushings but decided to remain calm. The knee pin had to be removed in order to provide enough swing to remove the cotter pin and pin/bushing set up for the trailing arm. 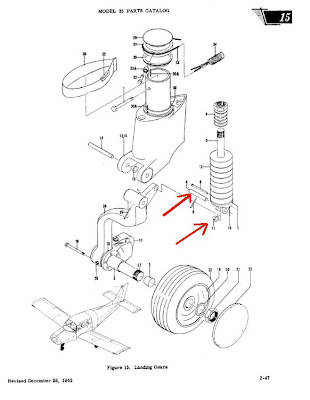 The bushings were not out of round and still seated with the pin tight with no play. The fix would be to add a shim or two as needed between the fork section and bushing. This worked out perfect and once reassembled the play was negligible. 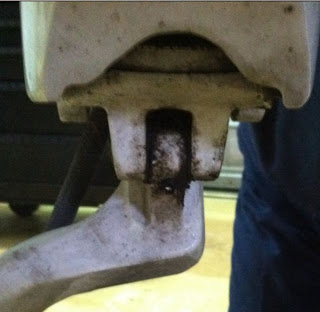 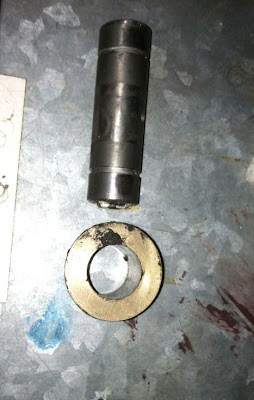 Late in the afternoon we found hydraulic fluid under the wing spar inspection plate. We left that R&R for one for the last inspections...because there are so many screws and it sucks to remove and reattach. 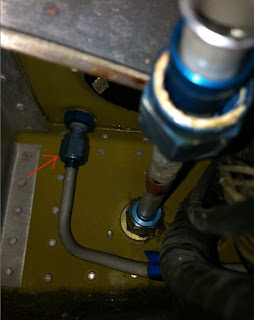 In order to make sure it was fluid from the co-pilots side we had to open up the interior to gain access to the lines that split right and left for the main gear. Stan found a definite leak from a fitting that passed through the floor just under the co-pilot Pedals. Vince found a potential leak in the wing spar area and saturated inspection plate.
WEDNESDAY 11/12
I was solo today, Vince was back in school after the Holiday.  It wasn't the same without him. He is really into the work and investigates each item on the work inspection list and follows procedures in the manual step by step. My solo order at Dunkin was one hot tea and sandwich only. 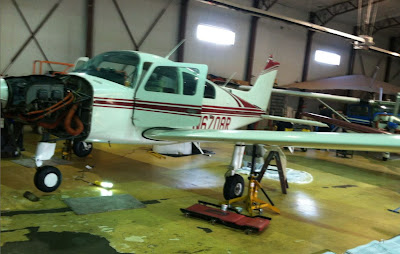 Stan and I worked on tracking down the leaks and getting them squared away. In order to reach the under floor copilot leak Stan had to remove the electric fuel pump. The wrench swing area was very limited but he got a few turns on the nut to tighten things up. Before we tested that fix we made sure the spar area was clean and ready to go, we wanted to test both areas. 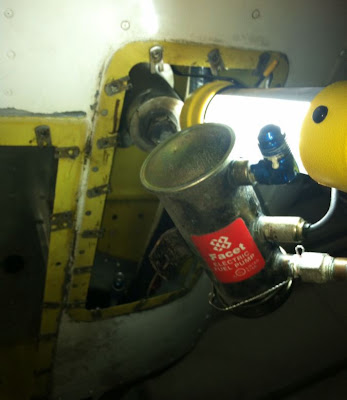 I climbed in and really pumped the brakes.  The initial check to locate the leaks revealed fresh fluid this time around everything was dry. Stan worked on a fuel line to burp the system while I was inside, we went master on in order to run the fuel pump. Pressure came up just fine and we were good to button up both plates located on the belly of 08R. 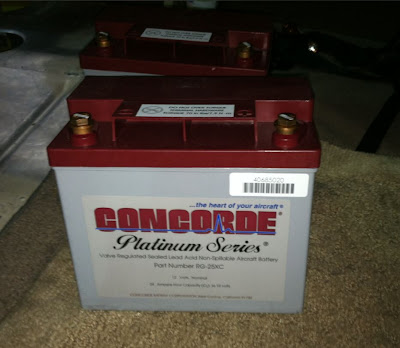 The new batteries were also installed today.  I switched from Gill to Concorde, I will see how much better they really are.  I did notice 08Romeo really cranked fast on the run up/leak test.
All the paperwork was completed and I handed over this years check. The two new batteries really drove the cost up but other than that things seemed pretty good.  I do like when the guys in the shop tell me how much of a pleasure it is working on 08Romeo.  I left 08R at Cecil Aero, it was getting late and I'm still not night current. Besides after three days crawling around on concrete floors I am pretty beat. I'll move the plane Friday or Saturday.