Mary and I were very excited about BACFest 2017. The event was held in New Bedford, Massachusetts - a new airport for the list and a new location to explore. Since we have family in the area we planed to head up early and visit with family, our friends Mike B and his wife Kim, and sneak a visit in with proud new parents Adam and Jeanine in New Hampshire. It was a great plan and we were excited to get in the air. 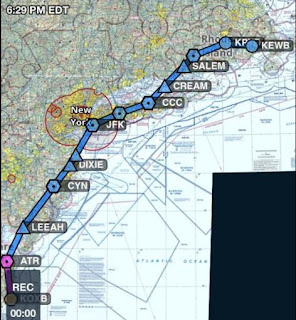 The planning was pretty straight forward, a simple IFR hop to New Bedford up the Jersey coast, across to JFK and out along the island before turning towards Providence and on to New Bedford. Watching the daily METAR reports I noticed New Bedford is much like Ocean City, early morning marine layer. This theory proves to be consistent the week prior to our departure and I schedule  our flight and arrival accordingly.

I will admit after just getting out before Irma hit Sint Maarten I'm a little bit weather gun shy. By the time we were to depart Irma had ravaged the eastern Caribbean and the state of Florida. Unfortunately, little brother Jose' was now piling on with destruction along the same path and now had turned up the east coast. We were lucky to get 08Romeo tucked into a hangar while Jose passed. Now I would have to contend with following that storm to New England.

With the weather grounding our flight we made the decision to drive north. Mary and I rented a car from Enterprise Wednesday night and ground pounded for seven hours from home to New Bedford. We left Ocean City at 2:45am and pulled up to the Hampton Inn at 10:15.  Traffic was fine until we hit the George Washington Bridge, wow, New York drivers.  I haven't had much road time in the last few years so the ride was, exciting, to say the least.  I can best describe it as watching a game of Frogger unfold in front of you, in real time. We survived. 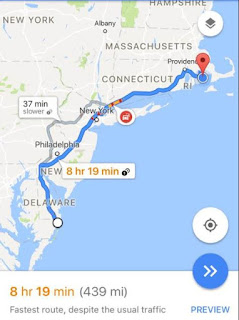 We have arrived!  Together we walked through the hotel front entrance and were immediately greeted by our friends from the Beech Aero Club.  Warm hugs and smiles made the long ground pound melt away.  We were so happy to see Candy, Mark, Susan and Doug along with the other members gathered in the lobby. The warm welcome really helped us both feel settled in, like being home again with good friends.  The group was soon off to explore, we still needed to check in.  I completed our check in and then asked about a place to eat breakfast since we only had some snacks along the way with my hot tea and Mary's coffee.  The folks at the desk suggested Jakes Diner, just up the street from the hotel.

I chug and plug on the iPhone and yes, it's only a few minutes of drive time. Jakes was busy so I figured the recommendation was spot on. We were quickly seated to the front right side of the diner and had a clear view of the parking area and highway, it's a busy town. It took a while to decipher the menu, so many different new items.  Our waitress explained that the diners menu highlights the Portuguese meats and spices, in particular the chourico hash. Chourico is a Portuguese pork sausage. I passed on the hash and stuck with eggs, home fries and bacon, so did my bride. 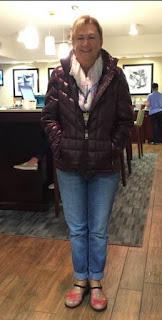 Since Mary forgot a jacket we needed to follow Bo's advice. "Once you leave home and forget something, buy it when you get there." We made a quick stop at Marshalls and Mary picked up a Calvin Klein jacket. Of course I took a picture for Sandra to see on Facebook, obviously Bo is with us in spirit.

We made our way back to the hotel and headed up to our room for hours of much needed  nap time.

﻿
We caught up with the group in the hospitality room for drinks and munchies later that evening and enjoyed the camaraderie. The spouses got to mingle, pilots did their hangar flying and as a group the Beech Aero Club came together as one.  BAC is like that friend you don't see every day but when you do catch up it seems like it was just yesterday.

There were two Sundowners (Chris and JP)and one Musketeer (Steve)that made it into New Bedford. Two Sierras made it to Hartford, Paul and Nelson along with Denis. Total head count for the event was 55!

We are up early and meet downstairs for the hotel provided breakfast.  Eggs and bacon for Mary and I along with some orange juice and toast.  The plan is to board a bus and two shuttle vans for Newport Rhode Island. There are shops to explore, museums to visit and the Breakers mansion.  Mary and I passed on the cliff walk tour and Breakers mansion, we'll visit another time. Instead, we decided on snooping in the shops along Thames Street and the Long Wharf Mall.  We dodged mist and showers through out the day but had fun. We checked out the Colony House at Washington Square, the Museum of Newport History and had lunch at the Brick Alley Pub and Restaurant. 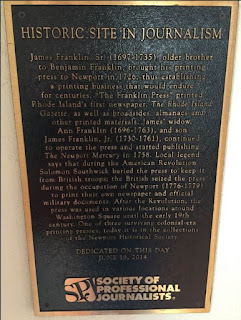 The bus ride was the hardest part of the day, next time I'll board the shuttle.  We actually road on a school bus, it worked out well but the suspension was brutal on my back and foot, yes the roads were that bad in some areas. We safely returned to the hotel for some much needed nap time. Mary and I both crashed, we were beat, maybe still catching up from our early rise yesterday. 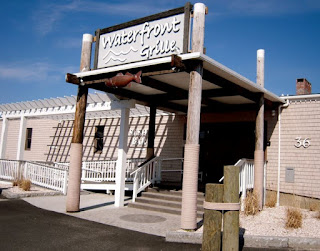 After a day of shopping, sightseeing and exploring we all headed to the New Bedford waterfront for dinner at 7pm. The restaurant of choice, Waterfront Grille, overlooks the boats in the fishing fleet.
We had a buffet style dinner of Scrod, veggies, Chicken and potatoes, all very good. After dinner the group headed back to the Hampton Inn for another hospitality evening of fun, laughter and door prizes. 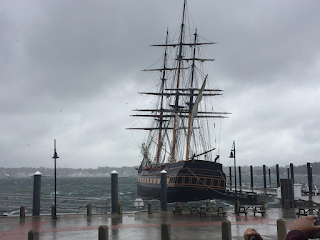 The group visited the  Cape Cod Canal Visitor Center and Museum in Sandwich. Lunch was at Seafood Sam's Restaurant followed by a return to the hotel for a nap, safety seminar was starting at 3pm.

Mary and I missed todays tours, I was sick as a dog when I got up and as soon as I felt better Mary was feeling under the wx.

I did manage to attend the maintenance seminar relocated to the hospitality room instead of the airport. Our seminar covered survival gear for signaling. Included in our welcome bag was a signal kit and we discussed items that we felt were essential. Paul W also did a show and tell on other items to include; life vests, signal smoke and flares that he purchased through West Marine. All these items are great additions to ones survival gear. 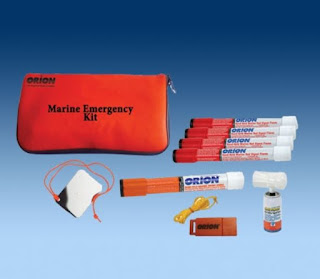 I have a back pack survival kit purchased from Sportys and I am going to add the signal pack that was in our welcome bag along with the Orion signal kit and flotation vests since we often cross the Delaware and Chesapeake bays. 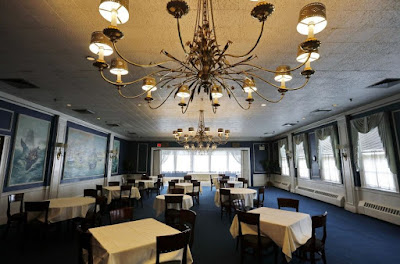 Following the seminar the pilots had just enough time to shower and dress for the party and banquet.  At 5:30pm the shuttles left for the Wamsutta Mansion. The cocktail party was followed by the Annual Meeting and Banquet. To start the evening we toasted BAC members who have passed, my friend Bo Boggs was in my heart along with Brads wife Ann and Dan Kirby, great members that left lasting impressions on Mary and I.

Our dinner started with a caesar salad, followed by carved prime rib with au jus and horseradish, glazed carrots and mashed potatoes. Dessert was apple crisp and ice cream. Yours truly had to give out an award since I am the new mid-Atlantic director, I wasn't given advance notice so Mary busted up laughing when they called me up.  Susan reminded her that her laugh was NOT her inside voice and everyone got a good chuckle out of that. Congrats Bob P on your Mid-Atlantic Regional Directors Award.  Mary said I did fine and didn't sound like an idiot. 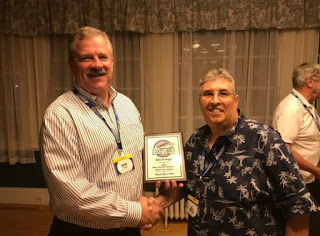 We enjoyed an excellent dinner and a fun time. Many club awards were handed out, memories shared and the evening was coming to a close seemingly as fast as it started. We all headed back to the hotel to enjoy some time for chat and sadly our goodbyes.  Some tears were shed and hugs were traded buy our traveling companions.
We vowed to catch up with Mark and Candy (Austin TX) when we head to Waco Texas and make a mini vacation of it. We also want to visit Charleston South Carolina and Jekyll Island Georgia so Susan and Doug (Atlanta GA) agreed to join us. Next years BACFest was announced and we will be flight planning for Louisville Kentucky!

Mary and I are planning on leaving early to once again get a jump on traffic. I wasn't sure of an exact time so my response when asked was when natured called in the early morning hours I would wake Mary and we would head out.

Departure day.  Natured called at 3:30am. Mary and I were heading out the door at 4am. We bumped into Rap and Charlotte at the elevator heading for Providence to catch their flight. We said our goodbyes and loaded up our rental Dodge SUV.  I once again chugged and plugged for directions and the trip time was six hours and forty five minutes.  There wasn't much traffic as we made our way, stopping only for a fuel top off and some Dunkin' Donuts munchies. Mary stayed awake for the entire trip just like Thursdays run north. I did post some videos on Facebook of our return travels and got some laughs. I struggled to stay focused as we entered the last few hours once crossing the Delaware Memorial Bridge into Delaware. I broke out the bag of Cape Cod chips and just kept eating to stay awake, munched on a few pieces of fudge too, it worked.  We dropped of the rental, headed home, and crawled straight into bed.  I did manage to watch some of the Eagles game and the entire Packers game.  Mary and I went out for dinner at Carrabbas and returned in time to watch the new Star Trek show.

Just over 900 miles traveled by car and I can't express enough how much I missed flying to BACFest. Next year we hope to fly 08Romeo. For now, we enjoy the memories made at this years event and treasure our friends that shared the experience with us.
Posted by Gary at 4:17 PM

That's really too bad that the weather messed up your plans. But what a great time. After our marathon trip to AZ, it took us days to recover. Hope you're both feeling better. Can't believe how much sight seeing you guys did in such a short time.

Sandie,
We were on a mission :) Included in there is one very sick half day for us both. We had a blast, and already missing our friends. I feel back up to speed today and Mary is almost there. We are looking forward to our next adventure!