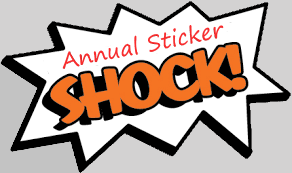 It seems like forever...
The muffler was sent out on 4/28, and finally returned on 5/21, twenty three days, three weeks of waiting. Since I had so much time I broke down the added cost of the plane sitting for six weeks and calculated the fixed costs wasted.  GPS data $72, Hangar $405, Insurance $405, but I did save fuel. insert eye roll.

3 Tango Charlie left for annual on April 15th, finally returning home this afternoon. This has been the longest and most expensive annual since I started flying. Oh how I long for the days of a simple fixed gear aircraft with basic systems.
This year I did have a few things I wanted to have done, and there were a few surprises like the muffler baffles and Pitot static leak. I knew I was due for the left Mag rebuild so at least that wasn't a shock and I had planned for the aileron hinge replacement. The shimmy damper needed an overhaul and the torque link scissors needed new bushings so I just upgraded both with a total parts kit from Aerodyme Corpration, the leader in Commander parts and service kits.
Let’s get in the air
I had previously set up another session in the Ocean Aviation Red Bird full motion sim to knock out the last approach I needed for currency. I decided on shooting the RNAV GPS 18 into Jekyll Island (09J) to get a sneak peek for the commander fly in destination in September. This worked out great since we were waiting for LIFR conditions to clear before launching on the bring the plane home mission.
Chet, my hangar neighbor, provided the hop to Delaware Coastal, KGED, to pick up 3 Tango Charlie. The weather was IFR until almost 11am and the fog finally burned off. The Ocean City airport was busy, the jump plane was hauling meat missiles and transients were coming in for the Memorial Day weekend. 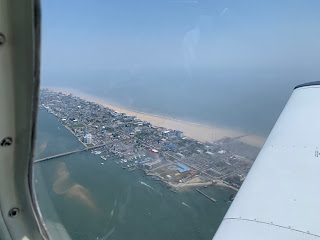 I managed a few pictures of the overlying conditions along the coast as we made our way north to GED.  The ride was bumpy but manageable and Chet made a nice landing.
I will say my shop is very detailed with inspection and procedures. I am grateful they do it right and provide that comfort feeling while I’m flying.
The list
Basic annual inspection  $1850 +27% increase
Labor 37.1 hours  $3265
Replace LH slick mag  $1230
R&R exhaust muffler, Plane Exhaust Corp. $1417
Comply with applicable AD's & update summary
IFR cert and correct Aspen barro setting $735
Alternate static source switch $34
EGT probe (1) $51
Oil 7 qts  20W50 Phillips  $66
Oil filter CH48110-1  $50
UPS shipping for exhaust $400
Gasket and seals $78
Shop supplies  $20
R&R #2 Cylinder intake tube gasket
Pitot system leaks *labor intensive
Aileron hinge o/s part
R&R shimmy damper o/s kit
Replace torque link bolts and bushings o/s kit
After settling up the damages we walked over to fellow Commander owner Bill H’s hangar where my plane was tucked away, safe from the birds and their byproducts. Thanks Bill!
Following my preflight Chet and I walked over to the restaurant in the terminal for lunch. I had a cheeseburger, Chet had a chicken Caesar wrap. Good eats and good airplane talk.
Rant On
While we were eating lunch a Pax river Blackhawk landed and taxied towards the terminal, holding short, still running, where my Commander was parked. I was not a happy camper. I walked out of the terminal and met with the one crew member that was the designated food runner. I greeted him and asked where they were out of, he responded.  I thanked him and said at least I know where to call to complain about the helo sandblasting my plane. He froze for a second and apologized. I said thanks and asked him to remind the pilot to get his head out of his ass the next time he keeps the bird running by other aircraft. As the conversation ended I noticed two men walked in from the flight line and just stared at me, lets say a version of MYOB was the response. I think as I get older I am definitely getting cranky or maybe it was the check I had just written.
/Rant Off
I walked back in to the restaurant and finished Lunch. Once we were done eating Chet headed over to his plane and I walked back to my Commander, giving it another once over after the Blackhawk windstorm. Once the fan was turning I checked all my systems then taxied for runway two-two. Chet was already on his way back to Ocean City and I was going to follow. I climbed out and with a positive rate of climb reached for the gear and selected up. The three green lights extinguished and I felt three bumps to confirm. It usually takes a total of ten to twelve seconds to complete the cycle and then the gear warning light goes out, it didn’t. Hmmm... I should have immediately checked the amp meter to see if the pump was running but I did not. I continued to aviate raising the flaps then re-evaluating my situation. Turning cross wind to down wind I decided to drop the gear and see what happens. The gear dropped and I confirmed with three bumps, three green, and the gear warning light now off in its normal cycle time. Ok, do I cycle again to check or finish my pattern and check on the ground, get it on the ground.

I made a nice landing and taxied back to the shop. Once shut down 3 Tango Charlie went back up on jacks followed by multiple gear swings and inspections. Naturally we could not reproduce the lingering light.
Once buttoned up I headed back for the runway to give this another try. We agreed that if there was another warning light issue I would call so the shop would get a good look with me flying a low pass. If all is good I will continue home. As 3 Tango Charlie climbed out I selected gear up and counted the seconds for the three green and gear warning light to extinguish, the process and timing was perfect.
I pointed for home and enjoyed the ride, it’s been six weeks. The new exhaust seemed to provide a bit more power but that could be my imagination. I set up to cross midfield for runway two-zero and made a sweet landing at OXB.
The rebuilt shimmy damper and new torque link scissor bushings were rock solid and there was no sign of any vibration from the NLG. Tomorrow I’ll put my 'stuff' back in the baggage area and give the plane a once over clean up, even though the shop gave her a bath.
This busy day has me wiped out. My plane is safely back in the hangar and I am headed to the house, once again a happy pilot.
Annual Part I
Annual Part II
Posted by Gary at 10:30 PM