It was a beautiful day to 'bag' work! I put in a leave slip Wednesday late afternoon and Mary and I planned for Tangier Island (KTGI)that night.

Mary and I were both excited to be off to a new destination. Friday morning now finally upon us and we were quickly packing the truck and heading south to the airport. Dassault Falcon Jet had topped of the tanks as I requested which really helped us get in the air. Pre-flight completed we saddle up and taxi out. We are directed to taxiway 'M'ike at runway 27, our almost always departure point. METAR KILG 221351Z 33010KT 10SM CLR 23/11 A2990.

A slight cross wind but nothing to worry about as 679er climbs out to pattern altitude and more. When cleared for take off on 27 by the tower we also received cleared on course (VFR South). As we passed through pattern altitude I turned to 189* and tracked the SBY VOR. I picked up flight following with Dover Approach about ten miles south of Summit (KEVY). Before you know it we were handed off to patuxent approach on 27.95. Approach was busy and it sounded like R-4006 was hot so I started to descend to 3,500 feet once turned to my new heading of 229* from the SBY VOR. I could see TGI in the distance. Approach advised to continue at altitude and report TGI in sight. I did both and approach terminated services. I acknowledged and passed on a thanks for the help today. 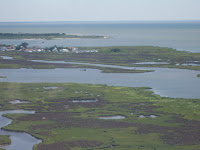 This is were the fun started. All the reports of a poor runway with bumps, humps and cracks along with reading all the accident reports prior to my flight had me on a heightened alert. TPA is 600' and I was there as we entered the left base turn for runway 20. A quick check of the wind sock showed winds from 300 degrees with a stiff windsock dancing back and forth. Deep breath, easy on the yoke I add the second notch of flaps and that's all as I make my way for the numbers. Air speed jumping 10 knots and 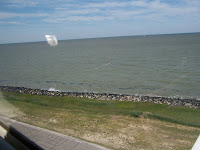 the winds now pushing me pretty good, I continue to crab in. Runway looks like crap, I'm landing long so I continue a slow low pass for a good look see then decide to go around. Full throttle, hold the nose level, build speed and climb out. Once clear of the runway and terrain I take out a notch of flaps. No sink, still climbing I take out the last 10* just before my crosswind turn. OK, regroup, re-evaluate and decide for another go. The sock is now favoring runway 2 but swinging back to the same cross wind for 20. Checklist complete, a notch of flaps followed by a base to final turn. Looking down the runway and glancing at the sock the winds have changed showing a full sock of tailwinds. Grrr Grumble....slowing 60 kts, floating, the 679er brick just wants to sail on and so we do. I announce going around and flow through the steps. 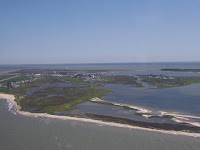 We climb out and Mary is just taking it all in and I know better then to say anything but my radio calls. I climb out on crosswind take a look at the sock again and it's favoring runway 2 again. What the heck! may as well give it 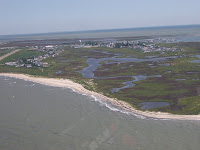 a try. I circle out to my right calling my intentions and re-enter on a right base for 2. The winds are full sock slightly favoring 2 but here we come. Over the runway, nice and easy again at 60kts, adding power, stall horn, chirps and we're in! This runway stinks! cracks, grass and bumps. We taxi to parking and secure 679er.
There is not a single person around. We walk towards the 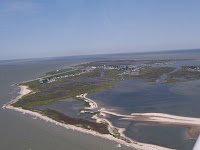 trailer homes behind the ramp but not a single person even acknowledges us. Mary and I decided to walk to town and had to dodge a golf cart coming over the bridge, again no hello's, kiss my ass, get out of the way....NOTHING!

This place is freaking us out. We stop and chat for a bit as a scooter goes by, again no hello, no response. That's it, 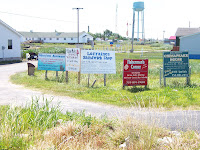 we're outta here. Mary is creeped out by the people and the place and I am just to happy not to deal with miserable people. We walk back to 679er and bug outta there. This place should be used for some freaky Steven King novel, we will NEVER return here. They can keep their little world and its crappy airport!

We flight plan in 679er for Ocean City Maryland (KOXB) and prepare to get underway (the red leg of top photo). We depart runway 2 climbing out to 3,500 direct to SWL VOR (Snowhill). Rock solid track as we cross the Bay getting a good look at Wallops flight Facility to the South East. I tune in the ASOS at OXB and note the reported winds.METAR KOXB 221553Z AUTO 33011G25KT 10SM CLR 27/09 A2988.

I had flipped over to CTAF 122.8 and could hear clear to Williamsburg, VA. I reported my position at 10 miles out requesting an airport advisory. OXB folks call out the winds and note 32 as the active. A simple confirmation to what I had scribbled down from the ASOS. Another aircraft, a cirrus was inbound for a full stop about the same number of miles out. We looked for each other as we reported our positions. I turned to the north to reposition for a 45* entry to the left downwind for 32 and announced. The cirrus called out his base turn and I had visual. Mary and I turned base and final followed by a "firm" landing. 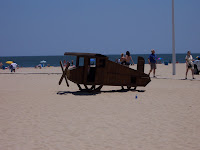 With 679er secure, HEY that's not me on the beach.....honest! No we were safe at OXB. The terminal ramp is being repaved so expect to park over near the Hangars. A 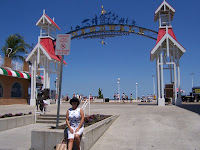 very nice gentleman was waiting for us as we climbed out and gave us a ride on a golf cart to the terminal so we could 'take care of business' and grab a taxi ride to the boards. $11 bucks and here we are, at the boards! 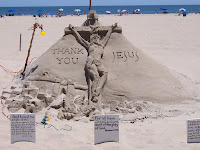 We had a great time walking the boards, eating at Tony's Pizza and admiring the works of art built in the sand. We rambled through some shops and Mary added a new charm for today's destination. We decided that the only charm suitable for 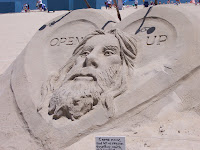 Tangier Island would have been a skull and cross bones. We decided to sit a spell and people watch near Ripley's believe it or not museum. Wow the sights you see....This one family was looking for their child 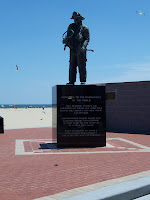 and the young girl came out of a store close by. Well I said to Mary she's done watch this and sure enough Mom grabbed her and gave her a good wack and told her if she wandered off 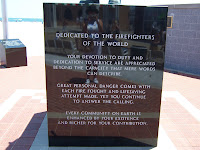 again she would get plenty more. She didn't hurt the kid but all I could do was laugh to myself. I could only think that she was so glad she found her that now she was going to "kill" her for wandering off. Ahhh... the memories of childhood.

Mary got a few shots of the Fireman's Memorial located on the boardwalk. The workmanship was perfect and what a sight it was. Each brick had a name of a fireman who lost his/her life in the line of duty. 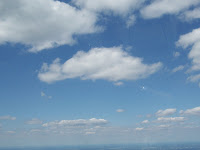 It was time to head back and make way for home. We called the taxi and sure enough in just a few minutes we were on our way. We had to sit a short while while the bridge opened for boat traffic. Once at the Terminal we got another ride in the golf cart back to 679er. We saw a super clean cardinal getting fuel and said hello, the gentleman commented on the wind. Yes, he was right it was really starting to kick. The trip home to KILG followed the blue portion of the above pictured flight plan.

We taxied to runway 32 and completed the "run up" while waiting for an aircraft to land. Down and clear of the active we moved into position and launched. Gusty winds but 679er kicked butt, the Archer II can really climb. I called Dover approach for the second time today this time heading north. With our squawk dialed in we were cruising at 3,500 as directed. Approaching Dover we heard traffic going every which way. We had an Archer headed to Lancaster KLNS and a Cessna headed to OXB heading south. This was a bumpy ride home today as I had to work at holding altitude. I was jumping plus or minus 300 feet what seemed like all the way 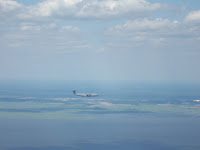 up the Delaware side of the bay. I watch as a C5 gets ready to take off and the thought crosses my mind that if he turns right traffic which I know he will over the bay that we are going to get real friendly real fast. Sure enough he launches and before he turns the Cessna pilot makes this hilarious call. "um, Dover approach...there is this really big plane coming right at me, I'm ok here?" I about wet myself laughing. The controller reassures the Cessna pilot he is safe and the 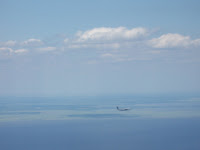 "heavy has a visual". Well it gets better, the controller advises ME that the really big plane will be right traffic and pass by me at 3,000 caution wake turbulence. I could not help it...I keyed the mic laughing and said I have the "reeeeally big plane in sight" and confirm the right traffic, and will give the C5 plenty of room. Not long after the fun we were cut loose. I thanked the controller for his help and for the up close look at the C-5.

With the Wilmington ATIS noted I flipped to 126.00 and advised the towwer of my intentions. I was told to report a 1 mile final for 32. METAR for KILG 221951Z AUTO 30018G23KT 10SM SCT075 26/07 A2987. Landing checks completed I make a nice landing at ILG and as directed turn right on 9-27 followed by a left on Kilo 5. Safe and secure we pack up and head home. happy with our day together flying and spending time on the boardwalk but very disappointed about Tangier Island. Mary drove home which was fine with me. With 3.2 in the book I was thirsty and tired. The Rita's lemon water ice really did the trick on the way home.

Our next trip is scheduled for July with the North East Flyers as we all head to KMVY, Martha's Vineyard.
Posted by Gary at 4:17 PM