Sunday Mostly sunny. Hot and humid with highs in the low

90s. Southwest winds 5 to 10 mph. Heat index values up to 100. The wx-man told no lie today, it was hot, hazy and humid! Mary and I spent yesterday at her cousins wedding outdoors and it was just gorgeous, all day. Today on the other hand called for the three H's and what were we planning? A Flight to the beach! 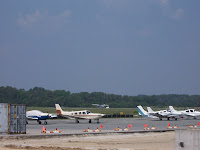 We departed Wilmington (KILG) around 9:30 local time or 1330 zulu time for you pilot folk and climbed into the haze. The plan was for 5,500 for the first leg, Wilmington to the ATR (Waterloo) VOR. The second leg I planned on descending to 3,500 from ATR to Ocean City, MD. The pattern was getting busy so I over flew OXB at midfield 1,800 feet (TPA 800') and repositioned for a 45* entry to 32 left down wind. I made an ok landing with only a short burst of stall horn, I need to work on that. We 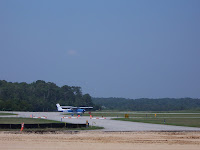 taxied off and locked up 679er then hooked up with the OXB staff for a shuttle ride to the terminal. Mary and I each downed a bottle of cold water and waited for fellow POA forum member Bob his wife Dru and baby Mackenzie. We also had the pleasure of meeting Bob's Mom Lin, she was a blast. Bob made a nice landing, very smooth and we got a few pictures of 09L as they taxied to parking. 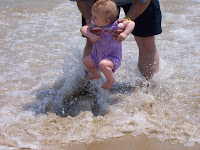 We all piled in a taxi van and made our way to the beach. The taxi dropped us at the usual spot "Tony's Pizza" and baby Mac went for her first dip in the Atlantic. What a lucky child to have such great parents and are they lucky to have such a good baby. The group then headed north on the boards

for lunch. We passed by a few places and ended up at "Shenanigans". This place had the fans going and the A/C turned on, it looked promising. The service was very good and the lunch equally as good. Full tummy's and plenty of fluids consumed we were feeling recharged, non-alcohol for the pilots of course. The 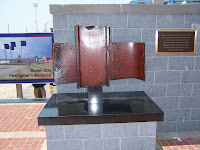 ladies hit some shops, Bob and I commented on the banner tow operations and we all worked on our tans. We hopped a ride on OC's version of the "tram car" and headed 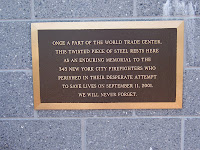 south to almost the end of the boards. In our travels we checked out the Fireman's Memorial and the 9/11 tribute, both very nicely done. We also passed a few works of art created in the sand, I took pictures our last trip and of course added to the collection this go round. We walked through the rides area 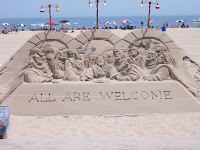 and all agreed to stop for some soft Ice cream or custard as some call it. I had banana which was a first,I had never seen banana soft ice cream. Tony's Pizza now in sight prompted a call for the taxi. Service was pretty fast, before you could get any shopping in, the driver was out opening up the back doors. Our group piled in, the stroller was secured in the back and we were off for the airport.

Bob and I checked the weather on DUATS, thankfully Bob knew 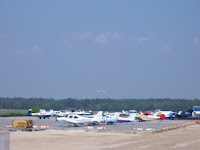 his user name and password. The Op's folks gave us a ride out to our aircraft and we said our good-byes. We each pre-flighted and then saddled up for home. Mary and I were off in 679er about ten minutes before our counterparts in 09L. Runup completed, I 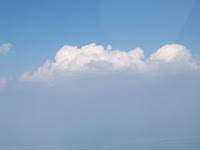 departed r/w 20 and climbed out over the ocean. Nice view on the cross wind and down wind of the beach and boardwalk. I made a call 5 miles north of OXB for Patuxent Approach but got a standby. A few minutes later I was given a squawk code for flight following and felt better with the extra eyes in this haze. I climbed to 6,500 through a large gap in the clouds and had a much better view now vs plugging along in the haze at 3000. I was turned over to Dover Approach and motored along requesting to descend to 4,500 to maintain VFR. A few minutes later I heard 09L request 4,500 or 6,500 from Dover and was granted the climb. I switched over to 122.75 and let Bob know I was "in it" at 6500 and was now good at 4500, he acknowledged. 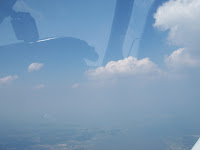 loose to squawk VFR but offered numbers for Philadelphia approach. We crossed the river and having "just" spotted the Salem nuke towers I then started a slow descent for ILG. Wilmington tower directed me to report a left base for r/w 27. I made out the Delaware Memorial twin spans barely and headed for a spot in the middle, between the airport and the bridges. That position always puts you on a nice left base for 27. I called out a three mile left base and was 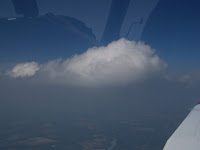 cleared to land. Nice and smooth on the way in about 60kts with stall horn letting me know I wasn't flat. A squeaker landing had us rolling out needing to add power just to make taxiway 'M'ike. As soon as we got out of 679er we heard an aircraft overhead, it was a Cessna doing pattern work. Two jets the landed, a Lear and then a Dassault Falcon 2000 (N1C). Mary alerted me to a high wing overhead and asked if it might be Bob and Dru in 09L. I checked it out but could not make out the blue stripes, although the underside of its tail looked blue. I guessed its altitude at about 3,000. We jumped around and waved like two nit-wits wondering if they saw us. Yes the heat was getting to us both! With 679er secure Mary took the keys and drove us home. We each gulped down another bottle of water as we unloaded my flight bag and the plants we left in the truck from yesterday. Maggie was happy to see us as she jumped around either from excitement or she really had to go, either way I let her out back. As I sat here starting to type the write up Bob called to let us know they were all home safe. A GREAT day with friends really made the trip worth it. I know the ladies were talking of a Williamsburg trip and a trip to midcoast Maine. I'm sure I will be posting a write up soon!