Forecast for Lancaster (KLNS).
Today Sunny. Not as warm. Less humid with highs in the mid 70s. Northwest winds 5 to 10 mph.
This morning Mary and I will be heading to Lancaster,PA. We are going to meet up with the North East Flyers group for lunch. This morning's weather report looks great so we should have a nice flight. METAR KILG 181451Z 34011KT 10SM CLR 22/06 A3019. This does not reflect the gusting winds as noted in the ATIS report. No matter, it was a smooth take off from runway 1 with a left turn out to our north west destination. Winds aloft as noted by St. Petersburg, yes, St. Petersburg, Fl was for 36 knts. Williamsport FSS is now closed and I was directed to call 1-800-wx-brief which dumped me to Florida. Somehow this does not give me the warm and fuzzies.
I picked up flight following with Harrisburg Approach about 8 miles west of KMQS (the old 40N) Chester County. I received my squawk code and dialed it in, fllowed by my readback to approach. A few minutes go by with no radar contact. Great, the transponder is acting up again. I call approach to confirm and he asks for me to Ident. No problem, they have me and confirm our location. I report a 4 mile final for runway 31 and then advise crossing the four lane highway as directed. A smooth landing with stall horn moaning just a tad left of center. We roll out and taxi to parking on the west ramp 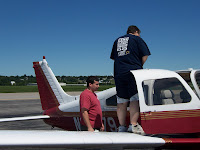 We waited for the others to arrive and they indeed trickled in with most folks running 30 minutes behind schedule. We had a nice lunch and had some good airplane chat. Mary had the chicken cranberry salad and I had the buffalo chicken salad, hold the buffalo. I don't care much for the hot sauce. Service was good as usual and the 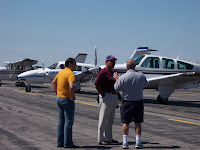 place seemed pretty busy. The waitress asked how all the pilots know about the restaurant. I told her word of mouth mostly and then explained about airnav.com and the ability to leave feedback on the FBO's (which she understood) and places to eat. 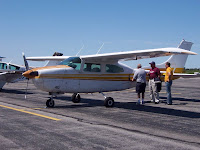 We walked out to the flight line and saddled up for home. I watched as Bob passed overhead in his R44 Helicopter and I followed Ed in his Cessna Centurion out to 31 for departure. Mary and I decided to fly right home passing up the shopping at the outlets and a stop at Smoketown. 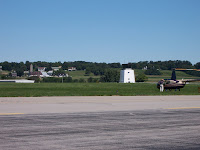 I contacted Wilmington Tower 15 out to the North West and was directed to enter a left down wind for 32. Traffic departed from New Garden (N57) and was headed to KILG also. I had a visual on the lark and Wilmington directed me to follow him in #2. AS I slowed and fell in line we were both given the option for runway 27. I accepted the change and positioned for a right down wind entry. As I was about to turn down wind I watched an aircraft depart 32. I had contact on him the whole time acknowledged with the tower and as he climbed out and passed by me I started my turn to down wind. He made a call to Wilmington asking about the aircraft off his left side not talking to anyone. Hellooooo.....are you not listening??? Wilmington blasted back that I had visual on him and I was in contact. KILG 181751Z 33010G16KT 10SM CLR 24/07 A3019
Another smooth landing on 27 followed with a taxi to Red Eagle. Mary and I secure 679er and head for home. A fun day, even though it was a short trip.
Posted by Gary at 6:50 AM