Mary and I got on the road around 10:45 making a quick stop at Dunkin Donuts for a bagel and cold drink. I needed to take my pain meds and they required something in the tummy. I-95 was moving along at a good clip and the Blue Route, I-476 even better. I was the navigator for this run, a different experience for me, normally the left seater. Mary parked the SUV in front of the KLOM - Wings Terminal and handed me my crutches so I could climb out. I am able to get out ok if I take it slow but I still need some help getting in the truck. Maybe I could climb in better if I was on the "drivers" side....The Bride just gives me the look, enough said.

trickled in starting around noon and numbered around 40. Adam Z organized another great event and with the help of the usual suspects put together another fun filled shindig. Gary S coordinated efforts while Andrew S had the smoker grills doing their thing. Rob S was loaded for bear as he clicked off pictures and had a backpack full of photo goodies, this years unofficial, official photographer along with Matt teller.

Hmmmm...the smell of smokin' charcoal and BBQ was in the air! This was the first year we attended but didn't help, it felt odd. Despite the crutches I was in heaven, plenty of airplanes, good friends and good food. Gary S and I sat and c

hatted, such a nice man. Mary and I both agreed he kept an extra eye on my whereabouts making sure I was safe and comfortable, it did not go unnoticed. Thanks Gary, your concern provided Mary an extra comfort factor for the day and I appreciate that.

As always it was great to catch up with the rest of the Wings bunch. Time flew by as I sat and chatted with Rob, Bob and Mackenzie, Shane and Beth, Dave, Ted and Andrew, when he 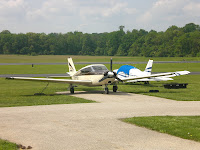 returned from picking up Missa in Williamsport (KIPT). I finally got to meet Teller (Matt) from the POA forum and it was great to catch up with Adam and Marisol, Kent, Ed (and his recent Comanche purchase), Grant and Leslie, Tony, Lee and the list goes on. The original plan was to only stay for an hour or two at the most but we managed to hang out until 4pm. It's not easy dragging the little boy away from the airport or the airplanes!

Smithfield, once again, provided all the meat one could eat and with Andy at the controls it was cooked to perfection.

There was pulled pork, hot dogs, hamburgers, chips, cookies, coleslaw, sodas and water to feed the group. Prizes were handed out for the furthest traveled by General Aviation (Grant & Leslie), furthest traveled commercial (Tony C) with a long layover in Atlanta. Ed won an award too, but I didn't hear it since we were still laughing about the most recent grass cutting joke award......that would have went to Missa.

All in all a great day! Mary and I got to see our friends and we both realize just how much we both really miss flying. Once the wx lifted some of the group was giving rides. If only they could have got me into one of those planes, oh well, I'll be back flying soon, I hope. Rob fired up the Diamond and had a 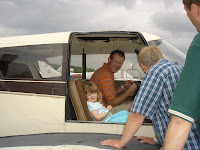 few passengers and Ted had the Mooney doing laps around the pattern, Ed gave rides in his Comanche also. I can't forget to mention that Wings discounted fuel for the event and were gracious hosts for the annual gathering.

Mary and I already have next

years Fly B Q penciled in on the calendar, third weekend in May. A fun event with the chance to catch up with friends from across the country. Did I mention how much I love this flying stuff?

Pictures provided by Rob Schaffer. The guy in the shades!