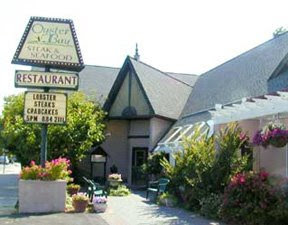 I asked my Bride if she would like to have dinner at the Oyster Bay restaurant in Cape May, NJ. She thought about it, for maybe 3 seconds and said it's a great idea. We made plans to shower and change around 2pm, head to the airport by 3pm and be wheels up around 3:30. Mary spent the day working on her sun tan in the back yard while I watched the replay of the Phillies game last night. I also putzed around on the computer for awhile. I scheduled 679er from 3-8pm and set my flight, garmin and Marys headset bag near the front door. I also grabbed the camera, but forgot to charge it.

It was a great day to fly with a nice breeze to cool things off. We uncovered, I took on 21 gallons of 100 LL and climbed aboard when the fuel check was completed. The Archer started 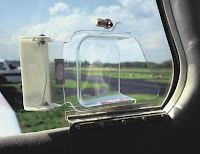 up an everything looked good to go with cool air from the big fan rushing in the kool scoop window and cabin door. I contacted Wilmington ground and advised ready to taxi, VFR departure south east to Cape May, Whiskey Whiskey Delta with information Hotel. Same response as always, taxi to runway one niner via Kilo, hold short contact tower when ready to go. I acknowledged all commands and released the brakes.

679er was off in short order climbing to the south. At 700 feet I made my previously approved on course left turn to one five zero degrees and leveled off at 3,500.It was typical north east haze but I have seen worse, at least the cooling tower was easier to see today. I tuned in Dover approach and listened in but did not call for flight

following. I like to switch to Millville Radio in order to keep tabs on traffic. Once clear of MIV I flip to 122.7 cape may CTAF. This frequency is shared with Chester County, queen City and a at least two other airports, what a pain in the ear. It was good to have the Zaon PCAS on board today, it picked up two targets. An aircraft was passing overhead about 1500 high and it tracked him solid and I did get a visual on him and the other was 500 feet below and never saw him. I think he went into one of the many grass strips between the Delaware river and Millville.

There was a Cessna 150 departing Cape May a 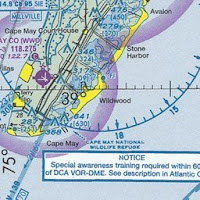 nd we traded calls to locate each other. I was five miles out when I heard him depart and never did see him. When I announced short final for runway one zero a young lady stumbled through her calls but got her point across as she announced her position. She was following us in to WWD and was entering the down wind as we touched down. I did notice today that the stall horn did not work and I had once again rode a nice landing, setting the nose wheel down well after the mains. I made the first right hand turn off and found a parking spot up front at Big Sky, the FBO.
Mary and I walked in and asked for our rental, it was ready and waiting. The man working the counter said it's the small red one. Oh my, I took the compact but now I was worried. As we walked out to the lot I said to Mary he wasn't kidding, it must be small, I can't even see it! It was parked out of our

view but we finally walked up to the toy car. The chariot for tonight's date was a red Chevy Aveo. The Archer had bigger tires! It started up and we piled in, it actually was pretty roomy up front. It was all plastic and it made some funny sound, it must have been the rubber band unwinding. The toy car got us to Oyster Bay in great time and we were the first couple to walk through the door. We had a nice cozy corner seat by the fireplace and a very good view of the entire room.

After going over the menu's I decided on the shrimp cocktail for starters. Mary had the special salad with mozzarella cheese with prosciutto, peppers and balsamic dressing. We both ordered the house special, surf and turf. 8oz fillet cooked to perfection with a half lobster stuffed with crab

meat a side of mashed potatoes and green beans. Mary passed on the potatoes. The food and service was excellent!!

We finished up diner and very briefly gave dessert a thought. We decided to order two slices of a mousse cheesecake with the bananas foster packaged on the side, both to go. Like two little kids we carried off our treasure and made for the hot rod, um, I mean the toy car. The key did work and it even started again, I didn't even think to rewind the rubber band. I shouldn't complain, the rentals from Ace Sharper have always been good for us and the rate for the wind up car was only $29.99 plus tax. Traffic was light as we made our way back to the airport, enjoying the sites along the way.

Mary and I walked out to the plane and loaded up our special treats. I did a walk around and checked my fuel status then climbed into the left seat. Mary followed and we soon had 679er ready to taxi. I watched one plane land and another take off as I completed my run up. We were next up and rolled on to runway one zero and advanced the throttles for takeoff. I climbed out and held off on my turn north giving some added space for the neighbors below. I was tracking the DuPont VOR on a 330 degree TO heading. The Garmin 496 was programed and I decided to dial in the direct to on the panel mounted Grmin 300XL. Something didn't add up, the 300XL kept showing me a 152 degree heading to Wilmington but it was 180 degrees off. It also showed a dotted line for my course instead of the solid line. I thought maybe a satellite problem but my G496 was going strong with weather and traffic running. I recycled the 300XL and it came up the same way. Not sure what that was about but I'll check the manual tomorrow.

It was fairly smooth going home and Mary was soon fast asleep, I didn't even get to flip the switch to isolate. I teased her and said she had puppy syndrome, full tummy must take nap. I continued on and once again gave the 300XL another chance to provide good info, this time around it was perfect. I was already tracking the DuPont (DQO VOR) anyway but it's always nice to have a second or third backup. I

widened the view on the Garmin 496 and saw shower activity moving into Lancaster, PA (KLNS). I didn't think we had any worries and continued on enjoying what we could see of the upcoming sunset. Winds had slowed down from the first ATIS check to the most recent now reporting winds 170* at 3 knts. After announcing my position the tower advised I had the option to enter a right base for runway one or left down wind for one niner. I took the slight tail wind and advised I would be entering the right base for one and landing long for Red Eagle, the tower acknowledged.
We were home.....what a nice trip! The opportunity a plane provides is endless, seriously, what a great date night. As a side note I should mention that the average drive time for this night out would have been two hours each direction with no traffic. Our average in the air time, each direction, was 28 minutes and maybe a ten minute drive to/from the restaurant and airport.

Date night with my Bride...PRICELESS!!