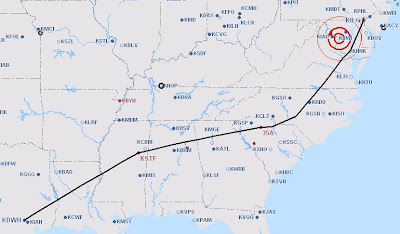 One of my pilot friends is in the process of purchasing a 1979 Piper Archer II, sound familiar? Well, it sort of is. I fly a 79 Archer II also but this Archer is in Texas and is loaded with a great avionics stack of goodies. Ok, let me back up here and fill in the details of the story.
Jeff and I met through flying and we have safety piloted for each other on a few occasions, we also attend North East Flyer events. Our first real trip together was our flight to the aviation mecca, First Flight in North Carolina. What a plan that was with the family members getting sick, going from a two plane flight to one plane and me driving to meet up and fly with Jeff.
August of 2008. Jeff went to the airport to cut the grass around his aircraft only to find out the airport maintenance folks already cut it. They also dinged his plane in a few places bad enough to warrant repairs and did not report it. His annual now had added repair work that needed to be done. Jeff and the airport did work out the details. Read his post here.
March 2009. Jeff headed out to the airport this day only to find there was an accident involving a rented Piper Warrior that had crashed into two planes, Jeff's Cherokee 180 and a Cessna 337 Skymaster. News report and NTSB report.
Ok Fast forward back to present day. Jeff was interested in joining the club I belong to but the last slot was filled a week or so prior. The new member was in on a two month trial basis and was not sure he was going to stay on. Jeff was next in line to fill the spot. Well, two months have gone by and Jeff was really needing to get in the air. He and his family vacationed and while away he completed his BFR. When he returned from vacation he swapped some emails with the club owner only to find there was no status change. There was however some talk about a possible sale. This talk got the ball rolling and Jeff resumed his search for a late 70's early 80's Archer. Every pilot scans the trade a plane ad's and every other service online that lists aircraft for sale, it's what we do. Hey were pilots, we dream big, what can I say.
After trading phone calls and looking over links to various aircraft Jeff calls to tell me he his pulling the trigger on a 79 Archer II located in Texas. This aircraft has the latest avionics which makes it a rock solid Instrument Flight Rules (IFR)bird. The wheels start to turn, Jeff makes the appropriate calls. Of course I wanted to be the first to offer to right seat for him if he needs to make a road trip. I'm covering the bases here, I can hear it in his voice this is going to happen. His plan was to fly down with a CFI but I assume the timing didn't work out. This opened up a chance for me to make the trip.

I'm excited to say the least! I called Mary and asked her what our plans were for the weekend and she said it was open. I updated her on Jeff's purchase and let her know I had the chance to fly with him, she said you boys go have fun. So far we have our one way tickets to Houston in hand and we will be leaving Thursday morning bright and early at 7:35AM. We talked about a potential route home and stops along the way, neither of us wanting to really fly at night since we have four days available for return. The flight plans for nine or ten hours depending on the winds aloft. Initially we plan to spend Thursday night in Starkville, Mississippi then fly home on Friday, everything weather dependent of course.
I asked Mary if she wanted the link to track our progress home if our flight gets posted on Flight Aware and she said no, just call in. That works for me, I'll keep her updated.
Posted by Gary at 5:29 AM

This is going to be an awesome adventure - be sure you take lots of photos and video to share when you get back home!

Sucks to hear of everything your friend went thru as well. Lawn mowers, planes crashing... sheesh!

Yeah, should be a fun couple of days.....camera and video is charged and ready to be packed! I can't wait to get started.