MikeB sent me an email around 4:30 and I didn't check my email until 6:00. I replied that I was a go for flying tonight, give me a call. The house phone rang and Mike asked what my new cell phone number was, it was not the one I sent out in the email. I must have brain farted and transposed the last four. We got that squared away and I resent my original email noting the brain gas bubble. 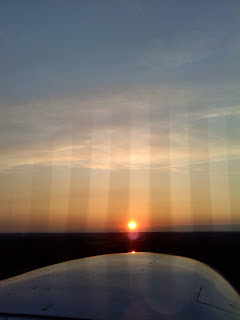 We both headed to the airport as soon as we hung up and planned for a local flight to shoot a few approaches. 25U was brought out to the ramp and we loaded our flight gear, pre-flighted and hooked up the G496. We both wanted the wx on board with so many local favorite airports showing marginal vfr and IFR conditions. The clear area for flight seemed to stretch to Lancaster, PA and as far south as Dover, DE. The favorite stops along the Jersey shore were IFR so we decided to stay in our own backyard for some fun.

We launched off runway three two and climbed out into a very nice looking sunset. I did get one picture tonight, although I once again forgot the camera, I did have my cell phone. I handled the communications for the flight and Mike went under the hood so I could vector him for the ILS 29 at KMQS, 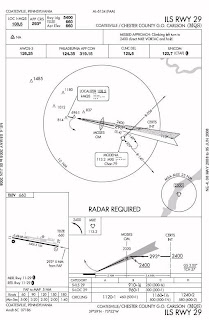 Chester County. Once we left the Wilmington Delta airspace we dialed in Chester County to monitor traffic. I vectored Mike to a final heading of 330 degrees, maintain two thousand four hundred until established for ILS 29 Chester County. We role played ATC and that really helps me as an instrument student get comfortable with the proper radio calls. Mike calls out what he is doing when shooting the approach and I follow along while looking and listening for traffic. We had a Cirrus inbound five miles east for the ILS 29 approach. I did not see him and we were closing in from the Modena VOR (MXE). I advised were were going to do a 360* turn and re-nter for the approach in order to give the cirrus room. The cirrus next reported EFECO inbound which is five miles, his first position report was incorrect, he was more like /nine or ten out to the east over the CERTS intersection. Oh well, we continue inbound. Mike calls localizer alive and turns on final, tracking very smooth. As we now approach EFECO the Glide slope is alive and mike intercepts. I know it's bizarre but I always here "down the stretch they come" in my head once on the needles, my way of keeping my head in the game and stepping up my focus.

Mike goes missed as we exchange position reports with the Cirrus. It's great when everyone talks, a lesson for Millville radio on how airport communications can work. Next up I take control for the same approach. Mike role plays as ATC vectoring me back to get me in position for the same ILS approach. I felt pretty steady once I got the hang of 25U when turning and she needs a bit of foot to the left rudder to keep squared away. I did pretty good until short final getting a bit heavy handed with aileron control, feet feet feet, soft rudder corrections only. I end up going missed and once turned out towards the Modena (MXE VOR) command is transferred back to Mike. We role play ATC again and Mike ends this approach as a full stop. We pass on making a food stop even though Mike hasn't had dinner, I ate before I walked out the door.

We taxied out to runway two niner for a south departure back to Wilmington. We scared off a fox that was running along the taxi lights even though it hung in there contemplating make a dash across in front of us. I made the call that 25U was 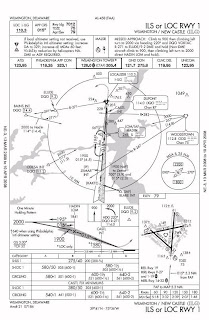 departing two nine Chester county as me rolled into position. The landing lights lit up a small heard of deer maybe 6-8 just off the approach. Mike reconfigured for a short field just in case any Bambi type critters wandered out across the runway upwind of our position. We jumped into the air in short order, man that Cessna gets off quick.

As we climbed out a Mooney announced his position south of the field maybe five or six miles I can't remember and he was heading north bound at 2000 feet. We were climbing through 1,600 for 2,500 heading to the south so I announced our position as well. I ended up spotting the Mooney at our two o'clock maybe 500 feet below as a dark streak across the sky. When I called the Mooney in site I noticed his strobes lit up. I couldn't spot that one again if I tried.

Mike transferred control back to yours truly for the ILS 1 approach for Wilmington. Mike was working communications, I was eyes inside on the instruments. Contact with Philly approach had us squawking and talking. I followed the vectors for the ILS and did a pretty good job from the right seat. Philly turned us in a bit tight with the last vector and advised maintain at or above 2000, join the ILS 1. I hope Mike jumps in here to correct me because I can't remember exactly what they said but it wasn't the norm.

Mike thanks for the email getting me squared away. I try to be exact, it helps me and others who read along. Here is what Mike sent me...ATC "join the localizer", a common phrase to do just that. Fly last given heading 040 degrees (and altitude) to intercept and track the localizer inbound (15*), from there expect to be cleared for the approach. Joining the localizer does not consititue being cleared for the approach, which came afterwards,25U cleared ILS maintain 2000 till established blah blah, when we get close to FAF, the hand off to tower comes. Contact Tower one two six point zero which I like to say 26 even, appreciate the help/practice 25U. I then flip flop on the coms and make the call; Wilmington tower Ces 3525U with you on the ILS, full stop (full stop - only needed in practice - real world you are not going back for another. If you did that would be, 25U is going missed (a required comm report). There are 6-7 required reports - a good oral question.

Once established Philly did turn us over to the Wilmington tower. As previously agreed Mike took over on short final and when I did look up I had us on the money looking down the runway. I made gentle corrections with the feet and it went much better. We buttoned up 25U and each headed home, I hope Mike got some dinner.