Another great night to be flying. MikeB called and we hooked up for an evening flight to shoot a few approaches, do some tracking and even toss in a miss with a hold procedure. Mike decided on Millville Airport and of course I gave the Millville radio painful sigh. We both laughed but stayed with the plan. I noted the ATIS at KILG for our pre-flight start up and once the fan was turning we set up our com/nav's. A quick call to ground, who seemed to be having a rough go with traffic this evening,

and we were cleared to taxi to runway one via taxiway Foxtrot and hold short. As we were getting underway a helicopter air taxied by and landed across from us, sure gald we were inside and not out there eating all that cut grass and dust. Mike completed our run up and advised we were ready to go. I called the tower and we were given a "hold short". There was an Army Guard Blackhawk inbound, a Cessna something or other departing and then silence, I thought he forgot about us. I was wrong and he did clear us to take off on one, right turn out approved. Mike and I both called out the traffic that had departed ahead of us and we turned on course heading over the Delaware River. I did remember the camera so I have a few pictures to post. The picture of the grass strip is New Jersey. It's slightly out of focus but there is a yellow bi-plane parked there. 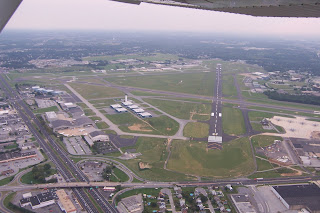 The only wx I could find on the Garmin 496 was located out to our west south west around Baltimore. We kept on track for Millville and noted their AWOS also switching to the Common Traffic Advisory Frequency (CTAF) on 123.65. I kidded with Mike and said listen to this call to Millville Radio, I know it's now a game with me to see how little air time they can take up. Millville Radio Cessna 3525 Uniform, ten north west, with traffic and wx information, 2,500 will shoot the practice ILS RWY 10 approach. Millville responded, "advise LADIE inbound". Wow it worked! We did have traffic in the immediate area so I was really scanning while Mike was under the hood. We both wish we had the Zaon Portable Collision 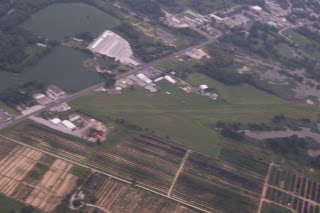 Avoidance System (PCAS) working but we had no external power in the cockpit that we could get to work.

Mike made the procedure turn as called for and we were headed inbound. I made the call to alert Millville traffic/radio we were LADIE inbound and worked communication with the Archer also shooting the approach coming from the Rainbow NDB. I should add here that I made a point to also state my position for VFR traffic that we were on a 5 mile final runway one zero. As a VFR pilot (for now) I know what it's like to be in the pattern and pilots call out rainbow or LADIE inbound.....where the heck is that I think to myself. So the IFR guys should give some extra info to let the VFR guys know where they are coming from. I will say with all the instrument training I've been through I can hear certain intersections or NDB's and know where to look, same goes for those out of the way published miss points. It all helps with situational awareness to know where you fly or where you intend on flying to.

I was literally head on a swivel looking into the evening sky and north east haze for the other aircraft, I never had visual contact with the Archer. Mike was rock solid down the ILS approach. I know I've said it before but he calls out everything he is doing and I get to learn from that, every little bit helps. We cross the missed approach point (MAP)and of course, go missed. Out to Cedar Lake VOR for a lap around the hold then inbound towards Rainbow. We break off from that approach and we role play ATC with me giving vectors back to the ILS RWY 10 at Millville. Mike did fine and I tried to keep the vectors to intercept as ATC would. The localizer came alive and we were tracking inbound. Glideslope was rock solid and I watched the Pappi lights glow with the correct pattern for the glideslope. This would be another missed but we would be heading back towards Wilmington.

As we were heading back Mike thought about shooting an approach at Smmit (KEVY). As we approached the the Salem power plant and all its bright lights Wilmingtons ATIS was reporting Broken at 3'200. We figured on just shooting an approach back into Wilmington instead. The winds did start to pick up and there was a layer moving in over the river. I called the tower and advised our position and intentions with the correct ATIS noted. The tower gave us a straight in for runway one and I responded with a request for one four. Not a problem as ATC instructed us to enter a right down wind for one four. Mike gave me the nudge...."hey report mid field downwind" and I did. I was busy watching all the lights from traffic on I-95. Mike squared up the pattern and took us in for a nice landing and roll out. We exited the runway and taxied back to Atlantic.

Next up some time in the Archer with Mike as my safety pilot. I hope to finish up with CFII Chuck sometime soon. Mary and I also have our trip to Stonington, Maine scheduled. It should be a fun few months of flying.

GPS FLIGHT TRACK
Posted by Gary at 8:32 AM

Hey nice blog! You should stop by N14 (flying W) it's about 50 nm NNE of Millville and we'll go flying.

next time I'd like to come along and shoot night approaches!

GP....I was only safety pilot, it wasn't my plane this trip. The Archer II that I fly is in Ocracoke, NC this weekend.....it stinks I'm not there with it!