I headed to the airport early so I could clean any oil residue off 08Romeo's belly. I have annual coming up the second week in November and wanted to make sure I didn't have to deal with working on a dirty plane. I traded some text messages with Mike B on Friday about flying and the wx is looking great. The only concern is the Presidents TFR in Philly airspace.  Wilmington falls in the outer or 30 mile ring. Wilmington falls under the following Operating Restriction.
B. For operations within the airspace between the 10 nmr and 30 nmr area(s) listed above, known as the outer ring(s): All aircraft operating within the outer ring(s) listed above are limited to aircraft arriving or departing local airfields, and workload permitting, ATC may authorize transit operations. Aircraft may not loiter. All aircraft must be on an active IFR or VFR flight plan with a discrete code assigned by an air traffic control (ATC) facility. Aircraft must be squawking the discrete code prior to departure and at all times while in the TFR and must remain in two-way radio communications with ATC.

All aircraft must be on an active IFR or VFR flight plan with a discrete code assigned by an air traffic control (ATC) facility. Seems pretty simple yet some people don't get it.  While I was pre-flighting a man came over to ask me if I was doing pattern work,no introduction just a question.  I said my name and asked why. He tried to explain the TFR but clearly did not understand it or check for it before driving to the airport. I explained the inner and outter ring requirements and the time restraints associated with each. What he didn't get is why it reaches to KILG if it's based on the Woodstown VOR.  What? The rings location is defined by the VOR as in the example of Mondays TFR over ILG for our VP.

At least he wasn't going to fly today and that was a plus, good thing Wilmington has a tower to provide control, at least in this case.

Mike arrived and did his own pre-flight as he gets accustomed to the Sundowner. Mike was flying and I was working radios today. I was going to use only the iPAD today but by the time I copied the clearance the screen was full. I had to erase it to continue and I rather have that info on hand at all times. I instantly went back to the knee board and paper. The normal route to KESN is Radar vectors to V29 ENO Direct ESN. With the TFR today we got the long way around via Baltimore.


Ok, we are launching off runway two seven and climbing to 2,000. Handed over to Philly Approach and cleared to climb to 3,000 then 4,000.  Handed off to Potomac and a good controller for our ride. We got a short cut and turned south early along with another hand off to another Potomac sector. This controller was not quite up to speed as the first young lady. While his Michael Clarke Duncan like voice commanded respect he was a bit scattered with directions. Mike and I worked on some CRM skills with the radio and GPS which really makes the workload flow. This will be very helpful when in IMC. 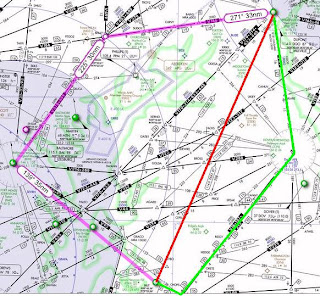 The magenta course line is the route assigned, the red would have been a direct flight and the green is the typical route for this flight. Mike set up for the RNAV (GPS) RWY 22 approach into Easton. We had traffic pass close by to us that the potomac controller never advised us of, great job, NOT.  I advised the Easton tower of the traffic that was clearly in their airspace and not talking or obviously squawking.  The one traffic call out from the tower was an aircraft on the right downwind number two to land after us. Mike made a real nice landing with a taxi back to the terminal.
Easton does have a restaurant open again! Sugar Buns bake shop from St. Michaels re-opened the restaurant at the terminal. The food and service were very good. I had the Lobster roll and it was perfect! What could be better than a touch of New England lobster roll downed with a splash of southern sweet tea....life is good. 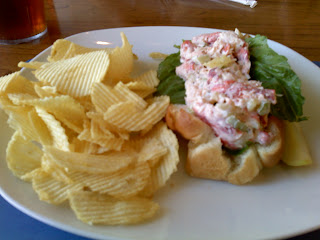 ﻿Mike and I decided to make the short hop to Georgetown, Sussex County (KGED) so we could head into town and check things out.  Actually we were on a mission for 2nd street bakery sticky buns. We didn't file for this hop instead took advantage f the perfect day and enjoyed the flight. We swapped info with an aircraft shooting the GPS 22, planing on going missed so we entered on a left down wind.  We taxied in after a super smooth landing by Mike and arranged for the crew car.
With the mission accomplished we saddled up for home. I was going to fly from the right seat on the way home and attempt my first landing from the right side also.  My on center taxi skills needed some work but I worked that out as I positioned myself for the run up. I launched for home climbing out steady and updating my 'direct to' for KILG. Mike commented that I fly better from the right then the left...not sure if that's a good thing or not. The winds had picked up at Wilmington (210@11with gusts)as I turned base to final and I asked Mike to be ready hands on just in case. My landing was going ok then got kind of squirrely as I side loaded pretty good. I made taxi way M and headed into red eagle, even my parking alignment was off when I shut down.
A fun day flying and adding new layers to my skill set.  I'll need more right seat landings to even consider myself proficient.
Posted by Gary at 11:56 AM