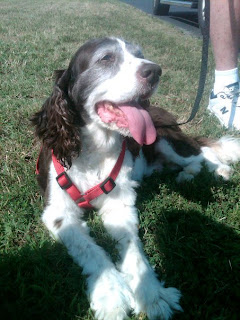 I had followed a few posts criss-crosing the Mid-Atlantic English Springer Spaniel Rescue (MAESSR) email system this past week.  I thought maybe if the wx was looking good and Mary and I could get back home by 3pm we could fill this mission request.  Friday wx checks looked like there was a very good chance we could get this done, now to fit us in the schedule.  I connected with Adam and Renee and they coordinated to have Sadie at Dinwiddie Airport in Petersburg VA between 9 and 9:30am.  The last piece of the puzzle was to have Maggie, Sadie's new Mom, meet us around 10:30 at KESN, Easton MD.  The plan is hatched! 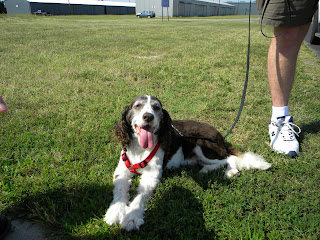 Mary and I got up early and headed to the airport after taking care of Maggie, our Italian Mastiff.  We agreed on a Dunkin Donut stop for water and  flat bread breakfast sandwiches. We arrived at the plane and went through our well rehearsed routine. By the time Mary was headed out the gate I was mid pre-flight.  We also had to pull the two backseats and get the moving blanket in place for our passenger. 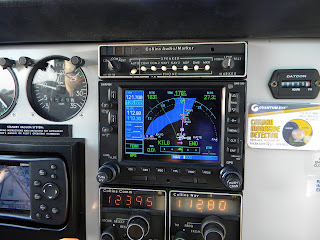 I got 08Romeo started so we could get some air moving and turned on the high power blower to help circulate air in the cabin. I had filed a flight plan last night for 7am and called ground to pick up my clearance. Using the CRAFT mnemonic I jotted down what was read to me.  Cleared PTB, Runway heading, Radar Vectors to intercept V29, Smyrna (ENO), V16, Patuxent (PXT), As Filed. Great! I had already chugged and plugged that route in the Garmin 530, we were ready to roll. I was cleared to taxi with my take off clearance given as soon as I finished my run up.

The air was smooth as we made our way south despite fighting a fifteen knot headwind punctuated by a thirteen degree crab for the entire leg one. Philly cleared us to six thousand and eventually handed us off to Potomac, Patuxent then Potomac two more times. Potomac cleared me for the GPS 23 approach and I made the changes to the 530 and made my way in. There was one plane in the pattern at the time so we followed number two to land. I didn't know it at the time but it was David in Cessna 18November Sierra.﻿﻿﻿﻿﻿ 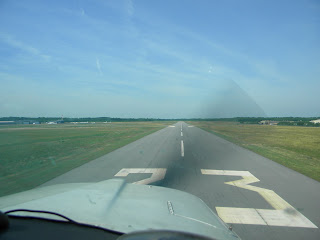 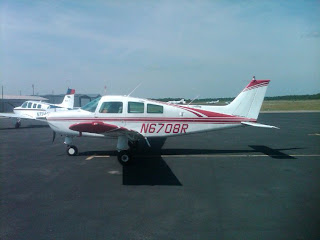 I made an ok landing and let 08Romeo roll out, I always try to save brakes. We taxied to the ramp and there was our passenger waiting. Carl, what a gem, made the trip from Henderson NC to have Sadie at the airport ready for us to pick up. Thanks Carl! Your extra effort was appreciated and it will help us make our commitment at home this afternoon.

I needed to top off on fuel and the price was cheaper here than at ESN so I went to the slots plus five on each side.  That combination gives me 50 gallons and will leave almost thirty in the tanks when this mission is completed. David B was on the ramp and it was nice to finally put a face to a forum member and facebook friend.
With the fuel bill squared away it was time to saddle up and get this cute little girl to her new home. Mary and I said our goodbyes and climbed aboard. Again, special thanks to Carl for his trip north to have Sadie there and thanks to David for taking time out of his day to meet up.
I got 08Romeo started and attempted to make contact with Potomac on the Ground communication outlet (GCO) but had no luck. Thanks to the zulu headset I used the blue tooth and called Potomac to pick up my clearance north. This one was easy, cleared to ESN, As Filed.  Life is good! Maybe it was the comments "Dog rescue flight". 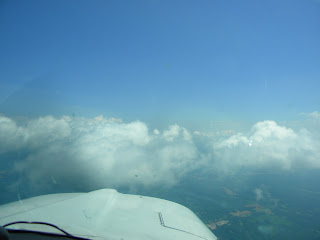 We were off and heading north for Easton, MD.  Our first ATC asked if I had canceled when we had landed....UGgghhhh....I had not, and confessed. ATC was very nice and just said it's a reminder, no harm, there was no inbound IFR traffic. So noted and I won't let that happen again. Potomac cleared us to five thousand direct TAPPA and that saved some flight time. At least we were enjoying a nice tailwind cruising along now in the 125 knot range. 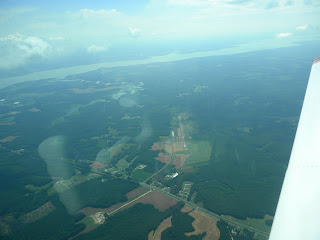 Sadie settled in and eventually fell asleep, Mary even took another nap. We skimmed along the cloud tops and were in and out for a few minutes until we got close to the Chesapeake Bay. From the Bay to Easton was smooth sailing with a few clouds placed here and there. I was handed off to Patuxent and cleared for the visual approach runway three three.  As we got closer we had a traffic call out in front of us that we could not see. Eventually that traffic also headed into Easton, we were number two.  The spacing got close and I tried some 'S' turns but that didn't cut it.  I requested a right 360 and that was granted which worked out fine for spacing.
We taxied in and saw Maggie, Sadie's new Mom waiting on the ramp. Jeff D our friend from Woodbine flew to ESN for lunch so we could also meet up, I didn't know he was going to be there. Jeff made contact with Maggie and together they were waiting on us, thanks Jeff that was very nice to keep Maggie company. Our sleepy little girl had awakened from her slumber and was looking for her exit from the plane.  Such a sweetie, she never forced going by the front seats instead she patiently waited and let me lift her up and help her exit the baggage door. No sooner that little girl was on the ramp her tail was wagging!
Maggie was excited and so was Sadie, lots of positive vibes here. Sadie's tail was going a mile a minute and she was checking out some folks sitting in the terminal as if showing off her new Mom. Mary and walked out to make sure she got in Maggie's car ok then parted after good hugs all around. Both Maggie and Sadie looked happy, we wish them the best!!! 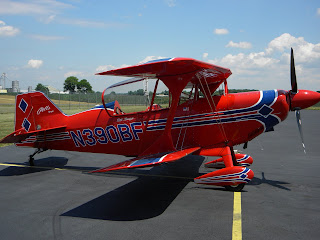 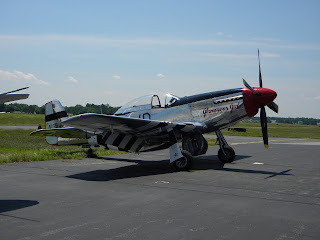 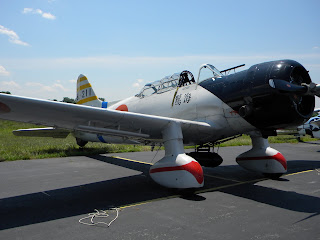 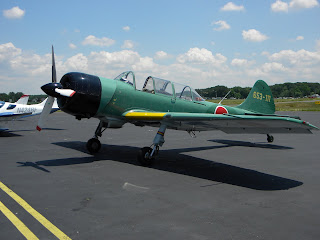 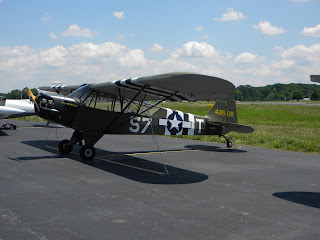 Our mission completed we decided to grab a quick lunch at the Sugar Buns restaurant in the terminal.  We each had and iced tea and lobster roll, it was very good. Jeff sat and chatted with us for a bit then saddled up for home. His Mooney was blinding as it taxied by the restaurant, who cleans that plane so nice?? Mary and I settled up the bill and headed out to take a look at the war birds that were gathering on the ramp, a special treat.
I opted not to file since the VP's TFR didn't start until later this evening and instead decided on a VFR flight, I didn't even pick up flight following.  I did have Dover approach tuned in and listened for traffic but it was nice just to sing along with the country hits and enjoy the view. I made the call to Wilmington as we passed over Summit, KEVY. With the wx info noted, I gave my position, stated intentions and was directed for a left base runway three two.  That didn't last long and I was changed to downwind two seven. uneventful landing and taxi back to Red Eagle. Our day is done, we put the heat shields in the windows and I promised to return tomorrow to give 08Romeo a bath and reinstall the seats.  For now, time to head home, download some pictures and work on this write up.  We have a graduation party starting at 5pm that should make for a nice ending to our day.

THANKS to everyone at MAESSR that made this happen!!
Posted by Gary at 2:51 PM

What a great day! I should really look into doing some of these types of flights. Looks like you shared the ramp with some pretty nice aircraft, too!

Glad to finally have a chance to read this post and even more glad to see how well it worked out. Maggie looks like she was a perfect passenger.

As you know, my PnP flight this wknd got canceled but I think that wast 100% for the better when you consider all the wx fun we ended up having!

Thanks all....Mary and I really enjoy the rescue flights. I hope we can add a few a month.

Pure luck catching the war birds on the ramp. I think they were all coming from a local show/fly-in.