﻿
﻿ Mary was headed to Alexandria, VA today to spend time with her cousins and check out the 'rock' cousin Kate got for her engagement.  I decided it would be a great day to get some fun flying time, with no flight following or instrument flight plan. I sent a text to Mike B, figured I may want to shoot a few approaches or I might not, we would have fun just tooling around.  I also sent a text to Vince and asked if he wanted to ride along. Vince answered what time and Mike was running a bit late and had some things around the house he had to take care of. I decided to head to the airport.

Vince walked across the ramp while I was finishing up my preflight. We climbed aboard and soon had the fan turning.  My recent Collins fix was acting up, cutting out then coming back online. I didn't know what to think and decided to try and transmit on the thing, it worked, the radio came back online and seemed to be fine.  I'll call Red Eagle Monday morning just to be safe. I made the call to ground and taxied to runway two seven. 08Romeo climbed out and with a left turn on course, we were crossing the Delaware river.
I tuned in the DuPont VOR (DQO) on 114.00 and set the CDI to the 153ish radial for the hop to Cape May. Once level I asked Vince if he wanted to fly and without hesitation he agreed. OK, no GPS today, you're tracking the VOR NAV 2 and maintaining 2500 feet.  Vince is 14 and has a wicked passion for flying, he absorbs aviation info like a sponge and he has been working through the King Private Pilot DVD's I gave him. Vince quickly initiated the transfer of command with my plane and my response of your plane and his confirmation my plane. I made a few finger points (Thanks Mike B) at the altimeter and CDI but Vince held it to PTS standards for most of the flight.
I made the radio calls but should have let Vince try that too, he's really good. I talked Vince through our plan to approach Cape May with a midfield crossing to enter the left down wind for runway two eight.  Another aircraft called  with a straight in for runway one so we adjusted our plan.  Winds were 320 less than 10 knots which favored two eight.  Ok, time to adjust, we will now enter on the crosswind for two eight giving the other traffic some extra space. I remind Vince we need to be at 1000 feet as we enter the pattern. Vince did very well as he turned downwind and base then we transferred controls once again so I could turn final and land. I did ask him to mirror my control inputs so he could feel the landing, and he did.
We taxied to the terminal on the new taxiway recently completed on my project, it felt pretty good. The contractor did a very nice job finishing up with placing the topsoil seed and mulch. The project was cleaned up very nice for the F18 jet demonstration this weekend.  I chatted with Pat in Operations via the bluetooth on my Zulu headset then taxied out for our flight down the Delaware coast to Ocean City, MD. 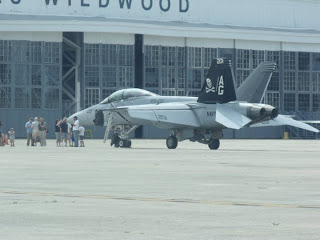 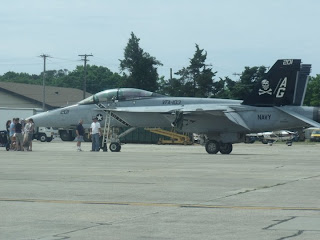 We taxied out to runway two eight and took off after an Archer.  The plan was to circle over the Ferry Terminal and gain altitude then cross the Delaware Bay and head south, south west to Ocean City, MD.  Once I got things squared away I let Vince orbit 08Romeo over the Ferry Terminal and climb to 4500 before turning west to go feet wet. Vince kept a nice orbit in place and we both kept a look out for inbound traffic for KWWD. The path across the bay was easy to follow, I said just shadow the ferry's. Cape Henlopen on the Delaware side of the bay with it's bright sand looked like we could reach out and touch it, no I didn't take a picture.
We started across the Bay and we got about 11 miles from KWWD maybe 4 or 5 miles over the water and I thought I felt the engine run rough, no, not the over water I hear noises, this was a change to the normal purr. We quickly transferred command and I made an immediate right turn for Cape May.  I flipped the radio back to unicom at Cape May and started to flow through my checks. Pump went on, visual contact with the field and no problems getting back. Oil Temp and pressure were good, fuel reading in both tanks, check mixture full rich, then lean a bit and back to full rich.  Pump off and she feels fine smooth as can be. We keep pointed at WWD and with everything looking good I make the decision to cross the bay back to our west south west. I now have KGED, Sussex County dialed in just in case as the miles count down towards our destination of KOXB, Ocean City MD. The escape to GED is now a greater distance then OXB so I am committed, or is that should be committed. We make a wide pass to the north west and set up to enter on a 45* for left down wind runway three two.
Jumpers kicked out of the plane is the call we hear and Vince and I struggle to see the meat missiles, I mean chutes. Vince confirms our traffic ahead as we now advise number three for the airport behind a navion and Cessna, each making extended down winds over the ocean for jumpers landing. I slow up and wait for the Cessna to pass at my nine then turn base, I didn't want to be over the water, low/no altitude just in case. Another smooth landing and taxi back with the jump plane hot on my heals. I went through another run up and everything felt great, 08Romeo hadn't missed a beat since over the Bay. 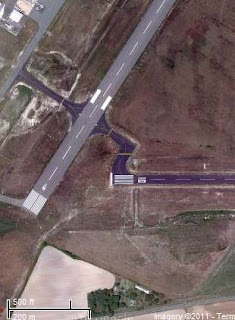 We soon departed Ocean City and decided on a stop for lunch and some go go juice (100LL) at Sussex County, KGED. The thermals were really starting bump us around for this short hop at a lower altitude. I gave the auto pilot a shot at keeping us wings level, it got a heck of a work out but did well. I feel safer hand flying and with a flip of a switch I took back control. I swapped calls with a Cessna inbound for GED who asked, what's the active. I responded with my type and tail number inbound for runway two eight.  The Cessna driver continued in for runway 4.  Another aircraft called in for runway two eight, the winds were 320. I made my pattern calls and advised the Cessna now on base that I would hold short of runway 4 for his landing, the runways don't cross but the taxiway at the end does, at least he thanked me.

The terminal was quiet, not much action, or so it seemed. I got a front row spot as the Lineman gave me parking instructions on the radio to park next to the Gulfstream III.  I responded, I can have the GIII ?  No, he answered but maybe he'll work a trade.  I ordered fuel to the slots since there is a discount if you eat in the restaurant. I took on 10 gallons total.  Vince and I enjoyed lunch and just beat the rush. Apparently the baseball complex adjacent to the airport has tournament play today and teams were starting to file in, in uniform, for lunch. 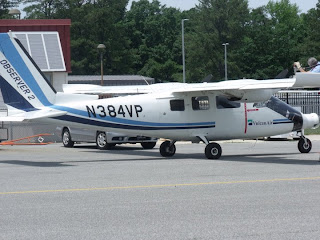 We finished up and headed out to the flight line so we could check out this Vulcanair P68 Observer 2 that taxied in for fuel. A strange looking bird "Observer 2" on its tail and a full glass front end like a helicopter and some radar dish in a bubble on the nose. It was loaded with equipment in the back and truly was a working machine. I seen enough and walked over to 08Romeo for an abbreviated pre-flight. I sumped the tanks since I took fuel, everything was clean and no water. With Vince on board we fired up and taxied out for runway 4. I held short for two aircraft landing, the first barely off the runway at the far end as the other touched down. I made my call to depart and inquired about the aircraft that was shooting the GPS 22 approach with a circle to land. The Pilot advised he was now going to land on 22, he was 4 mile on final. The pilot asked if I could wait for him to land since he was bringing in a patient. Sure no problem, 08Romeo holding short.  There, that wasn't to painful and I guess it counts as a partial good deed.  OK, on to runway four, full power let's go!
On departure I turned north for home. I did pick up flight following with Dover providing my information and dialing in the squawk code as directed. 08Romeo radar contact 7 miles west of Waterloo, altimeter 3001, 3001 08Romeo was the expected response. We were on our way with some extra eyes bumping along.  Vince said he spotted two Blackhawks following the shoreline of the bay or at least he thought that's what he saw. Ok, Mr. Eagle eyes sure thing, (rolls eyes) although he is usually spot on. We passed over the Dover Air Force base and approach dropped us just north. Squawk 1200, recommend Philly approach at 119.75, good-day. One two zero zero, 08Romeo thanks for your help today.

We were maybe 18 miles out and I would be calling the tower at 15 south after picking up the current ATIS info. Wilmington tower advised continue in for three two, I responded continue for three two - 08Romeo. It sounded busy and the mystery aircraft over the Bay were indeed blackhawks as they checked in, a flight of two.  As I turned to my 7 o'clock to get visual on them I saw a Bald eagle pass a few hundred feet below and down my left side, what an awesome sight! I also confirmed the flight of two, Vince had a smile from ear to ear.  Ok, ok you called them out, Mr I have young eyes and perfect vision. 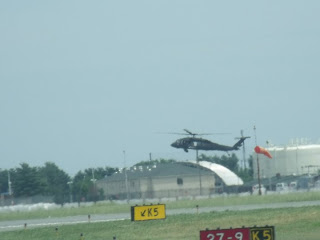 I entered a left base three two, tight to the numbers like the tower requested and was cleared to land. I managed another nice landing. Vince helped button up 08Romeo and I got the bugs cleaned off the leading edges and cowling. 2.9 hours in the book and a good time watching a youngster have some fun at the controls flying.
Posted by Gary at 9:22 PM