It was a typical  work week, dealing with contractors and finishing up paperwork to close a few projects. While working on setting up cost summaries for some new work my email notification went off.  Adam S, MAESSR Transportation Coordinator had sent a request for a possible weekend flight.

" This is another short mission request for a ground transport that is having trouble being filled. This is for Jackson, a 9 year old male who is coming back into MAESSR's care. He's a good traveler and good with people, but less so with other dogs. Take a look and see if this peaks your interest for some weekend flying.

We would like to get the dog all the way down to Louisa, however an I'm putting an alternate drop off location in Frederick MD if that is the better fit with someones schedule. We could get the ground transport to pick up the rest from there. The trip to Louisa is about 175 nm, while the trip to Frederick, is only about 90 nm. This is a Sunday transport. "

I read through the post and decided to give Mary a call before I responded to volunteer our services. Mary was all in, and she was as excited as I am to make the run. I sent my response with information on our availability.﻿
﻿Leg one is from KILG, Wilmington to KSEG, Penn Valley Airport in Selinsgrove, PA. This morning we were heading south for Wilmington ready to have some fun.  Our planned departure is at 8:15am arriving at KSEG around 9:15ish.  The plan is to meet with Ray and Tina and make the transfer of Jackson to our plane. Ray and Tina drove from Montoursville to complete the ground portion of the transport, a big THANKS for making this happen. 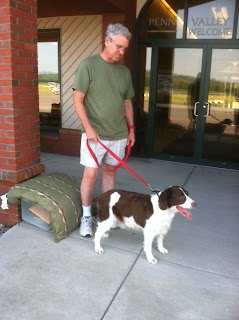 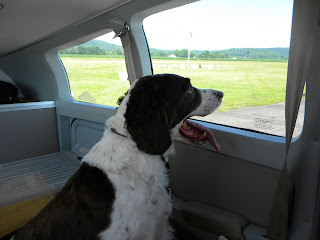 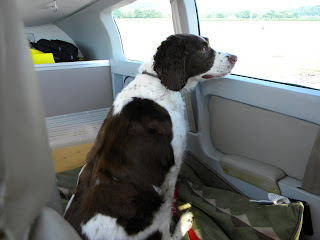 I had filed my instrument flight plan early this morning and picked up my clearance with Wilmington ground. We were soon climbing out for Penn Valley KSEG.  Philly approach handed us off to Harrisburg for the ride along to our destination.  I was maybe 8 miles out and canceled IFR with ATC and made my calls to Penn Valley traffic to advise I was inbound. I did ask the man on unicom if a furry passenger had arrived, he said not yet. 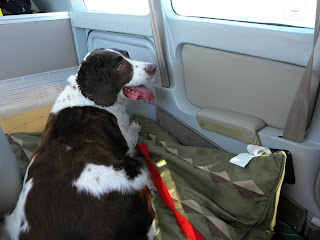 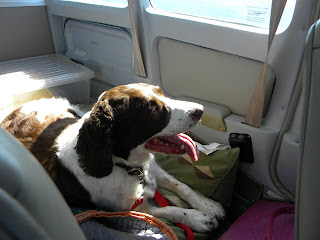 We made our way over the last ridge and made a nice landing on runway three five. It was a short taxi in and we shutdown right across from the terminal. I met up with Ray and Tina and gathered some info on our furry passenger. Jackson was full of energy, he was checking everything out. Mary and i took a few pictures and decided it was time to load up for the next leg south.
I called  Harrisburg on the number the last controller gave me since he advised my next flight plan was waiting for me when we were on our way in to Penn Valley.  I dialed up the number with my bluetooth connected to my lightspeed zulu, what a great tool to have in the cockpit. My clearance was as filed (AF) that was a first for me, no radar vectors runway heading just plain ole as filed.
08Romeo climbed out of Penn valley departing the area between the two ridge lines then turning on course. Harrisburg gave us the go to climb to six thousand and amended or flight plan. ATC gave us direct SCAPE then AF, ok, not to bad just helping us keep clear of the presidential TFR around Camp David. We were handed off to Washington center followed by Potomac for two different sectors. 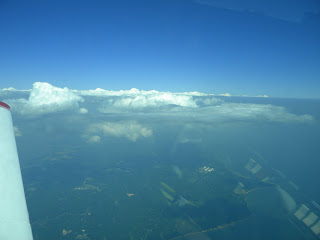 The last Potomac controller had a stuck mic and I heard him ask another person if they can get me direct Louisa (KLKU) and save me some time, what a good guy!!  Sure enough after they figured out the mic was stuck and I got a few vectors for traffic I was turned direct Louisa.  I had entered dog rescue in the comments so maybe that helped. Jackson was still wide eyed, hadn't slept a wink the whole flight. At least he settled right in and was a very good boy. I requested the RNAV GPS 27 approach and ATC vectored me to an initial approach fix BECBA.  Never did figure out why they just didn't give a direct to, who knows. 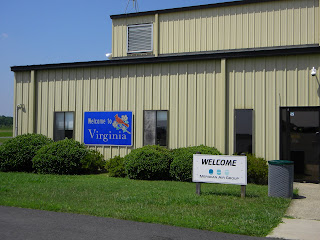 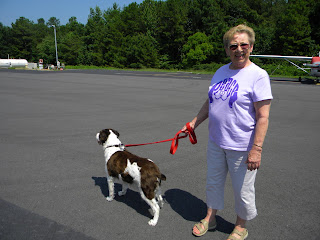 Louisa airport is now over the nose as I make my way down the GPS approach. I canceled in the air and switched over to the unicom to announce my position and intentions. Another smooth landing and taxi back to the terminal. April was tracking us on flightaware so she was already waiting for us at the airport.  Jackson saw her walking to the plane and he started singing us a tune. Mary held his leash while I climbed down the wing and opened the baggage door. Jackson was on the ramp, he hopped out the door like a pro. 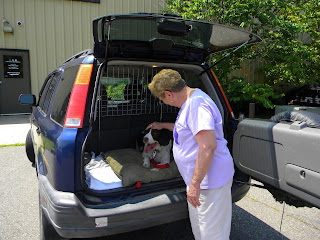 Mary and I helped April load up Jackson's box of info and get his bed situated in her vehicle. With a tap of the hand and a kennel command Jackson jumped in the SUV and was ready to go, a ball of energy. We said our goodbyes, which is always the hard part, but asked April to give Debbie a big hug from us both. Nice to meet you April!! Thanks for helping us out with the pick up. 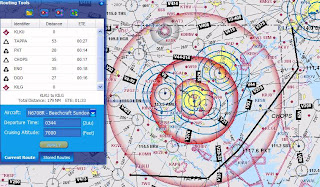 08Romeo need some fuel so I took on enough to bring us to forty. I figured it would be an hour and forty-five home and having some extra beyond the required for IFR gives me a warm and fuzzy. I made a call to Potomac and picked up my clearance for home.  This one is pretty straight forward; launch out of KLKU TAPPA PXT ENO and home. 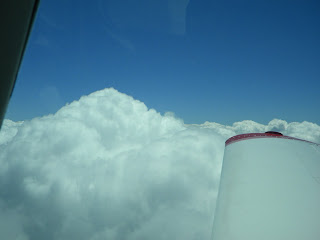 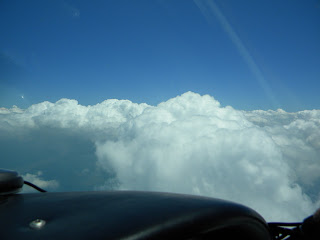 ﻿The flight was really smooth, hands off most of the way.  Once north of TAPPA I did log some actual along with a request to deviate around some build ups, I wasn't the only one. We made our way up the Delmarva peninsula and as usual got lower which stuck me in the middle of the layer.  It wasn't bad a first then we got rocking pretty good and it woke Mary up, I asked for lower. Dover always drops me down lower in their area, must be some feeder for Philly.

Finally handed off to Philly followed by the Wilmington tower, we're almost home.  I reported a right mid-field down wind for runway one nine as directed and finished off the day with a short field landing that was oh so sweet. I had to add power to get to taxiway Kilo.  We buttoned up 08Romeo and headed for home. I did drink water along the way but we didn't make a breakfast stop this morning. With 5.4 hours flying today we were hungry and thirsty. We decided on Johnnies Hot dogs with some root beer that hit the spot!!  Thanks to my lovely Bride for all her help and thanks to the folks associated with MAESSR !!!!
Posted by Gary at 4:43 PM

I never get tired of reading the PnP rescue stories, great job as usual.

We should try and hook up in the middle for a rescue that goes from your vicinity to my general vicinity (or west of here) sometime if the routing works out!

Sounds like another successful rescue flight, congratulations on a mission well done. You deserved that root beer!

Steve: Haven't done a PnP flight yet. So far we have been flying missions for MAESSR, out of the "local"(NJ,DE,MD,VA,PA) area. Everything seems to be in the two hour flight window and thats what we wanted to work under. It would be great to hook up on a longer flight for a hand off.

Chris: The root beer was cold and hit the spot! The cross country time is not to bad but multiple stops in the heat just drain you.

Does the MAESSR list rescue flights on the PnP boards? In my limited experience, it seems like quite a few rescues on PnP are really being 'run' by other organizations. Regardless, yes it would be nice if a mid-way swap ever worked out for us. Shorter flights are all that I can really do right now myself - it's especially expensive as a renter!

what a machine! Power to get to taxi way kilo from l/d 19, commerical grade!