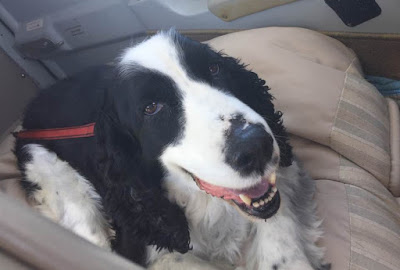 The call went out late in the week for a Mid-Atlantic English Springer Spaniel rescue transport. Mary and I discussed jumping on board and quickly signed 08Romeo up for the mission.

This mission required an initial pick up in Capon Bridge, West Virginia. After a quick search of the area I found two airports that would work for me; Winchester, Virginia and Martinburg, West Virginia. Both airports fit my requirements, now it will be which ever is easiest for the drop off driver, Kriss.

Winchester (KOKV)was the choice so I started on my flight plan. I always want good approaches and runway. Winchester fit the bill so I checked NOTAMS and weather forecast for my planned flight time. 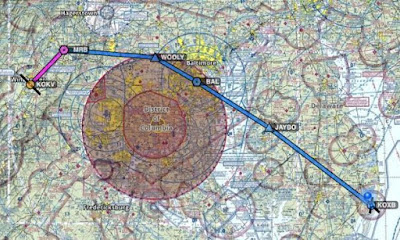 Mary and I were up and out of the house by 7:30 and we made my planned departure time of 8:15. I had no luck picking up my clearance with Potomac clearance and delivery so I launched Visual Flight Rules (VFR) and checked in with Patuxent approach on 127.95. Once my position was confirmed I copied my clearance and was on my way. The ride this morning was smooth and clear. I did get one change to my initial filed flight plan and that was direct Baltimore (BAL) VOR which was basically the exact heading towards my first fix, JAYBO. 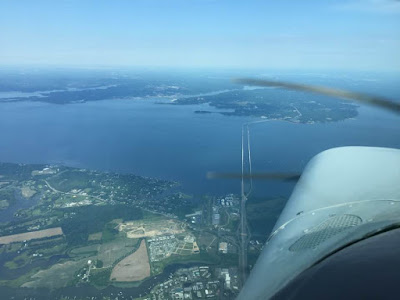 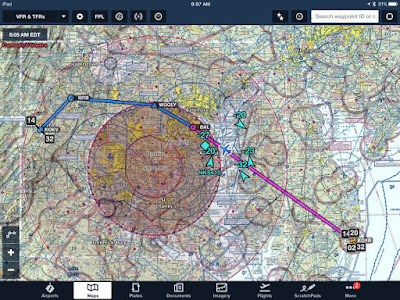 We enjoyed the view of the Chesapeake Bay as we approached the Bay bridges and lost count of all the sailboats north of the bridge. The only thing south was a large tanker looking vessel. Mary and I spotted jet traffic for Baltimore, crossing our flight path (well below)as we passed directly overhead the airport. Once clear of the Baltimore airspace we were turned direct Winchester, this saved some time and fuel. 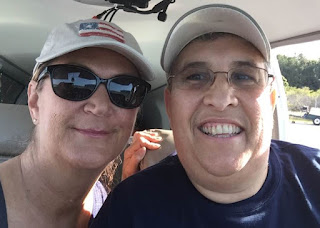 Winchester was busy with traffic coming and going. I announced my position as I approached, working my way across midfield to enter the left downwind for runway three-two.

I made a nice landing and taxied towards a very busy ramp. EAA had a young eagles event and there were planes everywhere. The ground crew did an excellent job keeping the flow of traffic moving smoothly. We shut down in front of the FBO and headed inside to find  our furry passenger. Mary found Kriss and Cole in the parking lot while I made my way through the crowd to the service desk to order fuel for the flight home.

I saw a Mouse (Beechcraft Musketeer) fly in but the tail number didn't register right away. It was Bob P, a fellow BAC member and his plane has to be the cleanest mouse I have ever seen.

Mary and I loaded up both dog beds, a bag of paper work and toys along with a container of dog food. The Sundowner was filled. Cole easily slipped through the baggage door and made himself at home on one of his huge fluffy dog beds. Mary climbed aboard and I followed, it was time to get in the air.

Once again the ground crew was awesome. I was marshaled away from parking and sent on my way towards runway three-two. I pulled off in the run up area and picked up my IFR clearance for the flight. There was a slight change to my initial plan and I had to search for the fix I was given. I had planned to head north-east to the Martinsburg VOR but that was changed.

I advised I am number two and I would call when number one for departure. I quickly zoomed in on the IFR low chart and looked for COGAN, I found nothing. 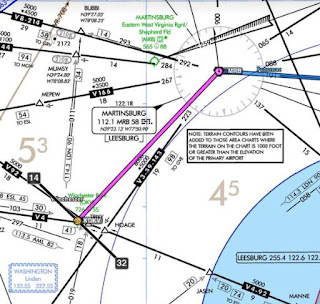 I switched over to the VFR chart thinking it may be a fix listed there for some bizarre reason, nadda. 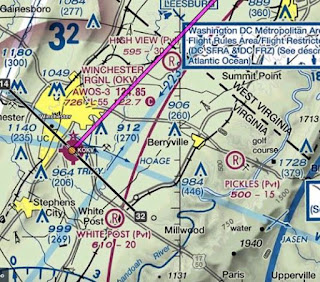 I used the new flight plan feature and clicked on the KOKV bubble and brought up the approach plates and then sent them to the map. First was RNAV 32, sure enough, there was COGAN the final approach fix (FAF)for that approach. 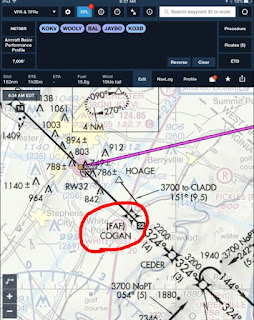 I dragged the course line over, made the change and sent it to the Garmin 530W via the flight stream 210 and was ready to go. 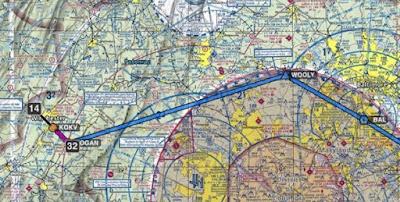 ﻿
Clearance delivery gave me my void if not off by time and I advised I was rolling for runway three-two. 08Romeo climbed out and I departed the area on the down wind, making our way to COGAN and checking in with approach. Potomac approach quickly cleared me to 7,000 and I asked if I could have five instead. The response, "sure can if you want to head west but to go east you'll need seven to clear arrivals." I thought, crap, its hot and 08Romeo has a full belly of fuel. I advised approach, west would be nice, but not today, we'll take that seven east bound. Approach laughed and said "I might be able to step you down after clearing the arrival path for Dulles." It was a long slow climb in the heat. 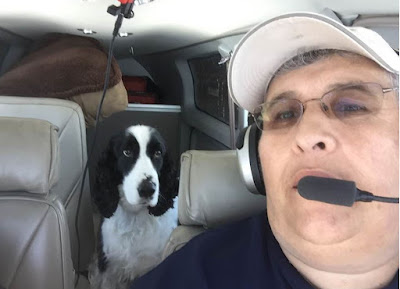 It was another smooth ride but you could really see the haze starting to limit the long distance view. I was handed off to multiple approach controllers as we made our way over Baltimore and the Chesapeake Bay. The last Potomac controller turned us direct Ocean City once clear of Baltimore and we rode along listening to all the radio chatter. Cole did get some sleep but he would sit up and look out the window every now and then.

Once we started to let down for Ocean City the cool fifty degree temps started to climb. By the time we were at three thousand the temp was closing in on eighty. The jump plane was busy and he had just called two minutes to jumpers as I closed in on short final for runway one-four. There was a Cessna holding short as I crossed the numbers and tried to land long for the taxiway closest to the terminal. I cleared as quick as I could and the Cessna had lined up waiting to launch, I heard his radio call. 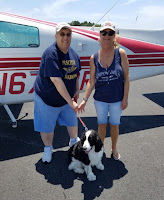 As we pulled in I could see the anxious foster family at the terminal. Caroline and Alan made their way to the plane but I had to motion for Caroline to stop. I didn't want someone to walk near the prop until I was completely shut down with the master off and keys in my hand. Once out of the plane, greetings were exchanged and then we each had something to carry to their vehicle, Cole did not travel light. We took a few pictures and then said our goodbyes, Cole is in good hands.
Mary and I fired up 08Romeo, her mission completed, and taxied her to her hangar. Once tucked away I cleaned the leading edges and Mary cleaned the windscreen. I plugged in the battery minder, repositioned the Ranger pick up and closed the door on the hangar and todays flight. It felt great to fly a mission and a dog rescue made it even better. 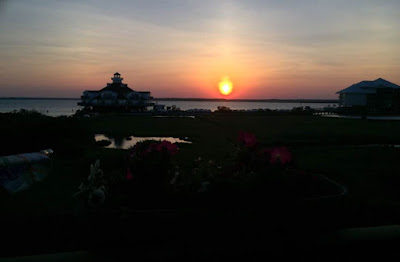 We ended our day with friends Pam & Ted, who invited us over for dinner. The eats were excellent and the company even better. What a perfect ending to our day. We sat and watched the sunset, having some laughs, a few mermaid lemonades and enjoying the time with best friends.
Posted by Gary at 6:38 AM

I love reading about your adventures when you transport. Those pups have no idea how very lucky they are.

We love flying these missions. For all the fun and laughs our guys provide us, it's the least we can do to giving something back.