Chester County for a Quick Drop

Our dear friends Pam and Ted needed to catch up with each other. The only problem was Pam was stuck in Philly after the many delays flying in from Connecticut and Ted was in Ocean City. Despite her platinum miles, American Airlines couldn't find Pam a car or a hotel and there was no flight to get her home. It gets better. Pam is scheduled to fly out of Philly to her final destination of Poland. Yikes, the thought of making the six hour round trip (to/from OCMD)for either of them is nuts. Ted has done so many favors for Mary and I and I have known Pam since I was a teenager, Ted since my early twenties and their daughter is my Goddaughter.

I needed flight time and the chance to see their son Patricks' son was too good to pass up, I volunteered my right seat. I figured with the weather being so iffy in the morning I would get some much needed IMC time and maybe shoot an approach.

We planned for an early departure from Ocean City followed by an early return from Chester County (KMQS). Mother nature had other ideas and we had to sit and wait for a better window to depart OXB then the 7:30am plan.

10am was much better plan and off we went to the airport. I had fueled yesterday afternoon and with a sump of the tanks and a few pre-flight items my checklist was complete. We taxied out for runway three-two departing as the jump plane turned their meat bombs loose at 13,000. It was VFR over Ocean city with a thick haze. As I approached the Waterloo VOR (ATR) I decided to open my instrument flight plan with Dover approach.  Dover cleared me direct DuPont (DQO) and then direct Chester County (MQS). Easy peasy, well, except for all those building clouds. 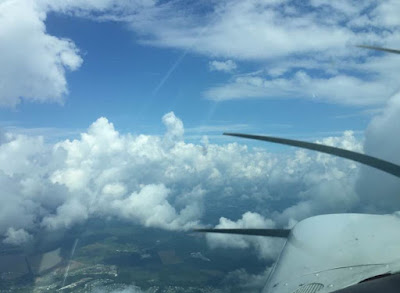 I stayed pretty much on course with small deviations to end around the big uglies. Everyone on with approach was asking for ten or twenty degrees left or right to avoid the build-ups. Once north of Dover and almost to the C&D canal I was handed off to Philly approach. I confirmed I had the weather at Chester County and was stepped down from five thousand to four and then to three.
I was handed off to another Philly sector and then given my approach of choice, the GPS 29 into MQS. Approach cleared me direct GOWZO, maintain at or above three thousand until crossing GOWZO for the RNAV 29 approach.  I got tongue tied and blurted out something stupid then corrected and acknowledged the instructions. Approach must of thought he had a real dip stick flying the BE23. 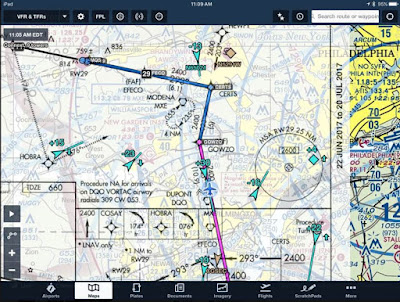 My altitude and course was right on the money and the remaining communications were normal, Thankfully. Once crossing GOWZO and descending to two thousand four hundred I could clearly see beyond the airport. I canceled in the air and switched over to CTAF 122.7 and advised my position for the approach to the airport. I made a nice landing and rolled out long, exiting past midfield.

Pam was waiting for Ted and I at the Signature FBO. Ted and I waved since Pam had their Grandson Jackson with her, watching airplanes. I think he enjoyed all the planes on the ramp and watching his Grandfather climb out of 08Romeo.
We all enjoyed a quick lunch at the Flying Machine Café. It was the first time I got to meet Jackson, what a good child. After we finished up lunch we took a few photos of Jackson at the controls of 08Romeo. I think he liked it.
Ted passed off the contents of the bag, including her passport for her next trip. So, with the mission complete we saddled up for Ocean City and got the fan turning to help with the heat. I did file a flight plan for the ride home but had no luck contacting Philly on the designated clearance delivery frequency. I decided to launch for home and if I needed a pop up clearance I would contact Dover or Patuxent. 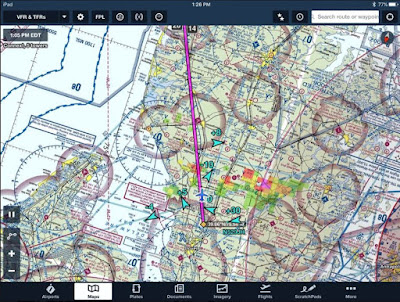 The flight home was at three thousand five hundred, smooth, and below any of the scattered clouds remaining. Once south of Dover, ADS-B painted a storm cell but on the wrong side of my flight path. XM weather was right on the money and once put in motion clearly showed the tracking. Everything was heading east and I had to pass through it. It was a solid black layer which required me to descend from thirty-five down to eighteen hundred feet. We flew through light showers and then one band of moderate, not enough to clean the bug kill off the windscreen. 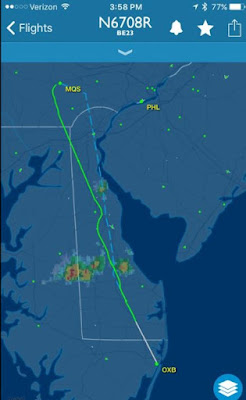 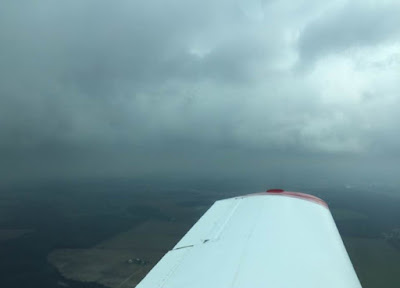 Once clear I gave Dover a second PIREP with bottoms and where we cleared the layer, about five north of Delaware Coastal. The rest of the ride was clear with a scattered layer. I looked north up the beach and could clearly see the magic layer that we are so blessed with here at Ocean City. The layer looked to be from Indian river north.

I entered a left down wind for runway three-two and advised number two behind a Cessna. The Cessna finally made a position call but said right downwind.  Hmmm...I don't think so. I followed along and the young pilot made the left base call but no final call and ended up high, resulting in a go around. That was a good call. I landed and rolled out for the last exit, for the shortest taxi to my hangar. The Cessna made a second attempt and she did a great job getting on the ground.

A fun flight with a little IMC time and an approach that I can't count towards currency. It all felt really good today, natural, ahead of the plane. Hope to be in the air again this week.
Posted by Gary at 3:16 PM