Today's visit to Wilmington was more of an impromptu trip north. Responding to a notice from the taxman, Mary and I had some papers we needed to drop off to my brother for his special attention.

Wednesday Evening
Once we had the mission scheduled I began the weather watching and Mary sent text messages to her niece and her brother so we could visit without just dropping in.

Thursday Morning
We were out the door by 6:50 and had 08Romeo ready to go by 7:20ish.  I had filed for todays flight, thanks to Charles for getting me IFR current, even though it was a relatively short hop. I contacted patuxemt approach on the new remote frequency, noted in the NOTAM's, and picked up my IFR clearance.

All this followed by the usual time now (7:23) 1123, of not off by 1128 contact patuxent by 1158.
I read back the instructions and advised on the roll for departure, runway two-zero. I made my calls on unicom as I departed followed by switching over to Patuxent approach to check in. Once Pax had radar contact I was turned direct Smyrna (ENO) and cleared for 5000'. 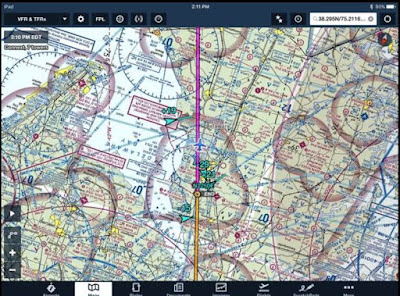 We rode along with Pax for a few more miles then handed off to Dover approach. I checked in and once again settled in for the ride along. Just south of the C&D canal, Dover handed me off to Philly approach. Philly gave me the altimeter setting and the current weather for Wilmington (ILG).  I acknowledged and advised that I had the weather. Philly stepped me down to 4000 and then to 3000, advising me to expect the visual for runway two-seven. Once I had the field in sight I was turned over to the Wilmington tower.
Wilmington cleared me to land well south of the airport, over Delaware City to be exact, it must be a slow morning. As I approached the tower asked where I would be parking and I responded, going to Flyadvanced. I made a nice landing on two-seven and made a U-turn, as directed, on the runway to exit taxiway Bravo. I was marshaled in to a parking spot in front of Flyadvanced and greeted by a NASCAR like pit crew. Our friend Tyler had our rental car on the ramp and had the fuel truck pulled up and ready to give 08Romeo a drink. We always get excellent service from the line crew, I wouldn't go anywhere else at Wilmington.

First stop was to see my brother at his office in north Wilmington. Mascelli Financial Associates handles all my tax prep and it's always nice to sit and chat with my brother about financial planning. I learn something new every time we talk. Mary and I are looking forward to Joe and Janice coming to Ocean City in August for the Beach Boys concert, we always have a fun time together.

Next we headed over to visit with Amy and Hannah and Marys great nephew Brennan. He is such a handsome little man and Mary just loves holding him. While there we got to  meet Hannah's sister and brother, they were visiting from Texas. Really nice family and Mary and I enjoyed our short visit.

Our next stop was to visit Marys brother, Mark and his wife Lynn. Mark is home recovering from another back surgery and it was really nice to catch up. One of the downfalls to retiring in Ocean City is not having quick access to family and friends. We sat and chatted for a good while then decided we should let Mark rest. 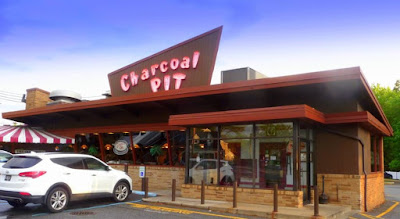 We headed out and gave some thought to a quick lunch before heading to our next stop. As we sat at the traffic light across from the Charcoal Pit, one of our favorites since high school, I canceled the turn signal and went straight across the pike into the parking lot. Mary and I enjoyed a fantastic lunch, this place hasn't changed in the 44 years we've been going there. We each had the Pit Special with milkshakes. Mary had chocolate I had had a vanilla malt, yummy. 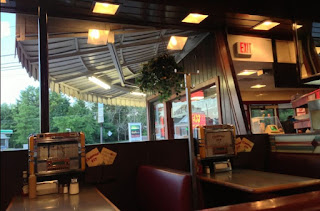 With full tummies we headed to Christiana Hospital to make a surprise visit to our friend JoAn. Jo had a knee replacement and we thought it would be nice to stop in and see her. I motored south to the hospital which would leave us with just a short hop back to the airport. We decided on valet parking for a quick in and out. Once handing off the car keys we walked in and went to the front desk to look up what room Jo was being held hostage. The ladies were very nice and gave us a slip of paper with the room number clearly penciled in, with the added instruction that she was in Christiana Care, Wilmington Hospital, not the Christiana Hospital. Surprise is on us. Mary and I looked at each other...it was a momentary awkward silence followed by an almost stereo, crap! We thanked the ladies and headed back out front. Just to show how fast this really happened, when we checked the valet, our keys hadn't even made it back to the check in station. That was the quickest $5 I ever spent. 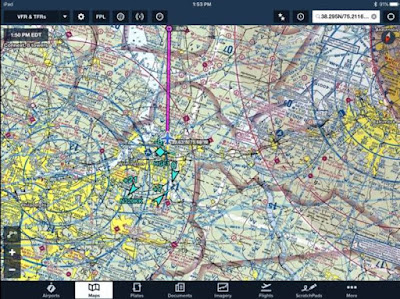 I gave the weather another look and discussed with my Bride. What was moving towards Wilmington was not pretty and the temps were already climbing. We made the decision to head for the airport. Mary left Jo a text message and explained our mix up and that we were headed home.

I rolled into the airport FBO and parked the rental right out front. Mary and I grabbed a bottle of water as I squared up my fuel bill and car rental. Tyler already had our plane on the ramp, he had tucked it in a hangar to keep it in the shade. With a very quick walk around complete we loaded up for home. I did file for this leg and picked up my clearance with Wilmington ground.

I should note here that the recent expected route emails from ForeFlight provided an 'expected' squawk codes, that's a first for me.
﻿
I taxied out as instructed for a Bravo intersection departure on runway two-seven.  I had an aircraft behind me, Hoagie 1, I swear, a C441 - Cessna Conquest 2 (HGE1)owned by Martin's Famous Pastry Shoppe. The ride home was smooth despite clouds building. Philly handed me off to Dover and we rode along until just north of Delaware Coastal (KGED).
﻿

It was strange, Dover gave me a vector, turning me to a 180 degree heading with no reason. I figured I was going to get pushed towards Salisbury and decided I would cancel IFR and fly the last 10 minutes home on my own. Despite cancelling with Dover I was instead directed to keep my squawk code and switch over to Patuxent (Pax). Ahh...what? I didn't clog the airways asking why, instead switched over and contacted Pax. After checking in, I advised Pax that I had canceled IFR with Dover but they still wanted to hand me off. I proceeded, once again, to cancel flight following in my best asking a question voice. Pax advised cancellation received, squawk VFR, frequency change approved, only traffic noted is the jump plane at 9000.  I Thanked ATC and made the appropriate changes.

I made my position calls at ten and five miles north of Ocean City to advise inbound for a full stop runway two-zero. Winds were just about down the runway at 9 knots gusting 14. The jump plane had dumped it's payload of thrill seekers and was now reloaded and heading back out. I advised final 1.7 miles and the jump plane said they were going to scoot out ahead of me. I said you best hustle. The jump plane wasn't even up to the hold short, but was rolling quickly. In one motion she crossed the hold short turned to align and launched. I had pulled the power and slowed, adding the last notch of flaps to try and give some spacing. The Cessna was wheels up as I was crossing the fence, it all worked out.

It was a busy day, but fun. Having the plane made it doable, I could not imagine driving the round trip or making Ziva wait on us to be let out for so many additional hours.
Posted by Gary at 11:00 PM