I parked across from the Assateague Island National Seashore Park Ranger station and walked up to the beach.  Thankfully the parks were open (Free admission) all weekend for Veterans Day. Mary and I really need to get the yearly park pass. This launch was for a resupply mission to the International Space Station. 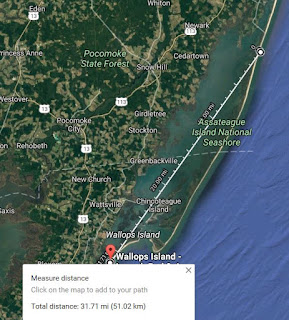 Topped with the International Space Station-bound Cygnus cargo spacecraft, the 139-foot (42.5-meter) Antares rocket lifted off from NASA's Wallops Flight Facility in Wallops Island, Virginia at 7:19 a.m. EST (1219 GMT). About 9 minutes later, Cygnus was deployed in low-Earth orbit, where it will spend the next two days chasing after the International Space Station (ISS).