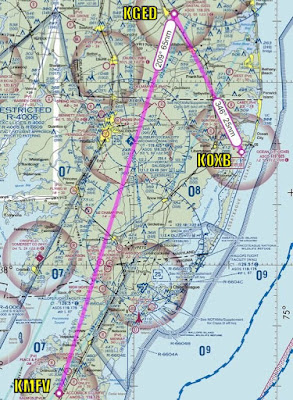 Today I really wanted to get in the air, it's been eight days since my last flight. Yesterday would have been a beautiful day to fly but I just had no mission. I still have a hard time dragging the plane out for no reason except to bore holes in the sky.

Charles and I swapped a few text messages and agreed to meet up at Delaware Coastal (KGED) for some BLT's, airplane chatter and finally a ride in my Commander. My readers should remember that Charles got Mary and I back in a plane and some air time which helped us decided that we still wanted to fly. Charles, I can't thank you enough.

Charles sent a short text that he was leaving, I thought from his home, headed to the airport. Ah, nope. I got an AirNav alert that he was in the air, departing New Garden (N57). I best get a move on!  I had completed a pre-flight this morning and planned for fuel but the fuel truck was offline today. I didn't feel like self serve so with thirty-seven gallons on board I was confident I could make the ten minute hop to KGED.  At Delaware Coastal I could get cheaper fuel, and a discount if I ate at the restaurant, that was our plan.

Another ok landing and I taxied to the ramp to find a parking spot and shut down.  It was good to see the guys at Delaware Coastal, they remembered me, and were happy I was back flying. We chatted for a bit about their Oshkosh trip and planning for next year. Still wanting some fuel, I ordered seven gallons a side and explained the anti-siphon device and the care needed when maneuvering the nozzle to dispense fuel.
The lineman offered a shuttle ride to the terminal and when I arrived I went in to the restaurant to find Charles seated, already downing a cup of Crab Soup. We each ordered a BLT, they are huge with plenty of bacon.  Can one ever really have plenty of bacon?  I think not.

We enjoyed lunch, airplane chat, and then decided for some air time in 3 Tango Charlie.  I was hoping the hot start wasn't going to be an issue. I think it took me three tries and I got 3TC's fan turning.
﻿
We launched from runway four and climbed out, pointing south towards Salisbury, and on to Accomack (KMFV). The view was clear and the ride a bit bumpy hanging below the scattered cloud layer.  I offered Charles flight time but he was enjoying the ride and view. I get that, I love to ride right seat and look out the window too.

Shot by Charles with his cell phone
We landed at MFV so we could look for the video camera that I misplaced. After getting everything squared away we back taxied on two-one and then rolled for take-off, heading back to Delaware Coastal(GED).

I made a nice landing and taxied over to Charles's Piper.  We said our goodbyes, floated a plan to take our brides out to dinner and then he climbed out. I had fun, Charles liked the plane and I'm sure he will safety pilot for me in the very near future.
I closed and secured the door and taxied for runway four. There I sat, third in line, as we all waited for an aircraft on final and one turning base.  One by one we all got out, and I pointed straight for Ocean City. There wasn't any radio traffic, not even the jump plane, so I made a straight in runway one-four. Another nice landing followed by calling clear of the runway, making the slow ride to the hangar and securing 3 Tango Charlie back in her nest.

Next up, our planned trip to KLWN, Lawrence Municipal Airport - located in Lawrence, Massachusetts.  Mary and I have wanted to visit our friends, and finally meet their now two year old son. We're excited!
Posted by Gary at 11:18 PM