Mary and I were scheduled to fly to Wilmington for Christmas but when I opened the hangar door at 8:15 I found a puddle of 5606 (Hydraulic Fluid) stretching from the firewall to the front tire. I didn't feel like dealing with it so I locked up the hangar and motioned to Mary as if I was steering a car.  I then let her know we would be driving north. A two hour drive vs a forty minute flight. 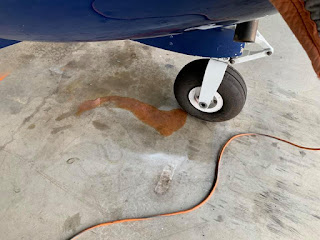 After our return I headed back to the hangar to address the leak. I didn't see it leaking but did find a trail of fluid on the firewall below two fittings.  I checked to make sure both fittings were snug using a line wrench, then cleaned up the area. Next I climbed/crawled into the pilots side floor space and added two syringes of 5605 to the right side master, and one and a half to the left side. This was not looking good. With everything refilled and buttoned up I locked up the hangar and headed home.

Saturday the North East Flyers are going to meet at Easton Airport, KESN. I signed up and figured I would get over to the airport early and finish my preflight by sumping fuel and check for any leaks. I entered the hangar and was looking at the same exact puddle under the plane, again stretching from the firewall to the front tire.  Crap!  I'm grounded. 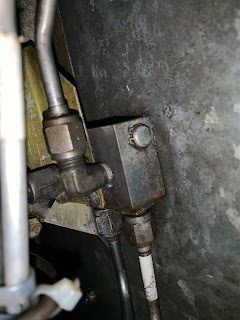 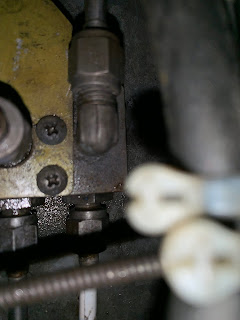 I left things as they were and made a call to a local A&P. An A&P maintenance technician refers to an individual who holds an Airframe and/or Powerplant certificate which is issued by the Federal Aviation Administration (FAA). Fortunately the man I called was headed to the Ocean City Airport to complete work on a Piper Warrior. 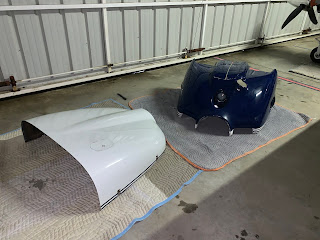 Jerry, the mechanic, looked over the Commander and offered to help with the bottom cowl removal when I was ready. I had removed the top cowl and set it on a moving blanket. I was in the process of removing the screws, nuts, and bolts for the bottom, which is a bit more complicated with cowl flaps and gear doors.

I called it a day, or at least I thought so, and headed home. While I was checking my list of items needed for the repair, Bob C sent me a text from Easton Airport.  Bob wanted to add another leg to his flight today and planned to make a stop at Ocean City once he was finished eating breakfast. I responded I would meet him there and if he had time I would appreciate a hand dropping the lower cowl. He agreed. I threw on my shoes and decided to take Ziva along for the ride and some play time.
I had two screws remaining, finger tight, holding the lower cowl in place. We each removed the screws on our side and lowered the cowl, clearing the gear doors on the nose gear and steering clear of the prop. Its a two man job and Bob saved the day. 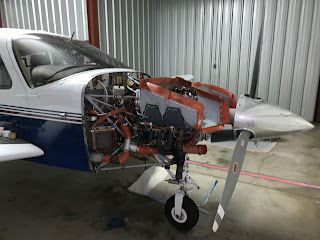 We hung out for a bit watching all the traffic in and out of the airport, it was busy. I loaded Ziva in the SUV and then saw Bob off for his last leg home.
Monday December 30th

I had ordered a repair kit from Aircraft Spruce for the Cleveland 60-5 valve body that replaces A-850-1 previously manufactured by Gerdes. So the parts are here and ready for the install. 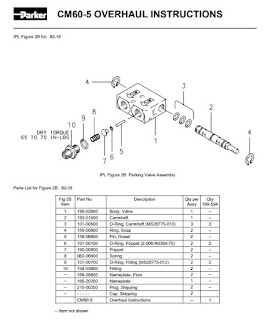 The brake valve unit is located on the co-pilot side lower firewall. 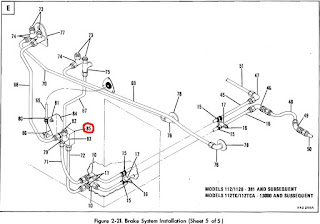 For a better view here is a unit that is for sale on Ebay ($508). I hope my valve is good and only needs new O rings. 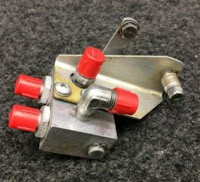 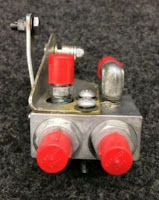 The first call this morning was to my usual shop, Cecil Aero, located at 58M in Elkton, MD. Unfortunately they are short handed with a tech out sick, and the holiday shortened week.

Attempt number two was made to the on field shop at Ocean City. Unfortunately they are slammed with planes in for annual and their mechanic is only part time.

So to relieve some stress I decided to stop at the hangar to clean up the bottom cowl.  There was a white type of grunge or cloudy look to it from the exhaust trail, it had to go. 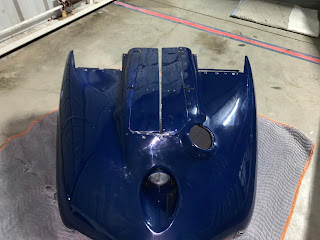 I used a product for boat fiberglass oxidation removal, it's some mixture of polishing compound and cleaner.  It works perfect and with a simple wax on wax off (just like the movie)the cowl looks fantastic. 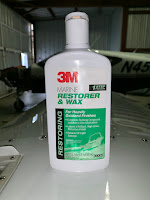 I hope to provide a follow up post, if and when I can wrangle an A&P to do the work. Stay tuned!

What did you use in your cowl? I’ve been struggling to remove exhaust stains from mine and this sounds promising.

Good luck getting your leak fixed.

I should have posted the pictures of the products on the initial post. I added the 3M product and Meguiars in case others wanted to know.