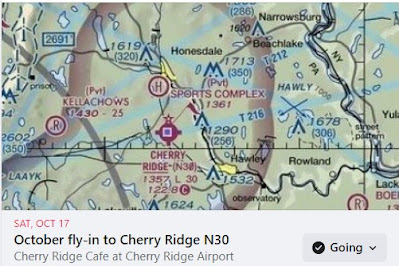 The North East Flyers group posted a fly-in for October to the Cherry Ridge airport located just north east of one of my go to destinations KAVP Wilkes-Bare.  Cherry Ridge is located just outside of the Wilkes-Barre Terminal Radar Service Area (TRSA), the light grey boundary. 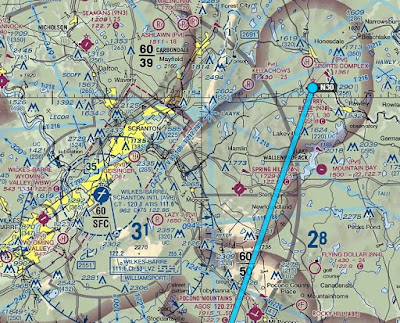 My day started off early, since I planned a stop at Wilmington, KILG to pick up Vince.  It's been quite a few years since we have flown together.  I was excited about having Vince fly with me, just like old times. 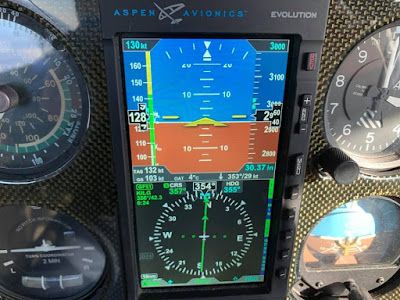 I gave Vince a heads up to be on the Red Eagle ramp at 9:30.  I launched from Ocean City at 8:30, knowing I would be facing a 30kt headwind the whole way, not cool. I finished my run up and launched from runway three-two, enjoying the cool temps. I held my altitude to just three thousand not wanting to waste fuel climbing for the short flight. I had a true airspeed of 132 kts but with the headwind I was only managing 103 kts ground speed.
I had picked up flight following with Dover and once north of the Smyrna VOR (ENO) I cancelled and switched to Wilmington Tower to get that mental picture of traffic around the airport.  Wilmington directed me to enter a left base for three-two call 3 mile. I found this odd since there was a NOTAM noting the runway was closed. Upon further investigation when I landed I re-read it noting SS-SR, sun set to sun rise.
RWY 14/32 CLSD EXE XNG DLY SS-SR 9/30 - 10/31
Vince was waiting on the ramp and climbed aboard. We made a quick turn and contacted ground to taxi out. It was reminiscent of my departure days from red eagle, taxi via Kilo to Mike hold short. Once switched over to the tower 3 Tango Charlie made her run on two-seven and launched for our fly-in destination. 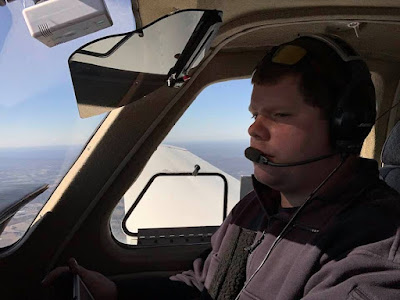 Vince handled the radio work and despite not flying in a while he did a great job. Nothing like getting tossed back into the fire and having to work Philly's class Bravo. 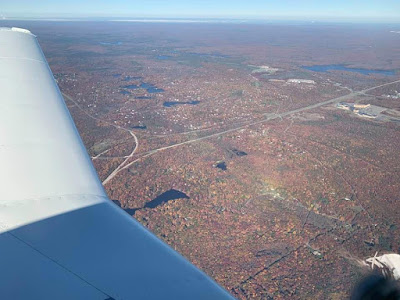 Vince and I each took pictures but nothing beats the live view of the brilliant colors of the leaves changing. Blue Mountain was gorgeous and all the small lakes along the way were surrounded by vibrant colors.  It was beautiful.

Sadly, I didn't have the video on when we landed at Cherry Ridge. Once on the ground and parking secured, Vince opened his door.  Brrr...the cold air rushed in, welcome to north east Pennsylvania's fall.
One by one each plane found their way to the airport. Chris and his Warrior out of Rochester NY was the second to arrive.
Next Rob walked across the ramp, his "wing" was parked in the parking lot. Rob made the fly in by way of his Gold Wing, that's dedication.
The rest of the group trickled in.  Dale in his beautiful Cessna 180 that sounded bad to the bone, Bob C and Bret arrived to complete the attendees. Here are the remaining aircraft.
We were quickly seated with the table reserved for our group.  The service was very good and food excellent. I think everyone enjoyed the lunch and conversation.
As we finished up a beautiful V Tail Bonanza landed and I knew the paint scheme but didn't see the full tail number. I thought it was something Papa Hotel, maybe Adam Z or Dave H. As the Bo taxied in Bob C said that's Adam and his bride Tam, sure enough, it was.  What a treat to see Adam and Tam.
Once we finished up and settled our food bill it was time for some ramp chat and then head home. I had to make a stop at ILG to drop off Vince then head south for Ocean City. 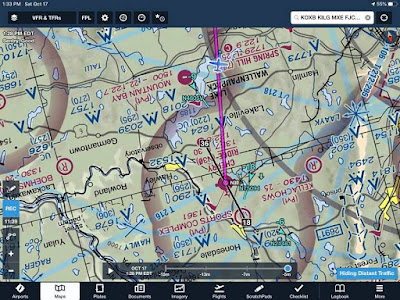 I taxied out and completed my run up and Chris was next in line.  There were planes in the pattern and we watched Chris on ADS-B in Warrior 481 point for home, bottom right. 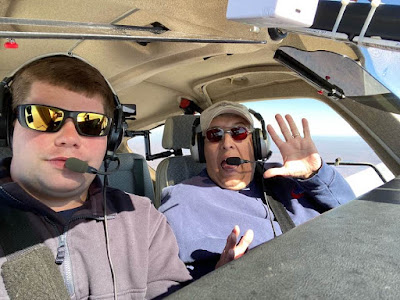 Vince handled all the flying and radio work while I was the pilot monitoring. I have to say he hasn't lost any skills. If there was any rust it surely wasn't showing. It was nice that I got to look out the window and enjoy the view. At least Vince got the easy leg, tailwinds and ground speeds of 150 kts. 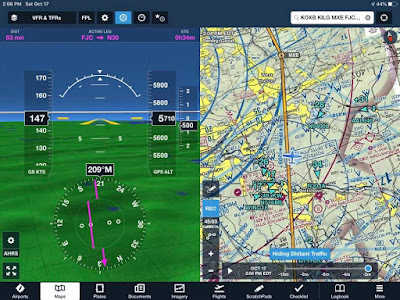 Wilkes-Barre handed us off to Allentown and they handed us off to Philly. Vince had started to let down for Wilmington and as I watched us get closer to the Bravo he confirmed that we were cleared into the bravo. The controller said those magic words and we continued our descent. We did make a slight jog around the TFR for Biden's home and then as directed entered a right base for runway three-two. 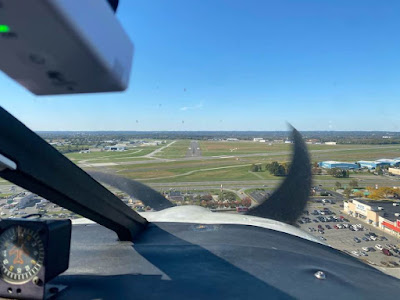 I made an ok landing on three-two and taxied full length for Kilo 6. From K6 I retraced my path from this morning and entered the ramp adjacent to FlyAdvanced Avionics. Vince jumped out and I turned 3 Tango Charlie for home. I departed N30 with 41 gallons on board and with the tail winds I would make the flight to OXB on what I had.
I lined up behind a Cessna 310 and patiently waited for my turn at a clearance for departure. Once cleared I made a right turn out for traffic departing on the down wind, quickly climbing to three thousand feet. I pointed south avoiding the Salem nuke towers and settled in for the last leg home. I did pick up flight following with Dover and cancelled it once past Delaware Coastal KGED.
Winds favored runway 2 and I made my calls as I set up for a long forty five degree entry to the left down wind. The jump plane was just getting ready to boot out their meat missiles as I turned final so I was down and clear before they were an issue.  Overall a great day flying and spending time with Vince. The group meet up made my day, catching up with fellow pilots I haven't seen in a long time.  Chris(Photographic Logbook) and I last  met up at Williamsport in 2014, it's been a while. It was also really nice to catch up with Rob. Covid crapped on our chance to fly in July while he and the family RV'ed at Assateague. Maybe July 2021 we can try it again.
Special Thanks to Bob C for restarting the North East Flyers, it was fun back then, and it's fun now. The turn out was encouraging and as the word spreads I'm sure we will pack the house as we used to.
Posted by Gary at 11:28 AM

It was great to see you after all these years, Gary! 3TC is a beauty.

It's kind of spooky hearing my own voice in one of your videos. Do I really sound like that?? Weird. It's funny, Wilkes-Barre Approach didn't provide my destination information to the next controller, either.

Hopefully it won't be another six years before we find ourselves at the same airport again!

Chris, Thanks! It made my day getting to meet up again, and yes its been a few years ;) You sounded good on the radio, loud and clear, professional even. My mic button was sticky or I didn't hold it in tight enough. It was breaking up on the recording.

Hopefully we can catch up again soon with the North East Flyers group. I may even head your way to help build up some hours for the year, I just broke 40, very sad state. Things will get better and back to whatever normal is, at least I'm counting on it.