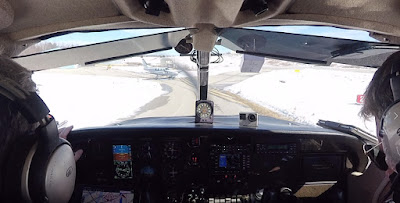 It was a beautiful day, and I just had to fly.

After taking care of Ziva and making some breakfast I turned on 3 Tango Charlie’s preheats with a simple text. I had planned on flying up to New Garden, N57, to fly the two new approaches listed in the latest Jepp update. New Garden has two new RNAV approaches,  GPS runway six and two-four.  I also wanted to catch up with my friend Charles so he could get some fly time, and check out the new GPS approaches, since he is still waiting on his new engine for his Piper.

I headed to the hangar to knock out my preflight and mount my video cameras. As I finished up Charles texted me and advised he would meet me at N57 in an hour. 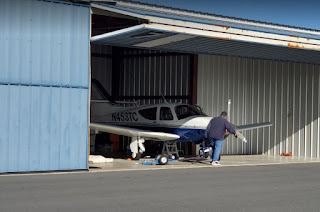 Perfect, I had already hooked up the tug and just needed to get the hangar door closed. 3 Tango Charlie started on a few blades and I got to the first of my tasks. Did I mention how much I miss my FlightStream 210? I chugged and plugged my simple flight plan in the GNS480 while oil temps came up. I  picked up the weather and got the video rolling, it was time to taxi out to runway two-zero.  Runway 14 - 32 is still NOTAMed closed during the weekdays.

I launched into a beautiful blue sky, turning east for the coastline and then north, enjoying the view. I had one ADSB target, the WBOC traffic helicopter. 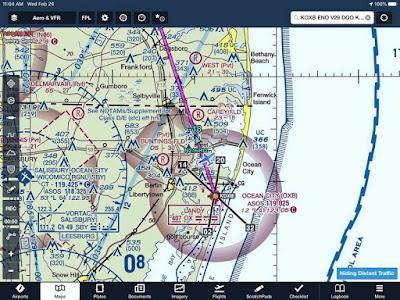 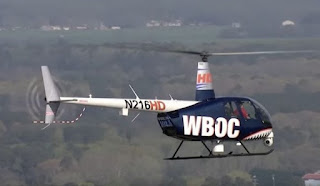 The flight was smooth and traffic minimum, at least until Dover.  I saw some activity around Delaware Coastal (KGED) so I picked up flight following advising I was west of the waterloo VOR, level at three thousand. 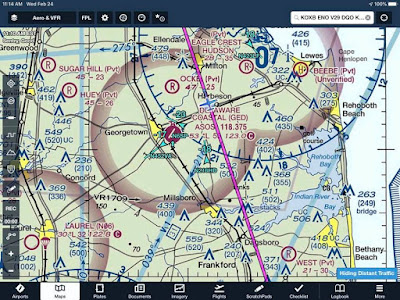 Dover acknowledged and passed along a squawk code but the, I'm assuming, trainee Controller didn't give me a altitude setting. I would have asked but the next aircraft that checked in received the info and I just made a slight adjustment to what Ocean City had reported. 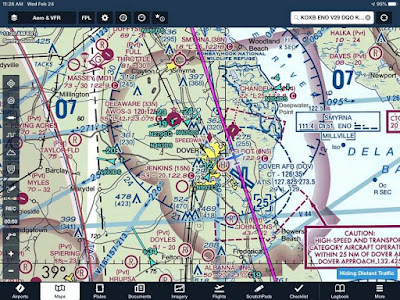 Once north of Dover I crossed that magical line for weather and the ride became bumpy, at times uncomfortably so.

I was handed of to Philly approach and attempted to contact them multiple times but could not hear them. I heard everybody else checking no problem. I decided to try comm two, and I heard approach ask if I was up. I responded and advised trying multiple times but could not hear them, now trying comm two. I switched back to comm one and by now they were loud and clear, not sure what was up with that. I eventually canceled once I was ten or twelve miles from my destination. 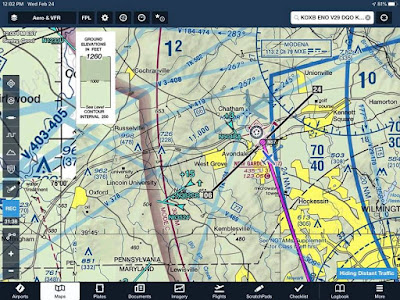 I made my calls for New Garden, same CTAF as Ocean city, 123.050. 3 Tango Charlie settled into the down wind and flowing through the GUMPS check I soon turned final. I made a nice landing and rolled out, not needing to use up brakes since there wasn't another aircraft landing after me. There was activity around the self serve tanks and I noticed Charles was standing along the taxiway adjacent to the ramp. This would be a pick up one and go, no need to even shut down. Charles approached the plane from the rear and climbed aboard, we were soon ready to roll.

First up after we launched was to get Charles some stick time. I was head down loading the new RNAV approach on the Garmin 480 since I updated my GPS data card one day early. I also had to make the same change, deleting the Pennsylvania terminal procedures on my iPad so the updated data cycle could be active. We were all set and ready to shoot the RNAV GPS 24. Charles and I swapped control and we were off for the initial fix ZEYNU. 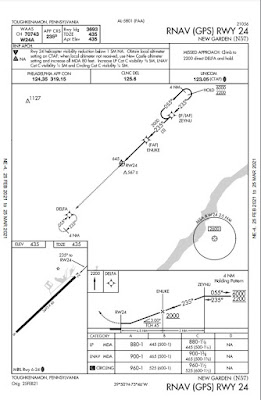 Traffic was picking up but we made our way to the initial fix and then after the procedure turn, which wasn't the most crisp PT, we pointed inbound for the final approach fix (FAF) ENUKE.  Who comes up with these names?? 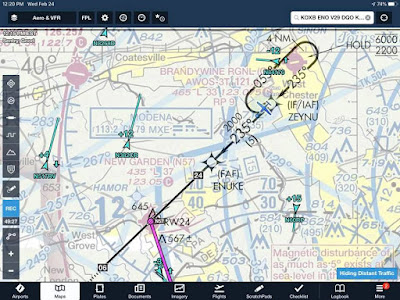 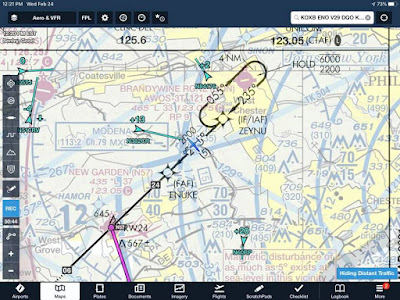 We decided to break off early once past the FAF and head out north north west to now try the GPS 6 approach. 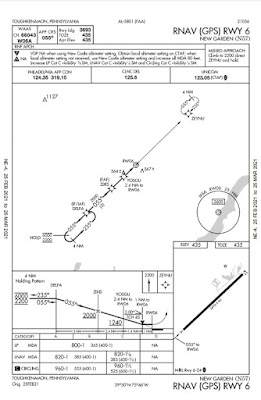 We transferred controls again while I set up for the GPS 6 approach, direct DELFA. We had a traffic conflict and had to change up our course to avoid one aircraft before heading to DELFA. Charles spotted the traffic pass by our right side low. 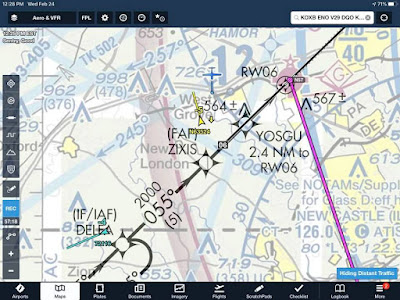 My procedure turn was much cleaner and we headed inbound for the FAF, YOSGU, before stepping right to join the pattern for runway two-four. I made a nice landing turning off on the first taxiway since there was a plane on final behind me. 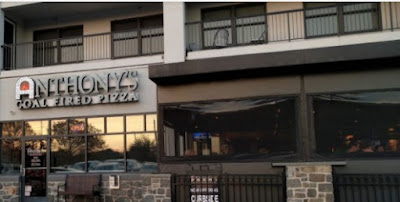 We decided on lunch at a local place. Anthony's Coal Fired Pizza. The food was excellent and it gave us time to debrief the flight and catch up along with planning on places to go with our brides in Ocean City. 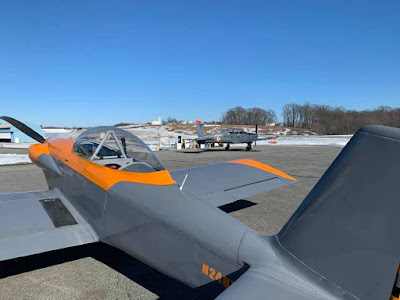 Charles retuned me to the airport and we chatted with a regional pilot flying an RV that was waiting to fuel at the self serve. I didn't want to start up since we were tail to tail on the ramp. Once clear, I climbed aboard and started 3 Tango Charlie. I didn't use the cowl plugs so she was cool which required some hold time to bring my oil temps back up to a safe operating temp. While I waited I set up the video cameras and reversed my flight plan from this morning on the Garmin 480 with a simple press of a button.
I taxied for the T-Hangars just past the runway so I could do my run up. This required a dance with a pick up truck waiting to get by. He moved over, I taxied by and started my 360 to point back at the taxiway to the runway and the truck turned in unison passing by my left side. We both laughed as we passed by each other.
Once my run up was completed I announced departing runway two-four and off I went. It was a wild bumpy ride climbing out with serious windvaning. The ride remained bumpy all the way past Dover then conditions finally settled down. 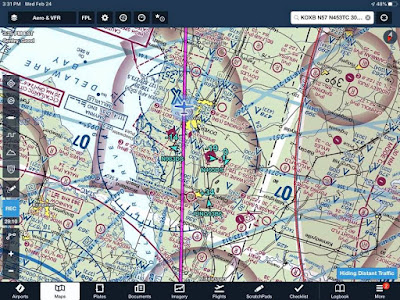 No flight following on the way home but I did monitor Dover approach and guard. Once I passed Delaware Coastal I started down for Ocean City and switched to OXB's CTAF. I made my calls at ten and five out blending in with traffic. First for the airport was the Kilo November King Air, a frequent visitor, followed by a school plane entering in the pattern.

I figured on being number three for the field. The Cessna made her calls and with the current NOTAM's the King Air had to back taxi. The young lady advised turning final and the King Air pilot said he had to back taxi and advised maybe a 360, obviously for spacing/timing. The Cessna continued in advising they would go around and the King Air said he was good as long as she didn't get to big in his wind screen. It was a friendly exchange, both keeping it light but professional. I continued in and made my landing just past the aiming point bars. With a quick turn around I taxied back to cross the closed 14-32 and taxi to the hangar.
Posted by Gary at 10:30 PM